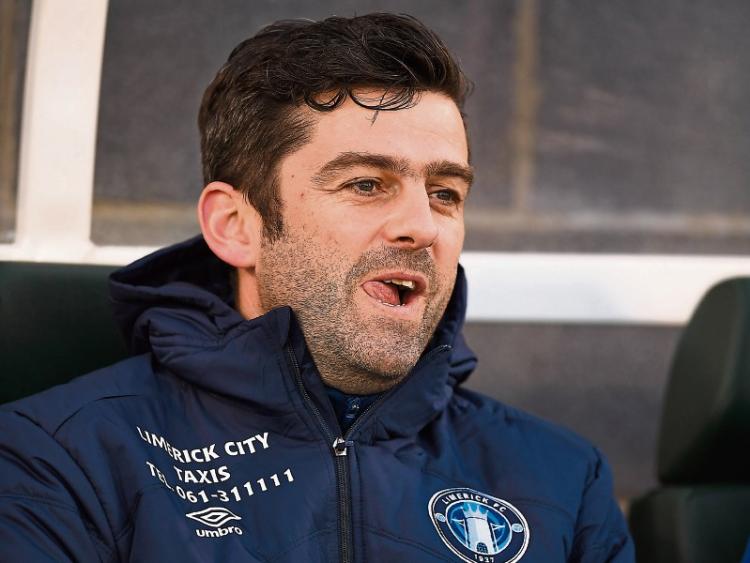 LIMERICK FC’s sole focus switches to the SSE Airtricity League Premier Division for the remainder of the season to securing top flight survival after the ‘Blues’ FAI Cup exit at the hands of high-flying Dundalk.

Tommy Barrett’s side suffered a heavy 4-0 defeat to Premier Division leaders Dundalk in their quarter-final of the FAI Cup at the Markets Field on Friday.

The relegation threatened ‘Blues’ must now regroup quickly for a Premier Division meeting with Shamrock Rovers at Tallaght Stadium this Friday, 7.45pm.

Limerick enjoy a nine-point lead over basement side Bray Wanderers who sit in the automatic relegation position in the table.

The ‘Blues’ are 11 points behind eighth-placed Sligo, so it looks odds-on that Tommy Barrett’s side will be involved in a two-leg relegation play-off with a First Division side at the end of next month to decide their fate.

Limerick FC manager Tommy Barrett said: “We need to get a few points on board first to make sure we get into that (relegation) play-off.

“I think between four and six points probably should do it, hopefully.

“First and foremost we have to perform well and stop conceding silly goals, cut out the goals.

“We are not going to face any better team that we did on Friday in Dundalk.”

Barrett said that he could not afford to rest players over the final weeks of the regular season with one eye on a likely relegation play-off.

“I don’t think we can afford to rest anyone, we haven’t got the squad to do it.

“If we are in the play-off and hopefully we are, we have Waterford on the Friday night away and then we have whoever we play in the play-off on the Monday. That is a concern obviously.

“If we do get to the play-off that is something we have to think about.

“We have to get as many points as we can over the six remaining league fixtures, keep it as tight as possible and perform as well as possible, keep some kind of momentum going, even if we do lose or draw games, the performance levels are kept to a high standard.”

Barrett believes Limerick can take something from Friday night’s trip to Tallaght to face Shamrock Rovers.

Limerick boss Barrett will take encouragement from how his young charges battled right to the end of Friday night’s Cup defeat to Dundalk despite falling four goals in arrears.

“We were unlucky not to score. To me, there didn’t look to be anything wrong with the ‘goal’ we did score that was disallowed.

“The ‘keeper, I think, those decisions go against us every week.

“The teams at the team, whether it is cleverness from them and managing referees and how good they are at it, or it is human nature from referees, they go with the favourites, I don’t know, but it seems to go that way anyway, they don’t give those decisions.

“In saying that, I felt he could have given Dundalk a penalty at one stage as well.

“We came up against the best team in the country in Dundalk last Friday night, we gave it a go, but they were better than us.”

Table toppers Dundalk are 49 points ahead of Limerick FC in the Premier Division table.

Limerick FC hope to have Killian Cantwell available for selection for Friday night’s trip to Tallaght to face Shamrock Rovers.

A decision on whether Shaun Kelly will be available to play will be made closer to kick-off time.

Eoin Wearen remains four or five weeks away from a return to action.

Shamrock Rovers currently sit in third place in the Premier Division table, some 25 points clear of Limerick. The Blues did secure a 1-1 draw with the Hoops in Tallaght in April.

Meanwhile, while Limerick had provided a stern test for Dundalk just seven days earlier in their Premier Division clash at the Garryowen venue, the Blues were a well beaten side when Dundalk came back to town for Friday night’s FAI Cup clash.

Since winning at Oriel Park under Stuart Taylor in September 2013, Limerick have now lost 13 and drawn one of their last 14 meetings with the Co Louth side.

Right from the kick-off, the gulf in class between the sides was obvious. Limerick had fought bravely a week previously when succumbing by a single goal to the Premier Division leaders.

However, this never looked being a night when a spirited Limerick would end their five-year search for a win against the Oriel Park side, who are closing in on their fourth Premier Division league title in five years.

To put the clubs’ seasons in perspective, Dundalk sit a whopping 49 points ahead of ninth-placed Limerick FC in the Premier Division table.

From the time Patrick Hoban put Stephen Kenny’s Dundalk side in front after just five minutes, the Lillywhites took control of the contest.

A second Hoban goal in the 20th minute and one from John Mountney eight minutes before half-time had the visitors 3-0 up at half-time and effectively through to the semi-final draw.

To be fair, Limerick’s young squad battled bravely to the end of the game against experienced opponents whose playing budget is significantly higher.

The ‘Blues’ deserved to score at least one goal in the second half. However, it was yet another one of those nights this season when the home side just couldn’t convert even one of a couple of really decent chances.

Limerick will be glad to see the back of Dundalk this term, as the ‘Blues’ have conceded 20 goals in their five league and Cup games.