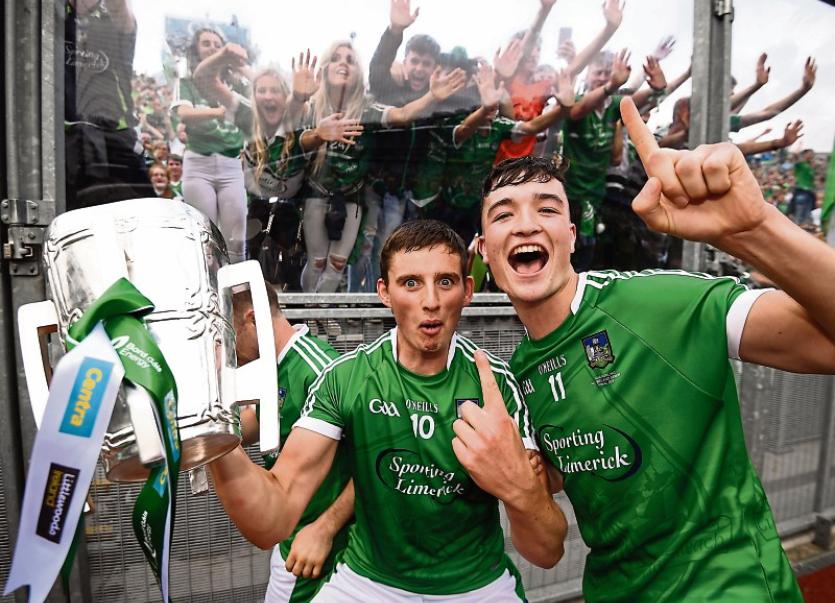 The Liam MacCarthy Cup is just about coming to terms with his long overdue visit to County Limerick.

The city and county have changed since it last rested in Limerick but one thing is very clear, the people of this county are overjoyed with having the famous cup and title back in Limerick.

To be honest we had no idea how this win would affect us. Those final moments in Croke Park have provided people with cherished memories that they will never forget. It was a venting of so much emotion, the pain of many defeats of the past still lingered in the body, many thought they would not see Limerick winning before they died and it shows just how much the game of hurling means to some people.

Once the cup touched down at Limerick railway station it became very real for supporters. For so many it was something they had not witnessed before and they savoured every minute of the journey to the Gaelic Grounds. The scenes were magical and it was great to see thousands of people on the streets and in the Gaelic Grounds engulfed by the celebrations. They came in wheelchairs, bikes, cars and by foot to see our hurling heroes. They scarcely believed it could happen and now that it was real and the enormity of it was sinking in.

In every part of Limerick the win was celebrated, it was especially celebrated by those clubs who had players on the team. For parishes to have a man playing for the county is a big deal but if they go onto win an All Ireland medal then those people walk a good bit taller. You have to have a fair bit of quality to play at county level and from the time a small boy puts ash in his hand that is his desire. Many have such desire but only the select few can enjoy the honour of wearing their county colours.

Our lives are a tapestry of our experiences and all Limerick people both here and around the world will feel fulfilled by this All Ireland hurling win. This has been an extraordinary year for hurling and it’s great to see Limerick sitting at the top after such a competitive championship. It was a summer of summers in many ways and it came and ended before we knew it but the prize collected in Croke Park will also help shorten the winter.

Limerick have won eight senior All Ireland titles. The first was won by a Kilfinane team that represented Limerick.

It was fitting that Richie McCarthy would be a member of the Limerick team that won this season.

Twenty players saw action against Galway and over the 8 titles it brings the total of 129 All Ireland medals to those that played. Over the 8 titles won 35 clubs were involved. It’s no surprise that big clubs will always have a greater chance of having players on Limerick teams but this year we saw the value and contribution small clubs make.

They are the lifeblood of small communities and they need to be protected, helped and encouraged to a greater level. I have such admiration for those great people working so hard with small clubs. Some of them soldier for years and often it is the same people keeping the torch lit during difficult times. Small clubs played a key part in Limericks latest All Ireland success. Stating with Nicky Quaid in goals. His club Effin have had good days and many bad days but they never stopped providing enjoyment for young players. Men like Ger Power, Mike and Donal Kelly, Jim and Joan Moloney. Mike Carroll and the Donovans, like many others also made a fine contribution. Indeed the late Tommy Quaid, his wife Breda and their sons continue to deliver.

We can only imagine how the people of Knockaderry felt when Tom Condon caught that high ball in Galway’s last attack in the All Ireland final. Their chests were filled with pride and excitement. A small club in West Limerick had produced a hardy warrior that always played with a bit of steel. His father Sean Condon has given much to the club as have the Downes, Tom and John Sheedy. The battle for small clubs like Knockaderry will never be easy but for as long as young boys are brought to the sport field they will be told of Tom Condon.

In the days prior to the All Ireland final Kildimo Pallaskenry had an “Up for the match” at the Seven Sisters. It was a very special evening and it looked like the entire parish had come to hear the views of some experts but also to support Kyle Hayes and Barry O’Connell. The club has enjoyed great success in recent years and that has played a part in producing players like Hayes and O’Connell. Over many long years both sides of the parish were lucky to have men that saw the importance of gaelic games in young lads lives. George O’Rourke, Michael McMahon, Pat Kelly, Jim Carmody, Billy Chawke, Mike Dillon, Eddie Lunn and many others kept the flag flying in Kildimo. John Hayes, Pat O’Connell, DJ Daly, Stephen Downey, Tom O’Connell and Eammon Enright were just some of the names that always kept the flame burning in Pallaskenry. The clubs joined in recent times and a new generation of people are now leading and doing great work. All of them and others are still dizzy from the effects of that famous win in Croke Park.

When I think of St Patricks one man stands out. Jack Sheenan worked hard to foster the love of gaelic games in the city. Few would have taken as much joy as him last Sunday and how proud he was of Gearoid Hegarty. Paddy Quilligan always operated below the line but his club meant a great deal to him. Others like the late JJ Kenneally made a massive contribution to St Patricks. Tom Downes, Sean Maher, the Mullins family and so many more will be fulfilled by this win and it will help them continue the drive to make hurling and football a part of everyday life.

Seamus Flanagan was one of the heroes. His powerful running and overall work rate made life really difficulty for Galway. His club Feohanagh has a long tradition of providing players to Limerick teams and his father John and Tommy Quaid travelled many a road together. Men like Pat O’Donnell have given outstanding service to his club and indeed the GAA in Limerick. Der Doody and the late Rory O’Donnell and current chairman Pat O’Brien and a host of others will make sure the game of hurling will always have a part to play in the lives of young boys in this parish.

David Reidy of Dromin Athlacca had a happy return from Kildare and enjoyed a good year. Names such as Walshs, Kellihers and Neenans come to mind in this club and they will use this win to build players for the future. William O’Meara didn’t see any action but for Askeaton/ Ballysteen they will take pride in the fact that he was very much involved.

The club is the bedrock of the GAA and their importance must never be taken likely by County Boards or indeed at national level. We are entering an era where many small clubs are struggling to survive but a way must be found to keep them relevant.

The Junior hurling championship in Limerick needs to be looked at and expanded. The intermediate grade needs to be got rid of and this will ensure better games and a harder championship to win. Our clubs are our identity and when you see young men run out in Croke Park the reality comes to the fore.

JJ Kenneally past away just a few months ago but his family made sure he would be part of the All Ireland final last Sunday. JJ didn’t miss too many Limerick games during his lifetime and his family took the opportunity to bring his ashes to Croke Park on hurling's biggest day. Limerick winning would have made him very proud and just as he lived JJ didn’t miss too much.