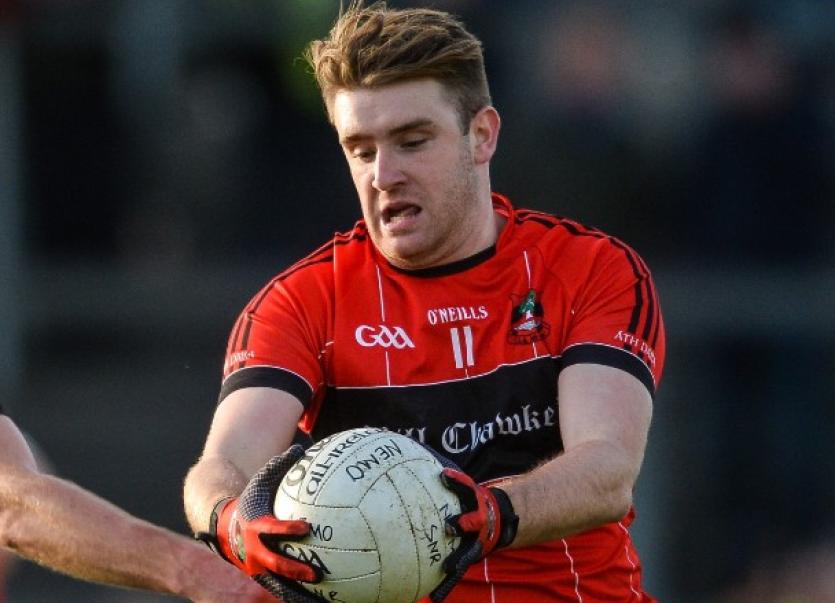 THE knockout stages of the Limerick SFC are a little clearer after this Wednesday evening's rescheduled Round 4 group games.

Champions Adare have booked their place in the semi finals with a game to spare after they maintained their 100% record with a 2-13 to 1-4 win over Na Piarsaigh.

Also this evening, Newcastle West had an emphatic 5-17 to 4-3 win over Oola, while St Patricks and Ballysteen finished level 0-14 to 1-11.

Adare were 1-6 to 1-2 ahead by half time with Shane O'Connor getting their goal in response to an Eoin Hogan penalty goal for Na Piarsaigh. But the champions then took over with points from Davey Lyons and colleagues before a Hugh Bourke goal five minutes from time sealed the win.

Newcastle West scored two early goals, Mike McMahon and Eoin Hurley, but by half time Mikey O'Brien, John Bourke and inter-county hurler Pat Ryan had hit back with Oola goals to leave it 2-7 to 3-3 at half time.

Adare will now top Group One. Elsewhere in this group two from St Senans, Ballylanders and Monaleen will advance to the quarter finals.

Na Piarsaigh, Dromcollogher-Broadford or Monaleen will finish bottom and be involved in a relegation play-off. The final round games are Adare v St Senans, Monaleen v Drom-Broadford and Na Piarsaigh v Ballylanders.

In Group Two, Newcastle West and St Kierans have four wins from four and will advance to the knockout stages. The west Limerick sides meet in the final round to determine who progresses directly to the semi final.

The losing side will be a quarter finalist, along with either Fr Caseys or Ballysteen, who meet in a winner-takes-all final round group game.

The remaining game in this group, St Patricks v Oola, will determine who finishes bottom and plays in the relegation play-off.

The final round group games take place on the weekend of September 15/16.