John Kiely’s route from the Galtee mountains to Limerick glory 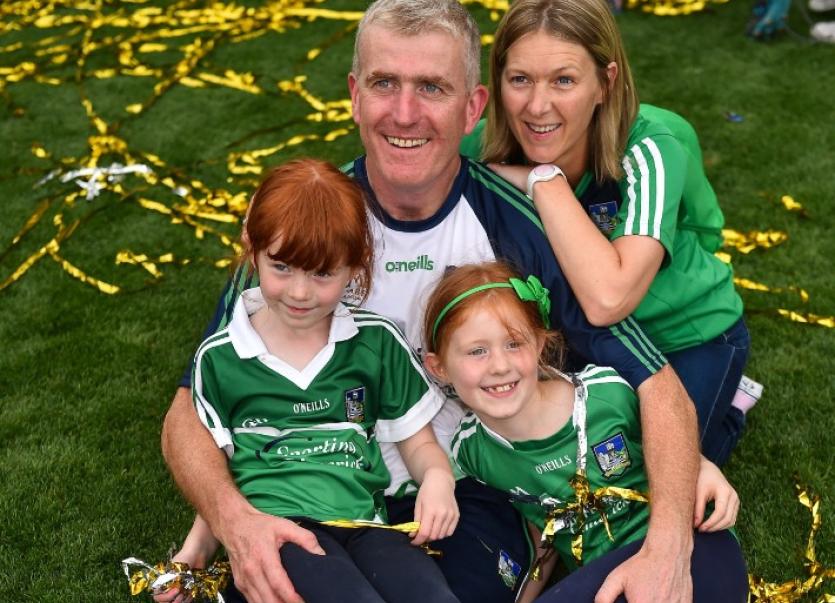 A special moment for the Kiely family in Croke Park

THE outline of the Galtee mountains is just about visible amid the darkness of the summer sky as John Kiely stands pensive in his back garden.

Unable to sleep until the latest conundrum had been solved, the 1am or 2am visits outside his Galbally home provided Kiely with the peace needed plot a journey to hurling’s summit.

“We were always the bridesmaids, but today we got over the line,” rejoiced Kiely, reflecting minutes after the final whistle at Croke Park.

Principal in Tipperary Town’s Abbey CBS, Kiely is a former Limerick senior hurler and footballer, an officer with his own club and a passionate GAA man who was well aware of what had been accomplished.

“I said it after the game — this is not the end, it’s the beginning. I’m just so thrilled for all the young kids that are at home this morning in Limerick because that’s the real dividend from this. That spin-off for the thousands of youngsters that are going to go around with hurleys this week, next week and the week after, dreaming of being Cian Lynches and Shane Dowlings and Peter Caseys. And not thinking they should be Seamie Callanan or Patrick Horgan or Henry Shefflin, even though they’re great players. They have their own standards and their own heroes,” said the All- Ireland winning manager when speaking with media on Monday morning at the team hotel in the Citywest Hotel.

“It’s hugely important because I know the benefit it brings to a whole county, where it be a county community or a village community or a town community or a school community. These things lift people and give people a great sense of satisfaction and pride and happiness and they need it,” he said.

Publicly, Kiely steered his charges away from any talk of history throughout this campaign, but stressed that the men of 1973 will not be forgotten.

“Ah yeah, listen those lads were probably very anxious to pass on the mantle. They were ready to do it in the 1980s, they were ready to do it in the 1990s, it just didn’t happen. They’ve been great, they’ve been great. Even last night in the banquet, they were so understated, they were so behind the scenes. Eamonn Grimes spent 10 seconds with me because he didn’t want (the limelight), he was just so happy to have it passed onto Declan. They were great, they were incredible. They’re incredible men. We would have spoken about it from time to time and the fact that they were just human like us and they managed to do it, so why not? That was it,” explained the former Garryspillane Limerick SHC winner.

“It’s just an awful pity it took so long. We had fantastic teams in the eighties — 1980, 1981, 1994, 1996, 2007. Those groups would have fancied themselves other years but you had the knock-out situation. They were great teams, great players, but various bits and pieces didn’t go for them. It’s a pity it took so long.”

What of the final itself? So much had been spoken and written about the ability of Galway to build early leads, but it was underdogs Limerick that set the tempo.

“We just wanted to get into the game, I didn’t want a big lead early doors because it becomes a weight on you. We saw with the eight point lead, it’s an incredible thing when the momentum shifts back to the opposition, it’s so difficult to stunt that momentum and reverse it,” explained the manager.

In the final quarter, the Galway purple patch did arrive – Limerick leading 3-15 to 0-16 at the time.

“We spoke about that all year, the need to respond at key moments when things go against you - Richie Hogan’s goal in Thurles, here against Cork when we were six down with eleven minutes left. Something had to happen. Sometimes when you have a big lead, when it starts to trickle away, the crowd senses the blood. We had it ourselves against Cork — we smelt it, ye probably smelt it above. It was slipping a bit,” he said.

“It slipped a bit today but we just managed to squeeze enough of a response to hold our ground.“That key ball Tom (Morrissey) caught, the ball Graeme (Mulcahy) won and got a point from - we managed to win just enough balls and to get those shots off to deter Galway and to withstand that onslaught.”

The proud Galbally man did accept the pain of the late tension, however.

“I’m not going to lie to you, I was a sub in 1996, on the panel in 1994, and I saw it happen in front of me. I’ve seen it happen in front of my eyes. You can’t block it out - you just acknowledge it and park it. Something else will happen to take your mind off it - someone will say something or you’ll notice something yourself and you’ll get distracted from that thought, as it were,” he revealed.

Kiely might find himself back in the garden next winter, but any conundrum will be prefixed with the tag of champions.

“I suppose obviously we’re going to have to keep an eye out and look out for fellas. The most important thing is that they look out for each other and we spoke about it coming back on the bus, humility is one of the great attributes that all the great teams have had. If you look at the Kilkenny teams for the last 15 years, the humility that those fellas have shown is an example to all players I think. They’ve carried success very well on their shoulders and the challenge to these boys is to be able to carry their success on their shoulders and I think what we said yesterday was, the fellas we were a year ago, we’d like to be the same fellas in a year’s time. If we can be the same people we were a year ago in a year’s time, I think we’ll have done a very good job.”