Conor Murray on preseason, Joey Carbery and a unique influence on the Limerick senior hurlers 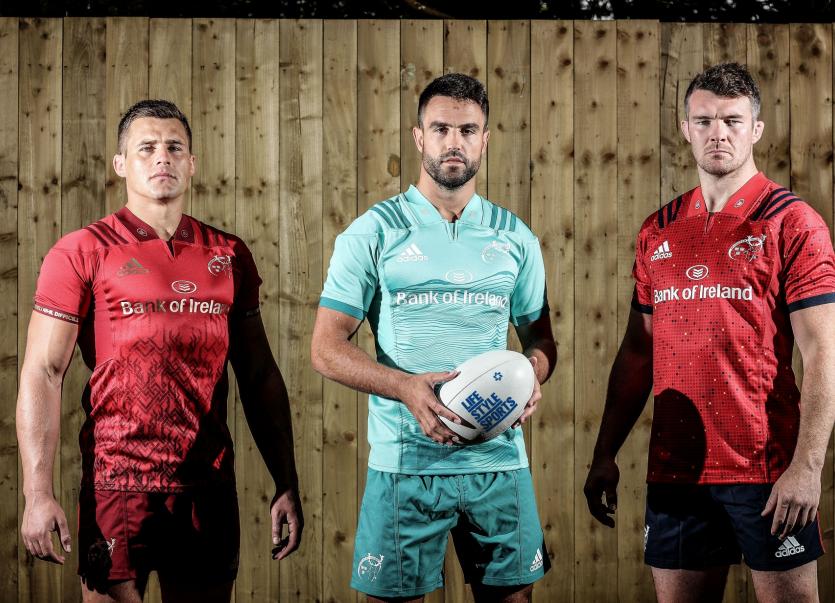 Conor Murray, Peter O’Mahony and CJ Stander were pictured at the launch of the 2018/19 Munster Rugby alternate and European jersey

Five weeks off. Just the right amount, according to Conor Murray of Munster and Ireland.

"Yeah I find a big difference between four and five weeks. (After) Four you are rested and stuff and you have had your break. Five gives you that extra bit of time to be mentally fresh coming in. I have been in all week and just feel really excited and ready to go. If you had a shorter break you might come back in a little less motivated. But everyone is ready to go which is go."

Murray returned to Munster camp this Monday, following his holidays, but not before he had taken in Limerick's win over Cork at Croke Park.

"Hurling is one of the best sports in the World to watch. I played hurling as a youngster and some of the Patrickswell young fellas were playing last weekend, so it was great to go up and see them do well. Being around Croke Park on All Ireland semi final day is a pure Irish day and there is a great buzz about it. I am looking for tickets for the final too, if you have any. " joked the former Garryowen number 9.

Murray also revealed what he would say to the Limerick hurlers, should he be asked for advice ahead of their August 19 All Ireland final.

"I would be asking them how to get passed a semi final first" - he laughed. Before revealing that Limerick did have some influence from rugby, with Munster and Ireland's Keith Earls having met with the hurling panel ahead of their semi final win.

"I think Earlsy was out chatting to them actually. They have linked into that a little bit. I’d just chat about whatever questions they ask me and  how to prepare. Don’t try and do anything different, that is what go you there in the first place. These are cliché things, because that is what they are and because that is what works in those games. They look like a team that are completely comfortable. They look like a team that didn’t get bogged down by the occasion last week and that was the fear with Limerick going to Croke Park for years. They seem to have a grasp on that. Earlsy is doing a good job with that"

Murray, who has begun his own five week preseason, will not see action for the opening rounds of the season. Something he says he gets frustrated about, at times.

"When you come back to Munster and the lads are doing plays and going through game situations, playing full-on rugby and you're taken away to do extra conditioning. That naturally is a bit frustrating, but you're mature enough to know you need the six-week or whatever amount of time you need to get your body right and your fitness and everything up to scratch so you can get a good run. Last year was my first pre-season in a long time to get six proper weeks of conditioning and training. It helps you for the rest of the season. It's a bit frustrating to see lads going out training and you've to watch for a couple of weeks, but I'll be joining them pretty soon. So it's ok."

The Irish international will also have a new, yet familiar face, at 10 this season. Joey Carbery joins from Leinster, where he will be charged with leading the side in their gameplan and overall game management.

"I've trained with him an awful lot, played with him a bit, I think that'll hopefully help him settle in. The lads know how good he is, and can be, so there's a bit of a buzz around the place about him coming down, the lads know his potential so they'll help him as much as they can too. Joey's very confident in his own ability, he'll have no issues settling in or telling people what to do, I don't have any fears for him, he's settled into his role very well, being in this week is very important for him to get to know everyone and we're living down here for the week, so he'll take a few steps forward."

When asked if Carbery will be 'handed' the Munster 10 shirt by the incumbant, Murray has no doubts the New Zealand born Irish international will have to fight for his spot.

"All the other tens have their own motivation about what they want to do, and Keats has been there for a long time, JJ had a strong finish to the season and he'll be looking to continue that momentum. It's definitely not written down on the team sheet, those lads have an awful lot to play for, and you need that - a competitive squad, that's what's probably let us down - we didn't have the depth we need, that if someone takes a bang someone else can step in and do a really job. They'll be fighting it out."

Available exclusively from Life Style Sports, Conor Murray, Peter O’Mahony and CJ Stander were pictured at the launch of the 2018/19 Munster Rugby alternate and European jersey, to join the conversation and discover the design inspiration for the jerseys, follow @lifestylesportsrugby and #LIVEMUNSTER. The jerseys and supporter range are available in Life Style Sports stores nationwide and online with next day delivery from www.lifestylesports.com.