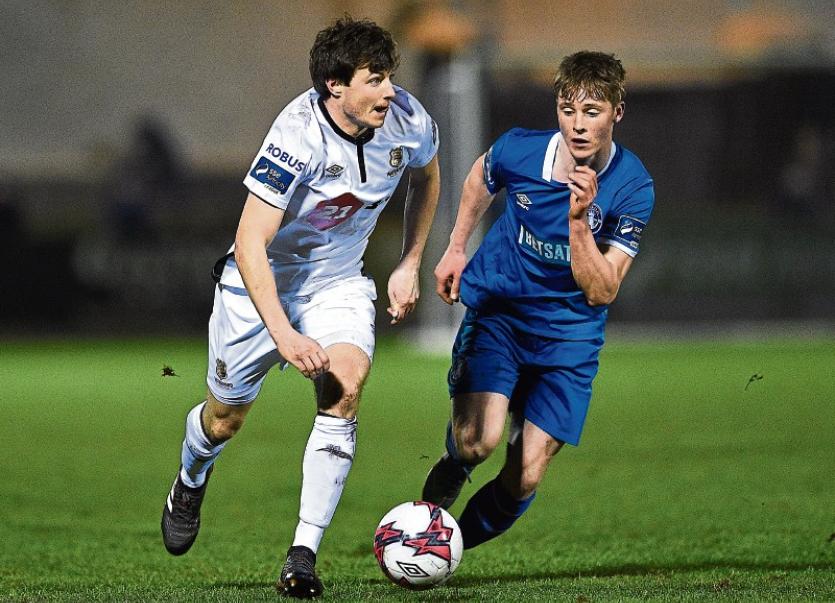 LIMERICK FC WELCOME Munster rivals Waterford FC to the Markets Field on Friday night as they aim to keep ahead of in-crisis Bray Wanderers at the foot of the SSE Airtricity League Premier Division table.

Both sides are coming off the back of damaging defeats in the league and will be looking to make amends. The ‘Blues’ took the lead in Inchicore last Friday thanks to a Billy Dennehy spot-kick before a second half brace from Conan Byrne handed the ‘Saints’ a late win.

Waterford fell to Shamrock Rovers by a goal to nil in their meeting on Sunday and the short turnaround will be seen as a positive by manager Alan Reynolds, as they aim to get back on track to securing European football next season.

The ‘Hoops’ are just four points behind them and with only the top three spots guaranteed to land you in a UEFA draw next season, the pressure is now on the recently-promoted side.

Home comforts have been anything but for the Blues this season. The only two games they’ve won during this campaign at the Markets Field were against the only side below them – Bray Wanderers – who have recently lost ex-manager Martin Russell as he stepped down from the post last week.

Speaking to the media after his side’s defeat in Dublin, Tommy Barrett highlighted the wage gap between the sides after he was forced to cut his budget mid-season.

“They’re in a different league to us financially, as most teams are at the moment. Pat’s can bring on the likes of Conan Byrne. We’ve a lot of 19s on the bench. Danny Morrissey, Shane Tracy and Shaun Kelly are experienced players, but did it help not having a game [last week]? I’m not so sure — at this time of year, you want a game every week.

“Obviously, we were flagging a bit towards the end, but if we had a couple of extra days training, they might have been a bit sharper, but in general, they’ve been really good.”

He continued: “We would have had one of the lower budgets as it was. We halved that again by releasing the higher earners. We hope that we can pay it. Pat and the board are trying their best to get some money in and get some investment. Hopefully, we can get bigger crowds in the Markets Field. We’re playing really well — obviously not getting the results, but we’re entertaining anyway.”

However, the last time the sides met, Tommy Barrett’s men ran out 6-3 winners – the first time the Blues have scored six away from home in the top tier for well over 30 years. Danny Morrissey looked a real threat that day, and is now fully fit again following the injury he picked up in this very fixture.

Waterford left with all three points in their previous clash at the Markets Field, when goals from Courtney Duffus and Paul Keegan sealed the points on that occasion.

Kick-off on Friday is 7.45pm, for a full match report see limerickleader.ie