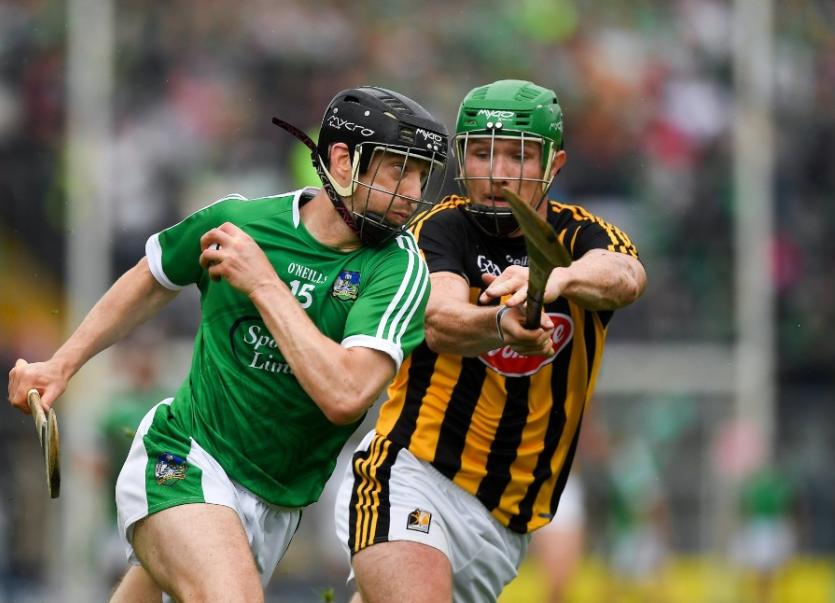 Graeme Mulcahy pushes past the challenge of Paul Murphy in Thurles

WHAT a display from Limerick in this 0-27 to 1-22 All Ireland senior hurling quarter final win over Kilkenny.

From start to finish this was a rip-roaring contest in Thurles with Limerick finding the last two points to book a Sunday July 29 semi final with Cork in Croke Park. Throw-in 3.30 and live on both RTE and Sky Sports.

Limerick were 0-15 to 0-12 ahead at half time with nine different scores. Kilkenny had nine wides in the half while Limerick had just three.

Brian Cody's Kilkenny made the early running but then Limerick powered into the contest after a few jittery early moments.

Watched by 18,596 in Semple Staidum, the sides were level on four occasions and it was the 27th minute when Limerick hit the front for the first time, 0-10 to 0-9.

It was a half when Kilkenny goalkeeper Eoin Murphy denied Aaron Gillane (12th minute) and Gearoid Hegarty (28th minute) - both shots for goal were saved over the bar. There was also a Limerick chance for goal in the 24th minute but a rampaging Seamus Flanagan couldn't find Gillane with the final pass.

One week after their replayed Leinster final defeat to Galway, Kilkenny raced from the blocks with three points from Richie Hogan leading the way. They were 0-4 to 0-1 ahead after 11-minutes with Flanagan getting the only early Limerick point in the fourth minute.

By the mid-point of the half it was 0-7 to 0-3 to Kilkenny, who showed five changes from the side that lost to Galway at the same venue seven days earlier.

Gillane and Kyle Hayes were the points to keep Limerick in touch until they roared into the contest with five of the next six scores between the 17th and 23rd minutes to level at 0-8 each.

The final 10-minutes saw Limerick find five points with three from the men in black and amber. Darragh O'Donovan with the final two from distance.

Limerick had to wait almost eight minutes for a second half score but Kilkenny one got one point back in this period.

Points from Hegarty, Hayes and Gillane then had the men in green 0-18 to 0-13 ahead after 11-minutes of the half. Like the first half, the Gillane effort was saved over by a fine Eoin Murphy save.

Back came The Cats with five of the next six scores - sub Richie Leahy with two.

Graeme Mulcahy did push the lead out to two points again but then another chance of goal went abegging when Flanagan couldn't get the power on his ground shot after a Hegarty solo through the middle.

Kilkenny did find a goal - six minutes from the end when Richie Hogan goaled to put his side 1-21 to 0-22 ahead.

But what a response from Limerick with Morrissey and subs Peter Casey and Shane Dowling pointing to edge Limerick back ahead 0-25 to 1-21 with four minutes to play.

Alas Kilkenny levelled the game for the sixth time with a fourth point for sub Riche Leahy.

Then up stepped Tom Morrissey and a late Gillane free to confirm an incredible win.