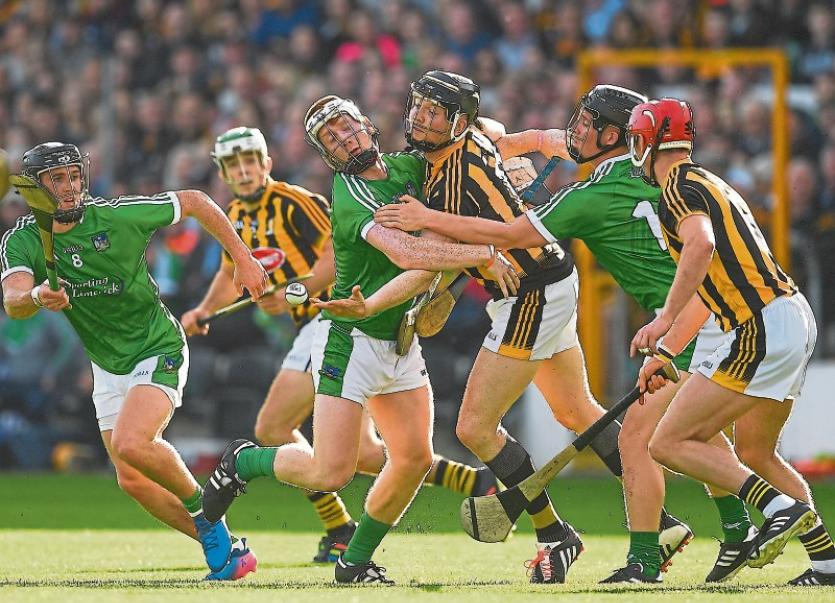 Action from last season's meeting between the two sides

ON December 9 last John Kiely stood in the middle of a boxing ring in the South Court Hotel and vowed: “we are going to leave no stone unturned over the next eight months”.

The Limerick hurling ‘Night of Boxing’ was a fund-raiser to kick-start their 2018 training fun.

This Tuesday night in the Gaelic Grounds, the Limerick hurling manager spoke ahead of Sunday’s All Ireland SHC quarter final with Kilkenny and he was just as confident in preparations.

“It’s our second time meeting them in 12-months so we know what to expect - it’s a case of going out and putting our best display forward and backing ourselves and I trust the players to do that. The players are prepared for this - we have prepared for the last eight months for this and to be ready for these games,” stressed Kiely.

“To be honest it’s not so much about the opposition or who they are or what stage of the competition it is in - it’s about ourselves. We have got to get our performance right - we have got to be as well prepared as possible and if our performance isn’t good enough then it doesn’t matter who we are playing, we won’t win.”

Since losing to Kilkenny in Nowlan Park last Summer, Limerick have played 15 competitive games (losing just twice), but Sunday in Thurles will be biggest of stages – a first quarter final since 2014 and against ‘Brian Cody’.

“We don’t rank it, we just take the games as they come and prepare the best we can to perform the best we can. Hopefully we can build on performances of the last couple of months and we have steadily improved all year long and we are again looking to improve from last week to this week and hopefully further on.”

He added: “It's a knockout quarter final and it's a case of making sure we deliver the best performance we can. It's an All Ireland quarter final, no bigger, no smaller” insists the manager.

“We wouldn’t be entirely happy with any one performance in total - there was good long periods of dominance in various games. There have been different aspects we wouldn’t be happy with but that's probably going to be always the case because you don’t get a perfect performance. There are always areas to learn from and to improve on.”

“I think both teams have improved from last year - Kilkenny are league champions and went to a Leinster final replay and the manner in which they came back last Sunday was super impressive so we know we have a huge challenge on our hands Sunday. Both teams have improved and it will be interesting to see who has improved the most,” outlined Kiely.

“I think all the (Limerick) players are a bit more mature and they have the benefit of two years coaching and two years physical development - a lot of the lads just have a bit more experience under their belts. Plus they have got more game time - we had a good run in the league this year and those extra game against better opposition were a big help to the team and I think the round robin series in Munster has been a huge benefit as well and you can see that with Kilkenny too with their young players benefiting.”

He continued: “We have moved up along in terms of performance and that’s clearly evident - we won no championship match last year and we won two this year. Even the performance against Cork, even though it was a draw, was very creditable with 14 men and we had lost Declan (Hannon) very early on. We have moved up a couple of levels in our performance but we know we still have to keep improving and look for higher levels of performance if we are to progress through the championship. We have seen what Kilkenny produced over the last two weeks and we know we have to match that and probably go beyond that to be in contention in the last 10-15 minutes of the game”.

The Limerick manager insisted that his side were concentrating more on themselves than the opposition.

“We are looking to get the best possible performance we can and put it out there and really go for it on Sunday - we know we have our hands full and it's going to be massive challenge but we are looking forward to it,” he said.

What of Kilkenny fatigue as they face into a third successive weekend of action?

“Look at last year’s championship and Kilkenny played us one week and went on to play Waterford next and that went to extra time and they put in a mighty battle. There won't be any leaning on any factor like that in terms of our mentality going into the game,” stressed Kiely.

Members of the Limerick management were in Croke Park for the drawn Leinster SHC final and in Thurles last Sunday when Kilkenny lost to Galway in the provincial decider replay.

“Galway were so awesome for the first 20-minutes in particular - in full flow it’s so difficult for any team to stop them but Kilkenny dug in and held on and held on and got a few goals to bring them back into it and showed great composure and calmness and you have to admire their ability to keep in and stay in games, even when everything is going against them,” said Kiely.

Limerick booked their spot in the quarter final with a 24-point win over Carlow.

“Obviously we weren’t happy with our performance against Clare and while we were happy with the performance in Carlow, that won’t be next or near enough to get us across the line on Sunday - we need to go up through a couple of gears again,” stressed the manager.