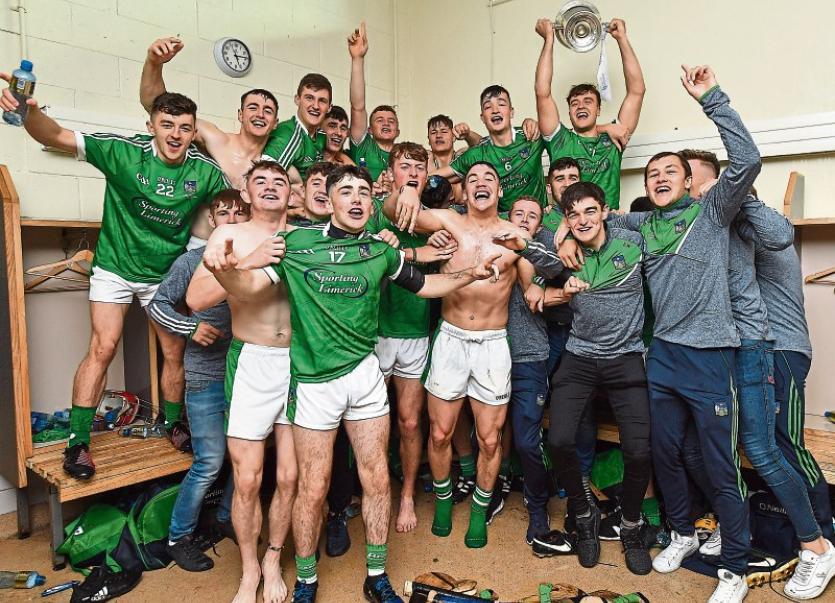 Limerick celebrate their U-21 All Ireland win last season

“THERE is no reason why Limerick can’t go on and be successful at senior level. The foundation is there. These are lads that will play with confidence,” said Pat Donnelly after Limerick lifted the All Ireland U-21 Cup last September.

Limerick have used 26 different in the five championship games this season – nine from Pat Donnelly’s successful U-21 panel.

The Limerick team to face Kilkenny will be named after training on Friday evening. There could be two changes to the side that beat Carlow by 24-points on Saturday with Sean Finn and Darragh O’Donovan in line to return. The duo played all games in the Munster SHC but didn’t start against Carlow – both had picked up slight injuries in the previous round defeat to Clare but were introduced as substitutes in Dr Cullen Park.

Limerick have a fully fit panel, part from the injured Paul Browne  and suspended  Tom Condon.

Sunday will be the third All Ireland quarter final between the counties. The last was in 2012 when two first-half goals from Henry Shefflin helped Kilkenny to a 4-16 to 1-16 win. Nickie Quaid, Richie McCarthy, Tom Condon, Shane Dowling, Declan Hannon and Graeme Mulcahy played in that game.

Ultimately, championship victory over Kilkenny for the first time since 1973 is the quest facing the Limerick senior hurlers this Sunday.

Limerick and Kilkenny meet in the All Ireland SHC quarter final in Thurles with Brian Cody’s side standing between John Kiely’s men and a July 28/29 Croke Park semi final with Galway or Cork.

Limerick could only play Cork, if Clare had beaten Wexford in their quarter final in Pairc Ui Chaoimh on Saturday (3pm).

Limerick and Kilkenny have met 12 times in championship hurling - the ‘Cats’ have won all six meetings since Limerick's last win in ‘73 All Ireland SHC final.

The sides met just over a year ago in an All Ireland SHC Qualifier in Nowlan Park – Limerick more than held their own but wides proved costly and the men in black and amber secured a 0-20 to 0-17 win.

Both sides are much changed though. Since that July 1 defeat in Nowlan Park, Limerick have played 15 games and management have seen their team evolve. Diarmaid Byrnes, Richie English, Tom Morrissey, Seamus Flanagan, Aaron Gillane and Graeme Mulcahy didn’t start last year and are all now regulars.

Kilkenny also have a new-look – with Enda Morrissey, James Maher, Richie Leahy, John Donnelly and Billy Ryan all fresh faces in their team that lost the Leinster final replay to Galway last Sunday.

The quarter final tie will have a 2pm throw-in on Sunday and will be live on RTE One television from Semple Stadium. The curtain-raiser in Thurles will be the All Ireland MHC quarter final tie between Galway and Kilkenny at 12noon.

Tickets for Thurles are available to purchase online at gaa.tickets.ie and from Centra and SuperValu outlets.

Only the Killinan End terrace (€25) is open.