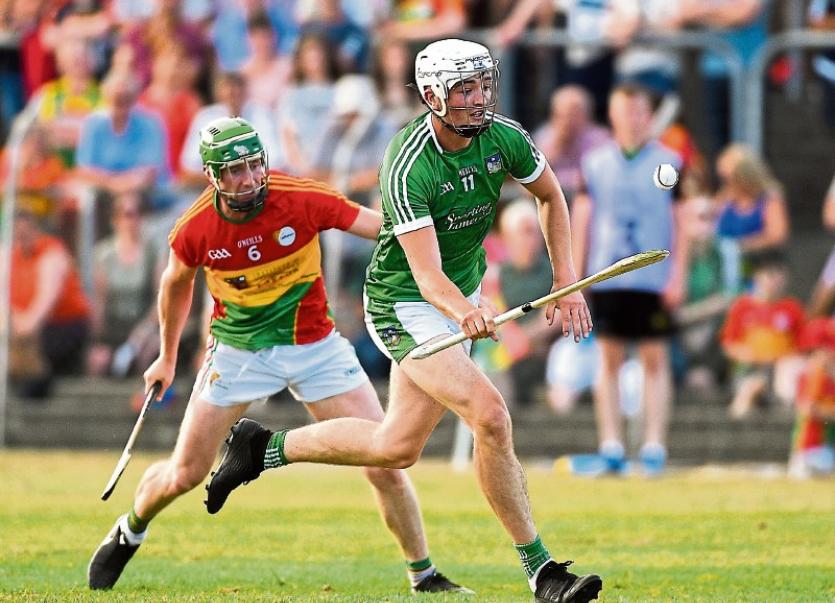 Kyle Hayes in action for Limerick against Carlow

By any standards this year has seen progress made by the Limerick senior hurlers. Promotion in the league and some really solid performances in the Munster championship have provided some new hope.

Carlow were never going to provide a true test for Limerick and they now face Kilkenny in what is a massive game for this team and for Limerick hurling overall.

There is a lot at stake next Sunday and defeat would halt development, but it would also make the task of making a breakthrough all the harder.

Our window for success will be short lived, that has always been the way for teams like Limerick and the importance of this encounter cannot be overstated.

Kilkenny come off the back of defeat to a very impressive Galway team in the replay of the Leinster championship last Sunday. Galway showed why they are All Ireland champions but Kilkenny refused to lie down. I don’t expect anything else other from a team managed by Brian Cody but how they manage playing a third high intensity game in three weeks could be his biggest test.

From a Limerick point of view they will be fresh and that could prove vital in the last quarter but it will take a bit more than freshness to beat Kilkenny.

This Sunday's game will be a real test of Kilkenny’s stamina to face into another major championship game. The intense heat of the previous two weekends has to have taken some toll on Kilkenny. The opening twenty minutes from Galway last Sunday was crucial, they set the tone, they set the pace and Kilkenny never got level with them.

Limerick will have to do the same. They will really have to go beyond safe limits to get over Kilkenny. They will have to set a burning pace in the opening twenty minutes and then we will see the effects of the previous weeks on Kilkenny.

The trip to Carlow was beneficial for Limerick in that it was a run out and it will stand to them against Kilkenny. It also showed that some of the subs struggled when introduced and the management will be very aware of that. Limerick blew Carlow away but for a ten minute spell in the opening half they were sloppy. They got away with that against Carlow but teams like Kilkenny will hurt you.

One of the key ingredients to win big championship games is work rate and unless you express lots of it against Kilkenny you have little chance of winning.

We have seen the levels Galway have brought to the table in the last couple of years and in Thurles last Sunday they showed a relentless appetite go at Kilkenny right to the final whistle.

In Munster championship games Limerick showed spells of massive work rate, particularly against Cork and Tipperary. They will have to do the same and a great deal more to defeat Kilkenny. They are not the team they once were but pride in the jersey and a great hunger to win is part and parcel of their DNA.

Despite struggling for long spells in the game against Galway they still found a way to grab a couple of telling goals and still ask major questions of the ‘Tribesmen’. Limerick will need to ask a lot of questions of Kilkenny. They will need to produce a really big performance to overcome them. I have seen Brian Cody operate for all of his rein as Kilkenny manager, I have studied him from close range on the sideline and be assured he started thinking about Limerick last Sunday evening.

Limerick have to deliver their best performance of the year to get a result next Sunday. This game will test them in many ways both on the field and on the line. Limerick will have to get a lot of things right but I think they are well capable of producing a big performance. Kilkenny don’t have the scoring power they once had and are struggling to find their rhythm of scoring from play. They are depending hugely on TJ Reid to keep them in games.

Limerick’s record over Kilkenny is pretty miserable in the championship but you would have to think that they have a great opportunity next Sunday. In beating Tipperary, Waterford and drawing with Cork we saw signs of great progress. The Clare defeat has presented questions but as a unit they have had time to deal with the fallout. They didn’t perform, they looked shapeless and never really came to the table. I don’t expect that to happen against Kilkenny. It would be a serious blow to Limerick if they fail to get one over Kilkenny next Sunday. The last couple of weeks will have taken a lot out of Kilkenny and Limerick need to avail of such an opportunity. It will require a massive effort to break down a Kilkenny team that are well capable of lifting their game. Cody will respect Limerick but deep down he will believe that if they get on top of Limerick they can win.

Picking the team is not as difficult as it was and only a couple of places are up for grabs. It will be really interesting to see what the full backline will be. Will the management go with Richie McCarthy at full back? If that is the case who will make up the corners?

Richie English, Sean Finn and Mike Casey are in line but one of them may loose out if McCarthy is started.

At the other end of the field we have a number of players for corner forward. My guess is that John Kiely will go with Gillane, Flanagan and Mulcahy. Peter Casey looked sharp against Carlow when introduced but he is lacking game time. There has been a lot of chopping and changing on the subs bench for the last few games and I am not so sure that builds confidence.

Is there any point having thirty six players on a panel now given the new championship structure. It’s hard to keep players happy but the more you have the more difficult it is. There is also the extra cost associated with this.

We can expect Brian Cody to freshen up his team on Sunday. I was only a few metres from Walter Walsh when he came off injured and I will be surprised if he plays.

Colin Fennelly and Richie Hogan should start and that will provide fresh energy to the forward line. Both came on last Sunday and both scored goals. The Limerick backs will have a huge part to play in the game. If they come to terms with the Kilkenny attack then Limerick have a superb chance of winning.

I think Colin Fennelly will start at full forward. He has brilliant pace and knows how to score goals. Limerick played a lot of short passing against Carlow, it broke down many times but if that happens against Kilkenny they will be severely punished.

The championship door will firmly shut for the losing team in Thurles next Sunday. It would be a serious blow to Limerick if they are gone out of the championship on July 15.

Limerick can look at stats and much more this week they can make plans but unless they go to Thurles to battle like never before they will find it hard to beat Kilkenny.

If we look at the form, attitude and honesty against Cork in particular then I feel they have a great chance of making the last four of the hurling championship.