'We must be better at home' - Limerick FC's Tommy Barrett 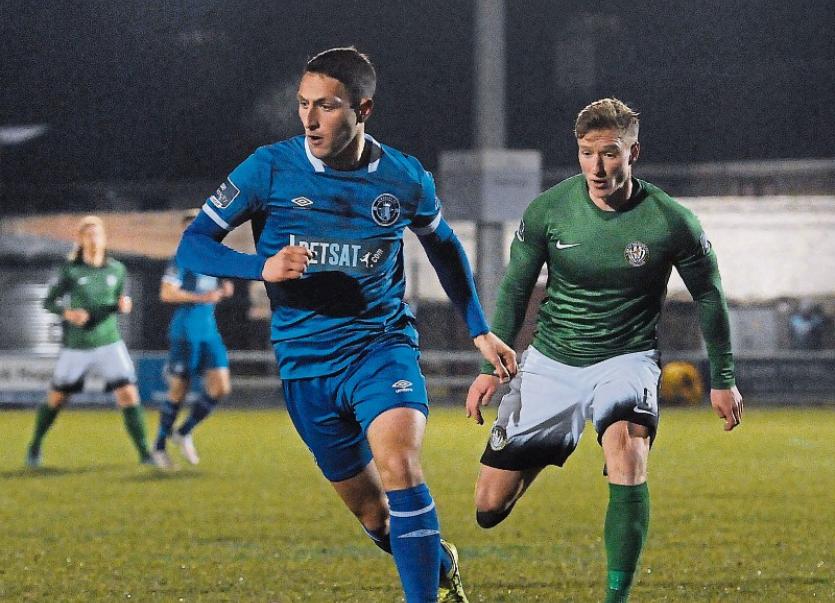 Shane Duggan, Limerick FC, in action against Paul O' Conor, Bray Wanderers when the sides met at the Markets Field in March. they meet again on Friday night

SMARTING Limerick FC face their final outing before the summer transfer window opens when basement side Bray Wanderers visit the Markets Field for a crucial relegation battle on Friday, 7.45pm.

Friday night’s game could well to be a final outing in a Blue jersey for several experienced Limerick players who look set to leave the club.

With the club set to indulge in cost-cutting as a result of a significant fall-off in revenue this season, it now seems likely that a number of players will be on their way out the door.

Speculation this week suggested that Mark O’Sullivan and New Zealand international Henry Cameron have already played their last games for the Blues.

Limerick may also opt to go part-time for the remaining months of the League of Ireland season in order to cut costs.

Second-from-bottom Limerick have 13 games remaining in which to secure their Premier Division status for 2019.

Limerick occupy the relegation play-off position in the table, six points clear of basement side Bray who sit in the automatic relegation position with just over a third of the season to run.

Victory for Limerick on Friday night would give them a nine-point cushion over the side from the Carlisle Grounds. However, defeat would reduce the gap between the two sides to just three points.

Limerick are three points adrift of eighth-place Bohemians who are safe from relegation right now.

Limerick had a useful work-out against local junior side Janesboro on Tuesday night ahead of the resumption of the Premier Division.

Limerick have managed to win just four of their 23 Premier Division fixtures this season. With six draws to their credit, the ‘Blues’ have also lost 13 times.

Asked about the prospect of several experienced squad members opting to leave, Limerick FC manager Tommy Barrett insisted: “We won't know who is going to move on until after Friday night. At this stage, I'm not sure who will be leaving.

“Friday’s game with Bray is hugely important. Bohs are also only three points ahead of us. if we win we can draw level on points with them, if we lose we are drawn back in a bit. But we can only look forward and hopefully get the result.

“Obviously we will be going for the win against Bray on Friday, but it is important that we do not lose because it keeps that six-point gap.

“At the end of day the whole team has to defend better. When you are not scoring goals you don't concede, we have to stop conceding silly goals.”

Following the Bray game, Limerick face a trip to the Brandywell to take on Derry City on July 6.