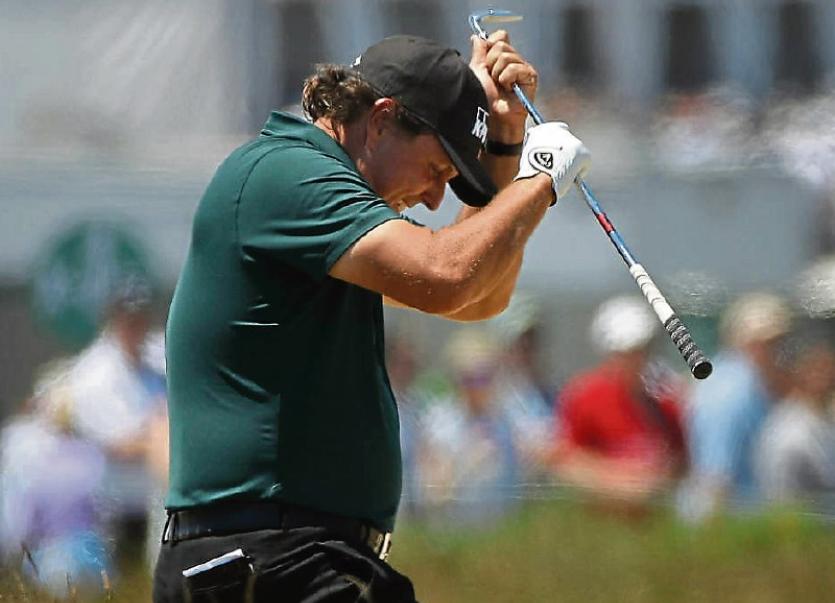 THE U.S. Open is always such a grumpy and controversial event that it, more often than not, puts me in a bad mood.

It depends upon one's point of view but Tom Weiskopf got it right when he said: When people say that they dream of playing in the U.S. Open someday, what they really mean is, they'd like to be good enough to play in it. Trust me, the U.S. Open is not fun.

I keep reminding myself that the USGA are the very same people who have allowed equipment and the ball to get out of control and, in my opinion, that is at the heart of everything that is wrong with the game, let alone the US Open.

Trying to be too clever in order to manipulate the winning score instead of keeping it simple is actually stupid, in my opinion.

What's wrong with setting the course up hard and allowing people to shoot under par if they are able? At Shinnecock Hills, the line between a great shot and a disastrous one was too thin until the USGA was forced to water the greens heavily to slow them down and put easier and more accessible pin positions into play for the final round on Sunday.

I know that the US Open is intended to be a searching mental as well a tactical, skills test but the way Shinnecock Hills was set up the punishments the golfers suffered for the 'misses' were too severe. Because of the windy conditions and the crusty, 'too fast' greens on the first three days, shots that were literally inches away from being brilliant were ending up in serious trouble, far too often.

I like tough golf with deep swales and shaved run offs around the greens but Shinnecock's were too steep and vertical.

It rattles my confidence in the powers that be that their method of combatting science and technology is to turn golf into a lottery. The US Open should be a showcase of the best that golf has to offer but it is more like a horror movie and does nothing to attract people into the game.

In the circumstances, one could only admire the self-control shown by the top finishers, especially Dustin Johnson who showed admirable restraint and wisdom by not trying to exploit his length advantage to any noticeable degree.

He played as controlled a game of golf as the bouncy conditions would allow and only for his putting deserting him at the weekend, would have won by a country mile.

And, this from a player who is often derided by me and others as not having a brain in his head? DJ is the World's No. 1 for lots of reasons and he demonstrated them at Shinnecock Hills.

The performance of the winner, Bruce Koepka, in winning back-to-back US Opens on two completely different styles of golf courses and playing conditions marks him out as an exceptional talent who will 'go down in history.'

There are more big wins in this tough Florida boy, who, it will be remembered learned his trade in Europe, first on the Challenge Tour and then on the European Tour, where he developed many long-lasting friendships.

As for Tommy Fleetwood, his position as Europe's No. 1 has been copper-fastened as Rory McIlroy's position continues to crumble underneath him. Once again, McIlroy was badly lacking in the mental stakes. He should be honest with himself. Shinnecock's wide fairways suited Rory but he missed them far too often.

Only five greens and seven fairways 'hit' in regulation in Round 1 is 10-handicap standard (which is what he shot) For Rory to say that he was unprepared for the strong winds was not much of an excuse.

He better be ready to play in windy conditions in the Irish Open at Ballyliffin in a couple of weeks, and also at Carnoustie in The Open, third week in July.

As for Phil Mickelson's antics on Saturday, I have never seen anything like it! He should have been DQ'd on the spot. To boast afterwards that he broke a rule on purpose in order to 'potentially' save strokes is not within the spirit of an honourable game. There is big difference between using the rules to your advantage and taking advantage of them.

However, I'm convinced it was 'spur of the moment' and forgivable. If Phil really did think about it in advance (as he said he did) it is a completely different, extremely serious scenario.

He cannot have realised he broke one of golf's most sacrosanct rules (No. 1-2), which (paraphrased) is: - a player must not take any action with the intent of influencing the movement of a ball in play. In the case of a serious breach of Rule 1-2, the Committee may impose a penalty of disqualification when it is considered that the action taken allowed him to gain a significant advantage or placed another player at a significant disadvantage.

Not for the first time, the USGA 'funked' taking proper action on its own rules. They had suffered enough bad publicity is my guess.

What is the cry we hear today -- this or that is unfair! A golfer comes in from a round, and some bunker or green has spoiled his score, and he proceeds to damn the course and the whole world? And because he approaches golf selfishly, with an exaggerated ego - Max Behr