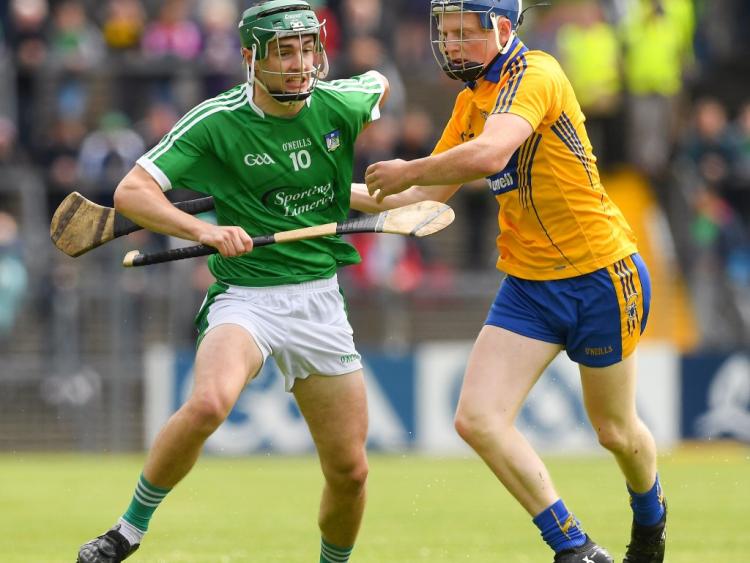 Danny O'Leary attempts to break past the Clare defence

LIMERICK are in the Munster MHC final after a sensational finish saw them secure a dramatic 1-21 to 2-17 win over Clare in Cusack Park, Ennis.

Antoin Power’s side scored four of the last five points to secure a spot in the July 1 decider against Tipperary.

Limerick started slowly and were 0-3 to no score down after seven minutes – three Kealan Guyler points giving the Banner a dream start.

Mark Rodgers added a fine effort as Limerick struggled with the pace of the Clare play. Limerick finally got on the board after a dozen minutes.

Bruff’s Danny O’Leary, making his first start of the campaign, hit a good score before Bob Purcell stormed through the defence to double Limerick’s tally.

Purcell had a personal tally of 0-6 in a sensational display of shooting from the Doon man.

This was the start of a run of five Limerick points in a row – Colin Coughlan and Cathal O’Neill adding white flags before Purcell levelled the game with a fine strike from distance.

The teams them swapped scores before Limerick were saved by some heroic defending. Shane Meehan’s low effort had beaten the ‘keeper but was blocked incredibly by full-back Ben Herlihy.

With the game in the balance, Clare struck the game’s first major on the stroke of half time.

Good work from Robin Mounsey and William Halpin set up Rodgers who made no mistake with the finish.

However, back came Limerick and within 60 seconds, Cormac Ryan had the ball in the net at the other end.

Limerick flew out of the blocks in the second half, scoring three of the first four points within three minutes of the restart. Bob Purcell and Danny O’Leary were doing the most of the damage but it was Barry O’Connor who shot Power’s men into a 1-10 to 1-9 lead.

However, the lead was short lived as Clare then struck their second three-pointer. Once again, it was Rodgers who supplied the finish, this time it was Shane Meehan with the assist.

Robin Mounsey kept Clare’s noses in front however, Limerick were able to stay within touching distance and when O’Neill hit his third point, the away side trailed by just one, 2-12 to 1-14, heading into the final quarter.

Clare pushed this advantage to three points, courtesy of Conor Hegarty as Clare looked in control with seven minutes remaining.

However, Limerick kept fighting and points and scores from Diarmuid Hegarty and an O’Neill ’65 reduced the deficit back to the minimum before Purcell’s sixth from play levelled the game after 55 minutes.

In a hectic finish Guyler edged Clare ahead before Mounsey doubled the lead with a super effort with time all but up.

However, Limerick came flying at Clare and a pair of O’Neill scores plus a superb Emmet McEvoy score edged them ahead before Conor Hegarty drew parity once again deep into injury time.

But up stepped Cathal O’Neill as he has done throughout the last four weeks and hled his nerve to slot over a ’65 to win the game and send Limerick to the final.