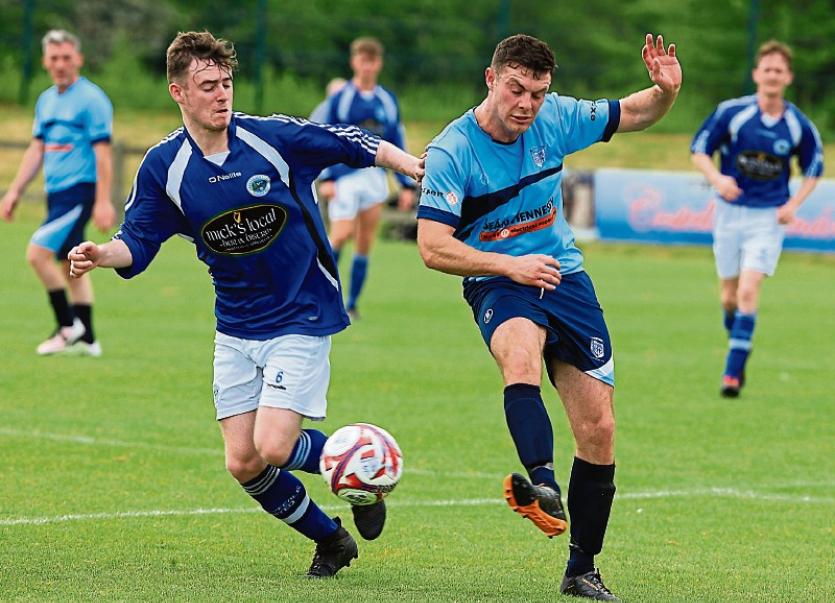 Rathkeale's Jack Hennessy in a tussle with Abbeyfeale's Thomas Sexton

The Premier Division League title race will go to a play-off in Clounreask this Friday night at 7.30 after Abbeyfeale United and Rathkeale both won their last two games of the regulation campaign at the weekend, finishing the season deadlocked on 45 points.

Both had easy 6-0 home wins on Friday night. Barry Sheehy scored four goals for Abbeyfeale against Shannonside, with the other two coming from Darren Keane and Tom Sexton. Pa Ahern was Rathkeale’s four-goal hero against Carrig Celtic and their other scorers were Jack Hennessy and Mark O’Sullivan.

On Sunday morning, Abbeyfeale and Rathkeale knew that their task would be much more difficult when they travelled to Glin Rovers and Newcastle West Rovers, respectively. The title would be won on the day if one team bettered the other’s result and so the League trophy was in one venue and a substitute trophy in the other venue, ready to be presented if required.

It was obvious from the outset that the opposition in both cases were determined to present a formidable challenge, both sending out strong teams. In Glin, the home team had a great chance to open the scoring in the 20th minute but James Wallace fired over from a cross by his twin brother John. In the 35th minute, Abbeyfeale took the lead in the match and in the title race when, after two contested headers from Billy Quirke’s kickout, the ball broke to the in-form Sheehy, who drilled a half-volley unerringly into the bottom left-hand corner.

The teams were deadlocked in the title race again early in the second-half when Rathkeale benefited from an own goal. The games in both venues were now on a knife-edge. That’s how it remained right up until the final whistle in Glin, where Abbeyfeale held out for their 1-0 victory, helped in no small part by an immense performance from Cormac Roche at centre-half. Rathkeale were able to relax a little at the end when Gary Enright, scorer of the winner in the Desmond Cup Final, made it 2-0 with a late goal. Before that, Tom O’Callaghan had hit the post for Rovers when the score was 1-0 and so the overriding emotion for Rathkeale at the final whistle was relief as they had been pushed all the way by a team that brought an honourable curtain down on Rovers’ last day as the club that had been founded 1987 as they will amalgamate with Newcastle West as Newcastle West Town for next season.

The other two Premier games played at the weekend brought 2-0 wins on Friday night for Glin Rovers and Broadford United, away to Ballingarry and Granagh United respectively. The scorers for Glin were brothers Tommy and Tadhg Culhane, while the Broadford goals were scored by Alan Fitzpatrick and Jamie Keane.

Getting back to the title race, Friday’s play-off should draw a huge crowd. Those who saw the Desmond Cup Final between the two sides last Sunday week will want a second helping, while many others will also want to witness the second instalment of this triple-header, with the sides meeting again in the League Cup Final on Friday week.

The League Cup is a big prize, the Desmond Cup is even bigger but the biggest domestic prize of them all is the Premier Division League title. Rathkeale were deserving winners in the Desmond Cup Final and so have to be slight favourites going into this game. There was concern in the camp when influential midfielder, Mikey Lyons, was injured last Sunday against Newcastle West Rovers but managers Alan Doyle and Seamus Giltenane are more hopeful now that he will be fit to play Friday. The winning of the midfield battle by Lyons, Keith Harnett and man of the match, Gary Enright, was a key component of Rathkeale’s victory in the Desmond Cup Final.

Abbeyfeale manager John Kelliher and his assistant, Tony Stout, will have to try get more from midfield that they did in the Desmond Cup Final. An obvious solution is to put Chris Smith in there and it will be a surprise if that doesn’t happen, especially after his outstanding performance in the centre of the park in the first-half against Glin last Sunday.

As for the likely outcome, another tight game is envisaged and the destination of the League title may well come down to a penalty shoot-out. I will plump for an Abbeyfeale victory on the basis that I expect an improvement from the whole side and that the expected presence of Smith in midfield will ensure at least parity in this key area.