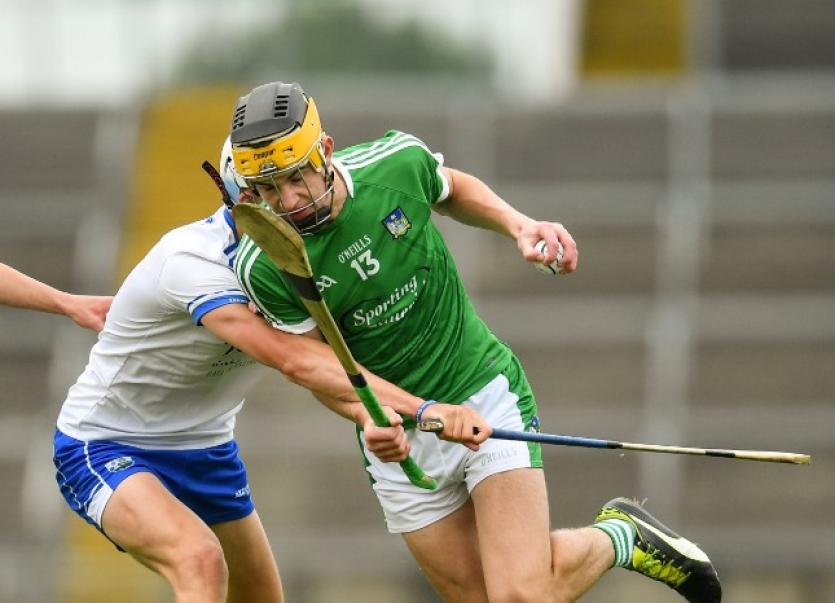 Colin Cloughlan attempts to break past the Waterford defence

THE Limerick minor hurlers suffered their first defeat of the 2018 Championship after coming unstuck against a classy Waterford outfit, losing 2-17 to 1-13 at the Gaelic Grounds on Sunday lunchtime.

It was two goals in injury time which saw Limerick come unstuck against an impressive Deise outfit.

After wins against Tipperary and Cork in their last two outings, three games in four weeks proved too much a task for Antoin Power’s young side who didn’t have the same energy shown in Pairc Ui Chaoimh.

Limerick started slowly and only got on the board after eight minutes when Cathal O’Neill hit over his first free. This was after two placed balls had Waterford in front early on.

Patrick Kirby, who impressed against Cork, got the first score from play to level proceedings.

Waterford played much the better hurling in the first quarter and, thanks to scores from Oisin O’Ceallaigh and Christopher Kavanagh, were 0-5 to 0-3 ahead after 15 minutes.

Waterford’s tails were up and this was emphasised when Caolan MacCraith scored a super point, direct from a sideline cut. The An Rinn clubman doubled his personal tally with a fine point from play two minutes later to put the Deise 0-8 to 0-3.

Limerick got three of the next four points approaching the interval, with Kirby, Bob Purcell and Ballybrown’s Barry O’Connor hitting much-needed scores, but Power’s men trailed 0-10 to 0-7 at the change of ends.

Limerick continued to struggle in the third quarter and while O’Connor and Purcell both scored, the visitors added three points in the first 10 minutes of the half to go 0-13 to 0-9 in front.

However, Limerick upped the workrate and were rewarded with a 43rd minute goal. Good work from Bryan Nix set up O’Neill and the Crecora man blasted home to reduce the deficit to just one.

After a few anxious minutes from both sides, Purcell levelled the game with his third white flag, making it 0-13 to 1-10 with 10 to play.

However, back fought the visitors, and the Gary Morahan managed side hit two scores in 60 seconds to push ahead.

However, Limerick kept plugging away and through Michael Martin and an O’Neill free were back at parity with time running out.

Caolan MacCraith hit his fourth from play to edge the Deise ahead before a dramatic O’Neill point from a tight angle looked to seal a draw.

However, with 62 minutes on the clock, James Power hit a super effort to put ahead.

The Deise then scored two late, late goals, through David Byrne and Gavin Corbett, as a Limerick side who ran out of legs, will have to avoid defeat against Clare in Ennis to secure a Munster final berth.