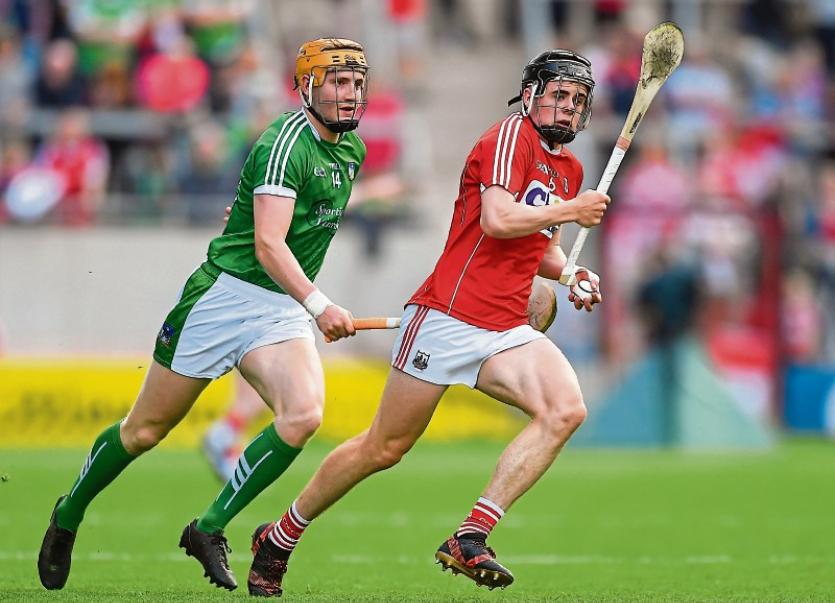 Battle on the Lee: Darragh Fitzgibbon of Cork in action against Séamus Flanagan of Limerick during the Munster GAA Hurling Senior Championship Round 3 match at Pairc Ui Chaoimh

As the final whistle sounded the supporters were left gasping for air. It wasn’t just their lungs that were hurting it was because their heart rate had extended well beyond safe levels.

This was a drama filled, action packed Munster championship encounter and while Cork played a role it was really Limerick that set the hurling year alight.

Raw courage, passion and massive heart are just some of the words that could be used to describe the bravery shown by Limerick but I am not sure if words alone could do justice to the performance of this young Limerick team. It was all that we could have hoped for. It’s what we have longed for and finally it’s fair to say we now have a team capable of going into battle.

Unlike previous years, there were no sideshows on the line or on the field. What we now have is a very honest bunch of players and a management team doing a lot of things right. Home advantage in these games is proving very important but you wouldn’t have known that as Limerick made light of the surroundings and just got on with hurling. It was Limerick that set the tone, they dipped but that always happens teams at this level but over all Limerick did most of the good hurling.

The biggest crowd of the season turned up for this game. They weren’t disappointed. Conditions were super and both teams dished up a classic. This game reminded me of many great days of the past. We have waited a long time to see the sort of performance we witnessed in this game. The most telling aspect of Limerick play was that as a group they worked really hard.

I studied the Limerick warm up, they looked really good. I noticed that Declan Hannon was not moving that well when it finished. At 6.52 Dr. James Ryan took his pulse but while looking concerned it was decided Hannon would play. Only minutes into the game Declan Hannon had to come off and I hope he is recovering well and will see lots more action soon.

To make matters worse Aaron Gillane got a straight red card after twenty five minutes. This was a blow and Limerick trailed by two points at the time. It was a lack of experience that saw Gillane strike out with the hurley on Sean O’Donoghue. Indeed O’Donoghue is no angel and was lucky not to follow Gillane later.

Everything pointed to Cork at this stage. Two points up and a man to the good. The Limerick defence worked themselves to the bone, Dan Morrissey went centre back and did well. Diarmuid Brynes is growing with every game and his hurling style has changed to play a smarter ball to the forwards. William O'Donoghue came in at wing back. This is not his position and he never really settled there.

The inside line of Finn, Casey and English were busy. They had a lot of work to tidy and while at times they gave away the odd easy free they played very well. This unit will develop even more. They will have gained great confidence from this win. Finn made some vital hooks and blocks.

The attitude that Limerick showed was marvellous. They showed great maturity in the way they battled with Cork. Try as Cork did, they never really got the better of Limerick. This was a battle and Limerick won battles all over the field.

With Gillane gone off it fell to Tom Morrissey to take over frees. He was fantastic. He worked hard, hit difficult frees and used his powerful frame when it was needed. Limerick sucked up a lot in the opening half but despite Corks numerical advantage Limerick were only two points down at half time. The sides were level four times in the opening twenty minutes but Limerick failed to score for a ten minute spell between the 19th and 29th minutes.

When Limerick needed leaders it was Graeme Mulcahy that came to the fore. It was one of the best games I have ever seen him play. He showed how one man can influence a team. He showed the way and the rest of his team mates followed. Limerick made some mistakes in the opening half, they lost ball easily and some of the puck outs put them under pressure. When the half time whistle sounded it was Limerick that showed the greater fire leaving the field. That fire was evident in the opening minutes of the second half as the sides were level at 0-15 each after forty one minutes. Tom Morrissey, Cian Lynch and Darragh O’Donovan landed fine scores.

When Pat Horgan scored a goal for Cork on the 44th minute it looked like Cork had got a telling score. Horgan flashed home a good goal after Seamus Harnedy delivered the pass. We didn’t know it then but it was Limerick that took control of the game from this point on. In the space of five minutes Limerick had the new stadium rocking. Tom Morrissey hit two great points while the inspirational Seamus Flanagan took the Cork full backline apart. Flanagan was in sparkling form and I am sure his scores were hugely uplifting for the team. With every ball he hit I thought of his mother Ann who like many other mothers gave great dedication to her son at underage level.

Limerick had the edge on Cork now, they ran at them and forced them into mistakes. Cork were finding scores hard to come by and only scored one point in a ten minute spell. From that Cork goal Limerick outscored Cork 0-9 to 0-3. It showed the control Limerick had on the game and work rate of every player. Donovan and Lynch were hurling well at midfield while Gearoid Hegarty did an amount of good work. Hegarty was a doubt all week with an ankle injury but like many times before the St Patricks man just got on with his business. Cork had the extra man but it wasn’t having an impact on the game. Mark Coleman was the man charged with the role. He is a player of pace and skill but he forgot his primary duty and left huge gaps which Limerick took advantage of.

The fighting spirit of Limerick was a joy to watch. Regular readers will know how I have often said in the past how players must go beyond their comfort zone to achieve at the highest levels. I am seeing signs that this present bunch of Limerick players have now entered that space.

It was Cork that struggled to stay in the game at the end. Limerick played like men possessed. They played with the sort of heart Limerick teams of old were famous for. Pat Ryan had a great chance to convert a goal but hit the ground with only four minutes of normal time remaining. At that stage Limerick were ahead by one. In a nail biting finish the teams exchanged points but it fell to Kildimo Pallaskenry player Kyle Hayes to score the equaliser. Hayes showed a lot of quality to convert the score under pressure.

This was a special evening for hurling but more importantly it was a special evening for Limerick hurling. The team gave an outstanding display and will have learned a lot from it. They can improve further, Barry Nash was flying in training and it was a surprise he didn’t make the panel last week. Will Declan Hannon be fit to play? If he is out it will be interesting to see what changes the management will make.

Waterford will bring a huge challenge to Limerick next Sunday and to me this game will be hard won. What we saw from Waterford last Sunday was a team that are back on the road despite missing many top players. The outcome of this game will be really important. Limerick have won back respect, they have won back supporters and I salute the players and management for that.