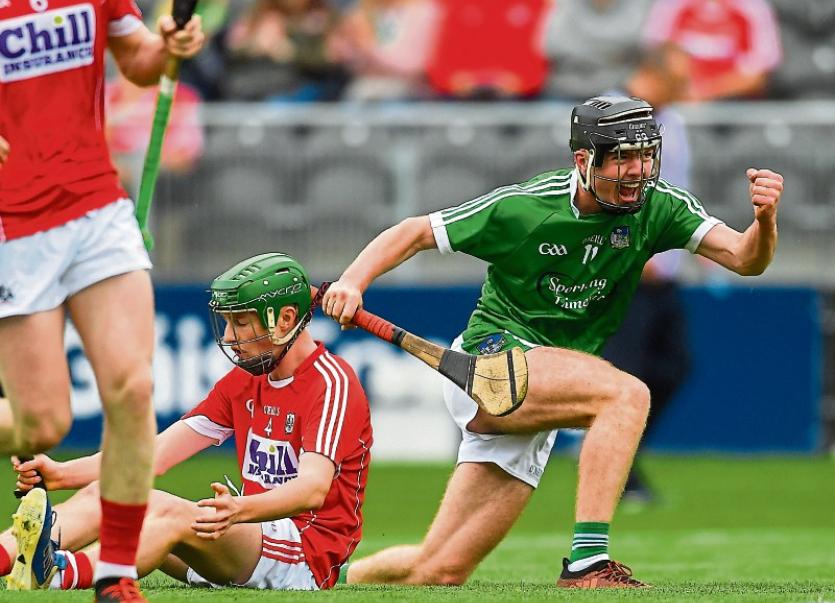 LIMERICK made it two wins from two in the Munster MHC after a six-point win over Cork in Pairc Ui Chaoimh on Saturday evening, coming out 1-20 to 0-17 winners

After an impressive showing against Tipperary 13 days earlier, the visitors backed up that performance with this superb display Leeside to sit pretty on four points in the group.

Once again, Cathal O’Neill was scorer in chief but it was Doon’s Cormac Ryan who scored the crucial goal for the Treaty.

In the only change to the side who beat the Premier in the Gaelic Grounds, Patrick Kirby, son of Limerick legend Gary was brought into the team and the Patrickswell youngster justified his inclusion with the first score from play to give Limerick a 0-2 to 0-1 lead early on.

After Cork levelled the game, Diarmuid Hegarty, another son of a Limerick star of the 90s, hit the visitors in front before Cathal O’Neill’s second free doubled the advantage.

After missing a few early frees, O’Neill found his range and hit a super placed ball from the sideline.

Limerick had the better of the opening exchanges and when Cormac Ryan finished a smart score, Antoin Power’s side led 0-6 to 0-3 at the quarter hour mark.

However, Cork took the upper hand after this and through Ethan Twomey and a Jack Cahalane free reduced the deficit to just one.

Cahalane was on form from placed balls scoring 0-4 in the first half.

But Limerick finished the half strongly and efforts from Kirby, Colin Coughlan and wing-back Eoin O’Mahony helped them to a 0-12 to 0-7 interval lead after they scored five points in a row before Cahalane’s fourth free reduced the gap to five on the short whistle.

O’Neill continued his scoring touch after the break hitting one from play and a ’65 in response to Cormac O’Brien’s opening point for Cork.

Power’s men took complete control mid-way through the half as Cormac Ryan hit a fantastic goal – the Doon man running through the Rebel defence and blasting the ball home to give Limerick a seven-point lead.

O’Neill added a free shortly after before a pair of Hegarty points but Limerick 1-17 to 0-10 ahead with 13 minutes left to play.

Cork kept fighting and through Padraig Power and O’Brien reduced the gap to six approaching the closing stages.

However, another O’Neill effort, bringing his tally to 0-11, and a second for O’Mahony ensured a deserved win the Limerick as they are looking good in this U-17 competition.