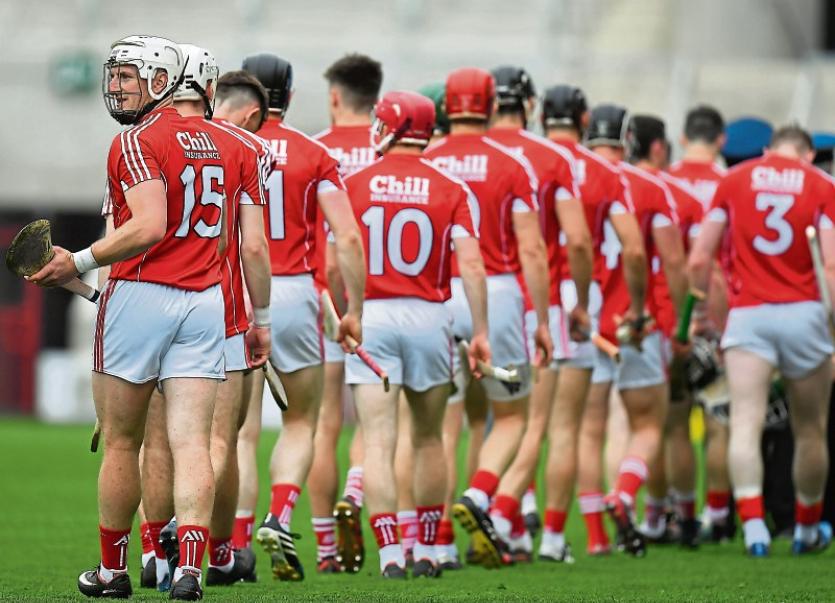 Patrick Horgan of Cork looks on during the pre-match parade ahead of his side's clash with Clare in round one. The Rebels will be a tough test for Limerick this Saturday night in Pairc Ui Chaoimh

The dust has barely settled from their win over Tipperary and now the Limerick senior hurlers face Cork this Saturday evening in Pairc Ui Chaoimh.

It’s a game Limerick are well capable of winning but I would suggest they will need to be a great deal more clinical than they were against Tipperary.

Cork play with a lot of pace and they will want to run at the Limerick backs and for that reason it will be very important that Limerick close down the space.

Anthony Nash will puck out with pin point accuracy and the level of success he enjoys could have a major impact on the game. To that end Limerick will have to be dominant and reduce the risk.

Players such as Harnedy, Horgan, Meade and Kingston have been very impressive for Cork so far and as a unit the Limerick backs will need to be very vigilant. I don’t expect too many changes in the Limerick team but I do expect to see Mike Casey start at full back. Casey was good when introduced against Tipperary, he has pace and attacks the ball. Such pace will be important against a Cork forward line that thrive on fast ball.

One of the good things to come out of the win over Tipperary was that Limerick won back some badly needed respect at national level. They won well but most of all they appeared to handle the outcome with maturity and the focus was very much on the next game. Winning that opening round was very important to Limerick. From the players and management point of view it will provide great confidence and I would expect to see them express themselves a bit more on Saturday evening. Limerick did a lot of things well against Tipperary but they also will have learned a lot from the mistakes made.

One aspect of Limerick's game that has haunted them during the league and also against Tipperary was the amount of poor wides they hit. This is one area that they will need to put right. Games at this level are won on small margins, hitting wides often come as result of pressure, lack of confidence or just taking the wrong option. Which ever is the case there is room for improvement in this area of their game.

Cork have been out on successive weekends and that could be to Limerick's advantage. If Limerick are in the game and forcing the pace with ten minutes to go then I feel we will have the legs on them.

Home advantage will be worth a few points to Cork and other than Dublin and Offaly all teams have won their home games. Cork build from the back and the stats show that Anthony Nash went short for a lot of his puck outs and he was rewarded with scores at the other end.

Limerick will have to push back for his puck outs and force him to go long. In the opening half against Tipperary we saw a Cork team full of running and taking scores at will. That was not the case in the second half because Tipperary were somewhat transformed. They worked really hard, they didn’t allow them time on the ball and Limerick will have to do the same. Cork will hurt you if you give them space and the Limerick management and players will be very mindful of this on Saturday evening. I am confident that Limerick will not fear Cork, they have the physical strength and ability to ask them many questions. The big task facing Cork this week is recovery and how they manage that may have a big outcome on the game.

Clare joint manager Gerry O’Connor said recently that “Ice baths and pool sessions” could decide the Munster championship and he may well have a point.

Players are not use to playing championship games consecutively and the big challenge for managers is to try and find a way to lift them week after week. One thing is for sure whoever finally wins this Munster championship will have earned the right to call themselves champions. The winners can rightly feel they have won the hardest championship in the history of this great championship.

Limerick will come into the game fresh and that will stand to them. They had some good workouts last week, there was even a bit of heat between some players and that to me is a good sign. Tying to make the starting fifteen is the fuel that is driving players now but with every week that passes the value of a strong panel is going to be crucial. Limerick have a strong panel and that will have a big impact on the outcome of this championship.

While Cork will wonder how they left a nine point lead slip they are the ones that have most to learn from it. They will know very well they fell asleep in the second half and that will be the part they will focus on this week. They won’t hit too many balls but they will spend time drilling players about how they stopped working and how Tipperary brushed them aside.

This championship is testing players and management and they are having to come to terms with a model that sees them play big games with little time to recover.

From John Kiely’s point of view he saw Cork up close last Sunday and he will have seen the importance of working hard against them.

Cork have players like Darragh Fitzgibbon, Mark Coleman and Daniel Kearney, these guys are really on form. Fitzgibbon is a first cousin of Richie English and I would expect Cian Lynch to mark him.

Cork have pace in key areas and how Limerick contain them will be very important. The Cork full forward line have done well, Horgan, Kingston and Meade have caused problems but I think Limerick can hold them if they opt to start Mike Casey at full back. Horgan has very good hands but Sean Finn has the quality to hold him. Yes Horgan will score frees but with close attention from Finn he will struggle.

Winning your own puck outs is vital and Limerick will need to match Cork in this area. Nicky Quaid will have a big part to play. We saw Nash last Sunday hit only three puck outs long in the first half but because of how Tipperary pushed up he was forced to go long in the second half. In total Cork won 76% of their own puck outs.

If Limerick get a win in Cork it will put them in a very strong position going into the remaining games. Following that they will play Waterford and the last game will be against Clare in Ennis.

There is pressure on Limerick going to Cork but this is a game I think they will win. I think Limerick have a stronger bench than Cork. The management made the right calls at the correct times against Tipperary and how they manage that will have a big impact on the game.

Limerick have kept a low profile since the Tipperary win and this is good. All too often in the past we saw players will lots to say. John Kiely has got this under control and that was badly needed.

While I expect this to be a very close game I feel Limerick will be fresher and that will be vital in the closing stages.