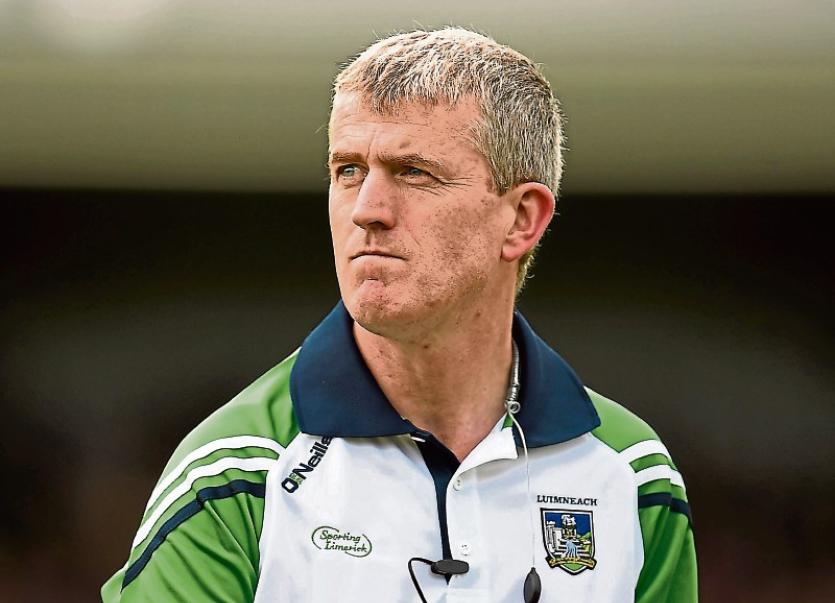 GREAT things are not done by impulse, but by a series of small things brought together...

Vincent van Gogh is credited with this statement but is appears to fit nicely as the Limerick hurling mantra in 2018.

Victory over Tipperary two weeks ago ended a two season wait for a Munster SHC win and while Green and White supporters and some hurling analysts are already talking of an extended hurling Summer for Limerick, manager John Kiely insists focus is only on Saturday at 7.00 when Limerick bid to maintain the only 100% record in the new-look Munster SHC when they play a first game in the redeveloped Pairc Ui Chaoimh.

“We won’t be getting ahead of ourselves, I can guarantee that - no one is looking beyond this weekend,” stressed Kiely at this Tuesday evening’s media briefing in the Gaelic Grounds.

“Anything can happen on any given night - it just takes a moment of lapse in concentration or a moment of brilliance and it can turn the whole thing on its head. We will take it from minute to minute - it sounds simplistic but you can’t tell what can happen because these games take on a life of their own.”

While John Kiely’s Limerick have had 13 days to prepare for the Leeside battle, Cork have just a six day turnaround from Sunday’s draw with Tipperary in Thurles.

“If you look at last weekend I think you got a glimpse into the challenge of the championship in that Kilkenny played Galway in their third game and Offaly entertained Wexford in their third game and I don’t think either enjoyed being out for the third Sunday in a row. We will have that come the final day for us and we will have to manage that. The focus is only on Saturday evening and trying to do our best and get something out of the game in Cork,” outlined Kiely.

Back-to-back championship victories for the first time since 2013 will edge Limerick closer to a place in the knockout stages with two further group games to come over the following two Sundays – Waterford in the Gaelic Grounds on June 10 and Clare in Ennis on June 17.

“I am thinking of nothing but Saturday night and get that game played and then see where we are at and then reassess on Sunday. You can’t get ahead of yourself in this competition. If you take your eye off the ball, you lose and you can’t regain lost ground. For us it’s about going to Cork and getting the best performance we can and see where that takes us,” outlined Kiely.

Limerick won the last major meeting of this sides – the 2017 Allianz Hurling League quarter final in Pairc Ui Rinn and nine of that team are again likely to be in the line-up. Limerick will also be able to call upon the experience of beating Cork in the 2017 Munster U-21 hurling final.

Cork have been installed as the 4/6 favourites while Limerick are priced at 6/4 to be the first ‘away’ team to win in this season’s new-look Munster SHC.

“They have been very impressive with a good win over Clare and last Sunday in the first half they blitzed Tipperary and if they come out like that on Saturday night it is going to be a real test for the lads to step up.”

Kiely continued: “They got a result from the two games that they have played and they are top of the table and the team probably favourites to make the Munster final and to progress in the championship. Look at the home results and it seems to be a big favour and it’s a big challenge for the team on the road to get a result”.

He added: “They (Cork) would be in pole position. They are a flaking side, fantastic athletes and look at the speed they have and fantastic skill as well. They have a lot of attributes and have put up big scores. They put a lot on the table for teams to take on and unless you are on the money with your performance, you are not going to have a shout and that’s the bottom line with Cork”.

With a free weekend from competitive fare Limerick played in-house training games last Thursday and again on Saturday in preparation for the clash with John Meyler’s Cork, which will be televised live on Sky Sports at 7.00.

Limerick opted not to have a workout in Pairc Ui Chaoimh.

“We felt we had the opportunity this weekend to recharge the batteries so why spend the whole day on the road to Cork just to go down and do a bit of shooting, when we can do that here. It’s just another pitch and while it’s a new stadium, ultimately a mass of concrete with a patch of grass inside in it with four corner flags. They are all the same size pretty much - sometimes it can be over played,” said the Limerick manager.

“From when the draw was made that we had the second weekend off and that’s the way it was. For us it was about taking the opportunity to go back to the training field and work hard to get ready for the second game and prepare ourselves for a series of three games. We got a chance to see the teams out on the second day and maybe learn a little more about the opposition and get to see them in the flesh. For us we were glad to have the break because I think rest is going to be hugely important,” said the Galbally man.

“We demand a performance, we have demanded a performance all year - from the very first game we played we demanded that type of work ethic and honesty on the pitch and that’s where our focus is for Saturday night to get a real honest, hard-working performance out of ourselves in Cork,” stressed Kiely.

“It’s the red line issue - if we don’t get that, what how we possibly expect to win the game. That’s a must in every single game,” he said of work-rate.