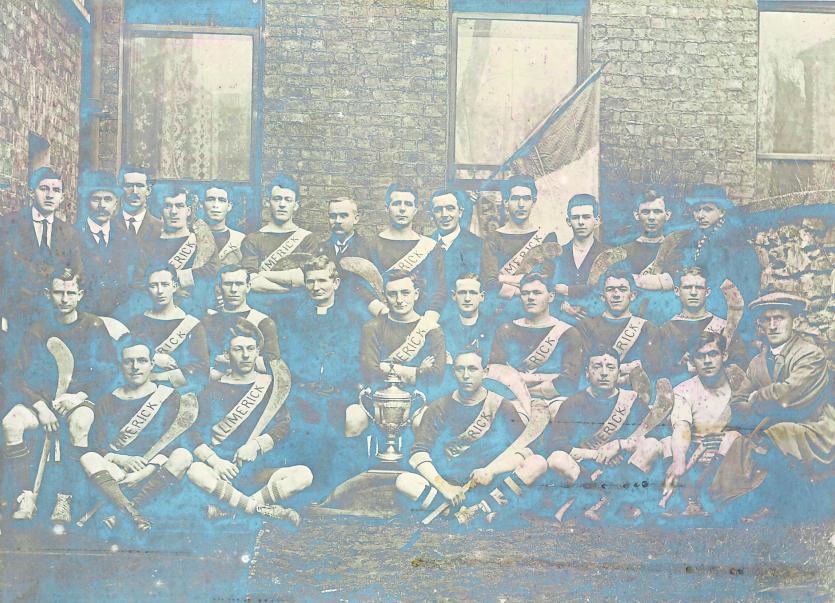 DESCENDANTS of Limerick’s 1918 All Ireland SHC winning side are sought to take part in a re-enactment of the final.
As part of the 2018 Thurles Sports Festival, there will be re-enactment of the 1918 All Ireland hurling final Limerick against Wexford – Limerick winning of 9-5 to 1-3.
Newcastle West won the 1917 Limerick SHC but surrendered their claim to represent Limerick in the inter-county championship. Instead a selection committee was put in place to select the Limerick team. The Wexford team was based on the Shelmaliers club in Castlebridge.
In the Munster SHC quarter final, Limerick beat Waterford in Waterford, 4-1 to 1-4.
In the semi final Limerick v Tipperary was played on July 7 1918 in the Markets Field – a 5-3 each draw. The replay was in Cork – August 18 – and Limerick won 3-0 to 2-2.
The Munster final was in Thurles on September 15 and Limerick beat Clare, 11-3 to 1-2.
The All Ireland final wasn’t played until January 26, 1919 with Limerick beating Wexford 9-5 to 1-3 in Croke Park before an estimated attendance of 10,000.
In next month’s hurling re-enactment the players will play with the old style hurleys made by Tipperary hurler Ronan Maher and to the rules which applied in 1918.
Each of those who take part in the re-enactment match will keep his hurley as a souvenir of the event. The sliothar was a lot heavier and larger at that time and that style of ball will also be used.
The re-enactment will take place on Saturday June 30 in the Thurles Sarsfields outside field.
A parade will take place prior to the match commencing at St Patrick’s College. The parade will consist of the teams and also relatives of those who participated in the 1918 All-Ireland final who may not be participating in the match, the Durrow High Nellies group, Thurles Scouts, vintage cars and horse and carts as well as a number of marching bands. The parade will proceed through Liberty Square to Thurles Sarsfields field in the shadows of Semple Stadium.
The 1918 Limerick team was captained by Monagea native Willie Hough, the only one of the Newcastle West winning team to make the county side.
1918 PANEL: Willie Hough (Newcastle West), Paddy McInerney (Young Ireland), Denny Lanigan (Young Ireland), Bob McConkey (Young Ireland), Willie Gleeson (Fedamore), Jack Keane (Castleconnell), Mick Rochford (Claughaun), Dan Troy (Claughaun), Tom McGrath (Claughaun), Mick Murphy (Young Ireland), Paddy Barry (Boher), Willie Ryan (Cappamore), Dick Ryan (Pallas), Jimmy Humphries (Murroe), Paddy Kennedy (Pallas).
Further details about the re-enactment available from Derry McMahon of Newcastle West GAA club at 086 3850099 or Tommy Barrett, secretary Thurles Sports Festival on 089 4487657.