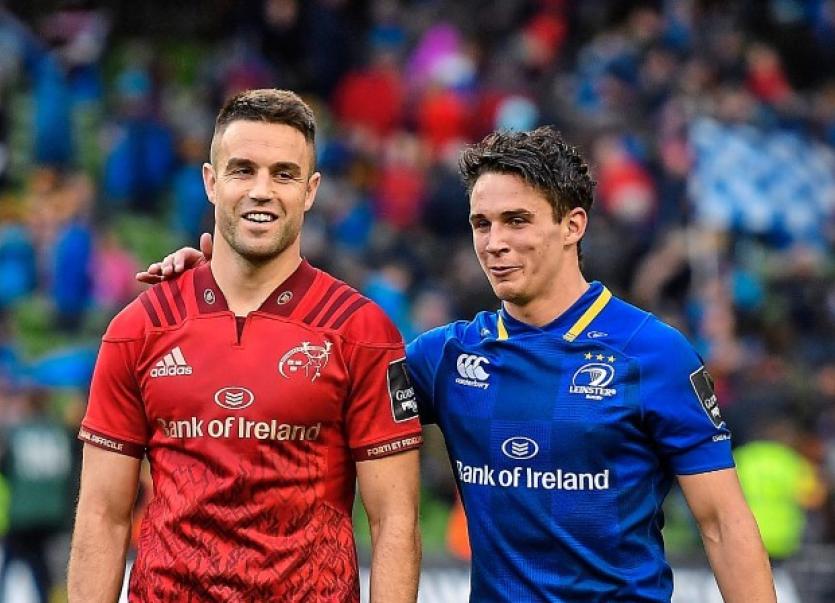 Munster's Conor Murray pictured with Leinster out half Joey Carbery

LEINSTER out-half Joey Carbery could make a move to Munster as early as next season, but only if he 'wants' to.

Ulster were deemed to have been favourites to secure the signature of the much heralded New Zealand born Irish international, but the Limerick Leader now understands that Carbery has a choice to make between both Ulster and Munster.

Indeed, the IRFU are believed to have had conversations with both Munster and Ulster around the movement of Carbery from Leinster, but the final decision is down to Carbery and 'what he wants to do', according to sources.

Should Carbery decide upon a move down the M7, Munster would need to offload one of their four out-halves, be it permanently or on loan.

Reports this week in the Irish Times claimed that Munster Rugby was a potential destination for the Leinster star, who is thought likely to leave the European champions to seek much needed game time ahead of next year's Rugby World Cup.

There were rumours last season that Ian Keatley would move to Ulster, allowing the Irish international some game time, something he had struggled to get before Tyler Bleyendaal's season ending neck injury. Keatley has one year left on his Munster contract, so a move north may not be a given.

With JJ Hanrahan capable of playing at 15 and Bleyendaal also an option at 12 for Munster, Carbery might see Thomond Park as the best fit for him and allow the high profile number 10 a chance to 'run his own team' instead of playing understudy to Johnny Sexton and more recently Ross Byrne.

The Limerick Leader also understands that any deal to bring Carbery to Limerick would have to be a permanent one, with a loan deal not being a runner for the southern province.

It now seems that all Munster, Ulster and Leinster have to do is wait for Carbery to make his own mind up. A difficult decision indeed.