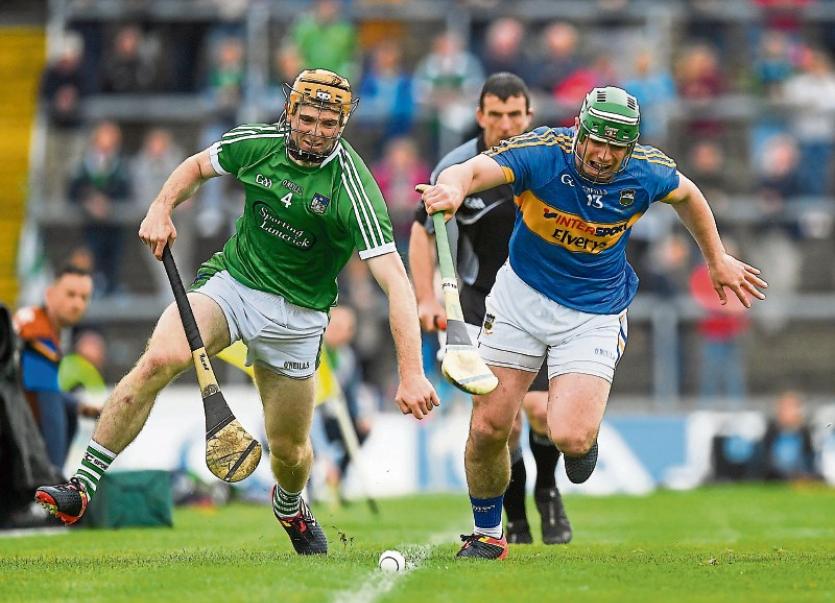 Game of inches: Richie English of Limerick and Jason Forde of Tipperary battle for possession during the Munster GAA Hurling Senior Championship Round 1 clash at the Gaelic Grounds last weekend

“THERE is a long long way to go,” stressed captain Declan Hannon after Limerick defeated Tipperary in round one of the new-look Munster SHC.

John Kiely’s men were sparkling in front of over 20,000 in the Gaelic Grounds to record the biggest championship win over Tipperary since 1981.

But players and management were quick to insist that the Tipperary win alone won’t see Limerick advance beyond the group phase of the Munster SHC.

“We worked really hard and ground out a win but there is a long long way to go and the games will come tight and fast - we are off next weekend but then there are three on the trot,” explained Hannon.

“We are trying to give performances and will try to continue to do that and where it takes us, I don’t know. We are going to judge ourselves on results this year but this is just the first round of the championship and there is a long way to go - we will know in a couple of months time where we are at,” outlined the centre back.

“The last couple of years have been very very disappointing for us and it can be very disheartening. It’s not for the want of effort but we weren’t getting the results and it was demoralising and we were going home scratching our heads wondering why we were training six times a week and not performing. This season we said if we can give performances we will be there or there abouts.”

Next up for Limerick is a Saturday June 2 trip to Pairc Ui Chaoimh to play Cork. While Limerick have a free weekend, Cork travel to Thurles to play Tipperary this Sunday.

Seamus Hickey and Tom Morrissey carried knocks out of Sunday, while Peter Casey remains out injured.

Limerick gave first championship starts to Aaron Gillane and Seamus Flanagan in the 1-23 to 2-14 win over Tipperary, while Barry Murphy got his debut off the bench – the trio hit 1-9 between them.

“It’s great to get the win because it gives us a great confidence boost. It probably wasn’t pretty for a finish but conditions did deteriorate for a finish - we kept plugging away and tried to stick to what we were doing. We ground out the win and we move on,” said Hannon.

Twelve points seperated the teams last Saturday evening in the Gaelic Grounds. Limerick now wait until next Monday morning, 8.30 on RTE Radio One, for the All Ireland SFC Qualifier draw.

Limerick will be in round one action in the backdoor series on Saturday June 9 – among the possible opponents are Mayo, Tyrone, Armagh, Cavan, London, Waterford, Offaly, Wicklow or Louth.

Limerick football manager Billy Lee hit out at “shocking” administration within Limerick County Board in his post match media dealings but will lead Limerick forward and the panel return to training this Wednesday evening.