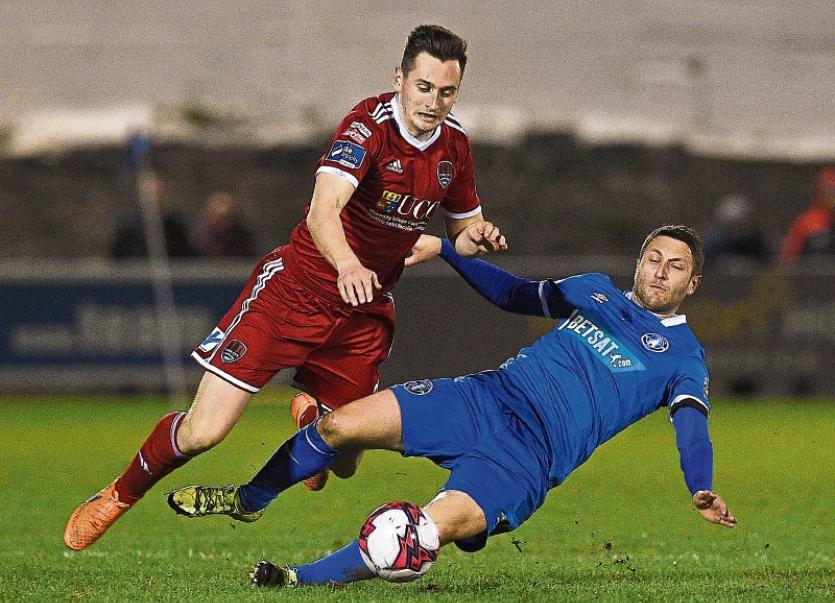 Limerick FC captain Shane Duggan wins possession ahead of Conor McCarthy, of Cork City, in their Premier Division fixture at the Markets Field in March

Ninth-placed Limerick come into the game on the back of a thrilling 6-3 victory over high-flying Waterford Utd at the RSC on Friday night.

Limerick, who had managed just eight goals in their opening 17 league fixtures, had a brace of goals from Danny Morrissey, while Karl O'Sullivan, Mark O'Sullivan, Barry Maguire and Billy Dennehy also scored.

Limerick sit in the relegation play-off position in the table at the mid-point in the season. However, the Blues are edged out of eighth place only on goal difference by Sligo Rovers.

Tommy Barrett’s Limerick face a crucial trip to the Showgrounds to take on Sligo on Friday night, 7.45pm.

Limerick had lost all three of their league fixtures prior to Friday’s win in Waterford.

Limerick played out a 1-1 draw with Cork at the Markets Field in mid-March, while John Caulfield’s Leesiders scored a 2-1 win when the sides met at Turners Cross earlier this month.

Limerick will be without the suspended Eoin Wearen for Monday night’s game. However, captain Shane Duggan will be available to play.

Limerick manager Tommy Barrett said: “We have good technical players so we can play.

“The pitch has improved at the Markets Field as well and I keep saying it that we are a good team. If we get a good pitch then we will go out and play.

“They (Waterford) are a good side. No one has beaten them down here so we are delighted to get the win. It was bit edgy in the second half but we are happy.”