Heavy defeat for Limerick footballers against Clare in Munster SFC 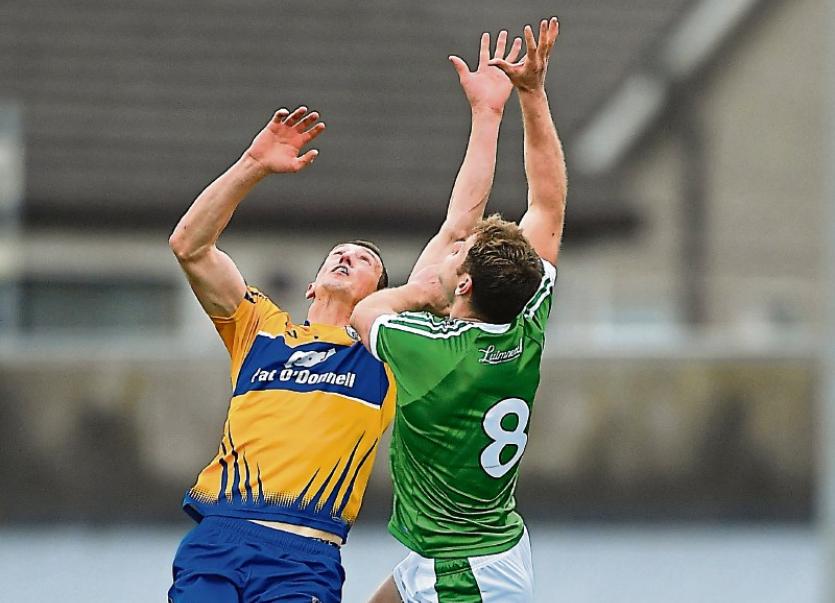 A 12 point defeat for Limerick this Saturday evening in the Munster SFC against Clare.

The 1-23 to 0-14 defeat in the provincial quarter final was the fourth successive season that Limerick lost to their Shannonside neighbours in the competition.

The heavy loss sends Limerick into the June 9 All Ireland SFC Qualifiers.

Limerick battled well but the gulf in class between the Division Four and Division Two teams was clear in front of an attendance of 2304. Limerick managed just six points from play, while Clare scored 1-22 from play.

The Banner raced into a 1-6 to 0-1 lead after 17-minutes but Limerick battled well to half time with six of the last nine points.

It took Limerick almost seven minutes to open their account with a Sean McSweeney free but at the other end Clare were having no trouble finding the posts and Eoin Cleary, Keelan Sexton and David Tubridy all had points from play before that McSweeney frees.

Then came the Clare goal – Kieran Malone finding the net after an initial fine save from Donal O’Sullivan.

Limerick steadied and Jamie Lee had the first point from play one minute after the goal. Danny Neville added another as Limerick found their feet.

Cleary had his third of the evening but Limerick continued to push forward.

McSweeney (free), second scores for Neville and Lee and it was 1-7 to 0-6. Paul White then surged forward and there was just a goal between the teams with 27-minutes played.

But Limerick didn’t score again in the half, albeit Jamie Lee almost had a goal but for a fine save from Eamonn Tubridy in the 29th minute.

Kieran Malone ended the run of Limerick scores and David Tubridy added another to leave five points between the teams at the break. The sides had evenly shared eight wides in the half.

Limerick continued on top on the restart and frees from Lee and McSweeney were pointed to leave it 1-9 to 0-9.

It took Clare 12-minutes to reopen their account but all of a flash they cancelled out the two Limerick points and it was 1-11 to 0-9 as the game entered the final 20-minutes. Eoin Cleary had successive points to bring him to five from play and Clare eased eight points clear again on 53-minutes.

But Clare continued to kick their points with ease and finally 27-minutes into the half Josh Ryan had the first Limerick score from play in the second half.

The Oola man and McSweeney had pointed frees but Clare eased into a Munster semi final with Kerry with subs Conal O’nAinifein, Gavin Cooney, Conor Finucane and Martin O’Leary among the late scorers.