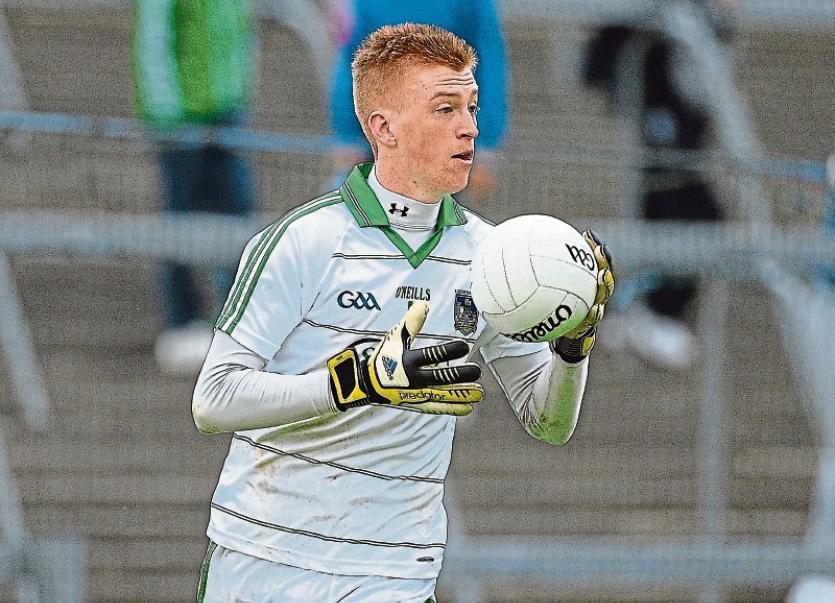 LIMERICK goalkeeper Donal O’Sullivan made his Munster SFC debut in 2013.

It was a team packed with household names – John Galvin, Stephen Lavin, Seanie Buckley, Johnny McCarthy and Paudie Browne, among others.

But it was the beginning of the end for the stars that had backboned Limerick’s rise up the football ranks throughout the previous decade.

Five years later, Monaleen man O’Sullivan is Limerick captain and one of the longest serving members of the inter-county panel.

Garrett Noonan, Eoin Joy and Iain Corbett are others with longevity in an most youthful of panels.

O’Sullivan’s debut between the posts was in Limerick’s worst Munster senior football championship defeat in 18 years. Back 1995 Kerry inflicted a 3-17 to 0-8 defeat on Limerick in the Munster quarter-final. A return of 2-10 from Maurice Fitzgerald helped The Kingdom to the 18-point win. In the Gaelic Grounds in 2013, Cork matched that 18-point margin with some ease.

For O’Sullivan and Limerick the wait for a win in the Munster SFC continues.

All form lines suggest Limerick will again struggle this Saturday, but the 2018 captain remains optimistic.

“Clare are obviously having a fantastic year in Division Two, where they looked quite comfortable. It will be a huge challenge - they have a lot of top inter-county players but that’s the challenge you want,” said O’Sullivan.

“It’s about controlling your own performance and getting enough lads to win their own battles for the team and hopefully that leads to a performance and a result,” said the 26 year old, who first joined the panel in 2011.

Limerick await the arrival of Clare in the Gaelic Grounds with just six competitive games played this season – winning one, drawing one and losing four.

“I don’t think they will read too much into it and we can only control our own performance too. They will be favourites but we will look forward to the challenge,” stressed O’Sullivan.

“The target is always championship football and from that point of view we still have the bones of the team from last year and we have added to the spine of that team,” he points out.

But the Allianz Football League was all about change with debut after debut for Billy Lee’s men – O’Sullivan remained a constant in goals.

“It’s been difficult at times,” accepted the captain.

“We have taken a lot of learnings and there have been aspects we are definitely trying to improve but it’s quite a young panel and from that point of view its about taking learnings from games and the positives of blooding young lads. We need to take the learnings from the league stages into championship and hopefully rectify them on May 19,” he said.

“We do have a significant amount of players that it’s their first year on the panel and from that point of view it does take a year or two to get up to speed from a strength and conditioning point of view or even just match experience. A lot of lads even from a club point of view have only played one or two years of senior club championship so we are hoping that their graph will go up quite highly in the year, with the view towards putting in a performance in the championship.”

In the league Limerick beat Waterford and drew with London but elsewhere defeat was their lot.

“We played the first two league games against the sides that were eventually promoted and not getting a result off them left us with a monkey on our back. We have taken on a lot from those games and we have one or two players back which will add to the strength of the panel,” he outlined.

While the Munster SHC is all change this season, the Munster SFC continues unaltered, albeit the All Ireland series will see the much hyped Super 8s introduced.

The debate continues about a complete overhaul and potential tiered football championship.

“When you look at the league and there are arguably better games in so far as the competition and spectacle. From my own end and look at the AIL in rugby where you earn your way up and it’s no harm that if you are at the lower end of the spectrum that you work your way up to the bigger table. From chatting to others lads, provincial championship are still important so.”

On Saturday he follows in the footsteps of Muiris Gavin, Ger Collins and Barry Fitzpatrick as recent Monaleen men to captain Limerick on championship day. While many opted out of the Limerick set-up in recent years, O’Sullivan remains loyal to the lure of inter-county football.

“I can only speak from my own end and I was debating going to New Zealand from a work point of view as part of my job but I had a good think about it. While you go into any new season with your eyes wide open, for me playing football for Limerick is the pinnacle of challenging yourself against the top players in Munster and Ireland.”