Limerick and Tipperary will be ‘mighty battle’ - Martin Kiely 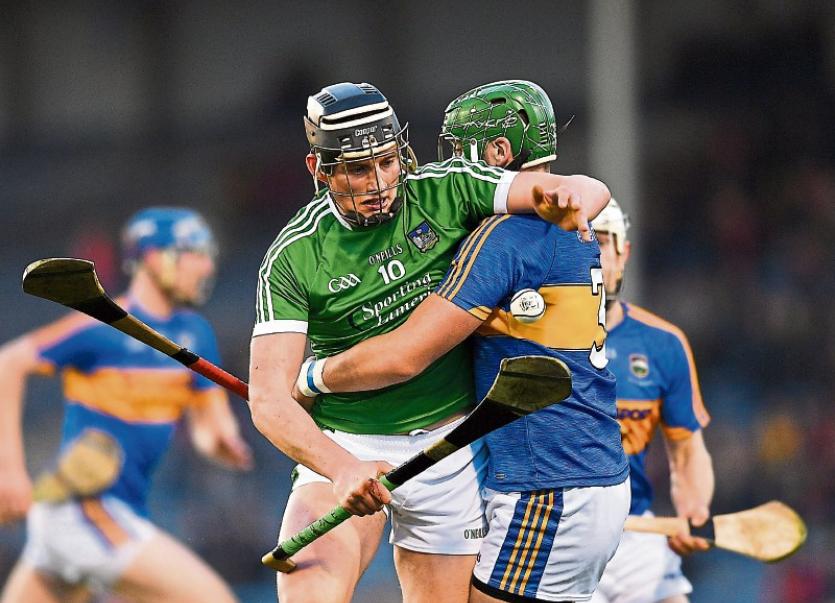 Battle Royale: Gearoid Hegarty of Limerick is tackled by James Barry of Tipperary during the Allianz Hurling League Division 1 semi-final. The two sides play for real this weekend in the championship

The build up for the start of the Munster hurling championship has been tame and understated. It will be very different in the Gaelic Grounds next Sunday as old foes Limerick and Tipperary provide the spice for the perfect opening contest.

This will be a very different championship to what we have known and time will only tell if this new structure will sustain into the future.

It is a step into the dark for all, as the new format will test the strength of teams over four games. One thing is for sure, winning the opening game is vital and when Tipperary come to town you have the ideal ingredients for a great game of hurling.

For Limerick this is a really big game, a game that will tell us a great deal about the progress of the team.

League and championship are miles apart and I am expecting a really hard physical encounter as the opening twenty minutes should see the sparks flying.

Limerick supporters were delighted to see the team progress from Division 1B of the league and finally get back to Division 1A next year but next Sunday is the real test. Limerick have made progress but crucial to winning this game will be the how the team is placed.

The week before the club championship started a combined total of 54 booked in for the weekend at the Castletroy Park hotel. Management, players and backroom staff set about building a foundation for this weekends game.

From the pitches of UL to the conference room at the hotel, plans, video analysis and tactics were discussed. On Sunday we hope to see the fruits of their labour.

The most recent encounter between the teams saw Tipperary get the better of Limerick in the league quarter final after extra time in Thurles. That game provided entertainment but it lacked the closeness of championship. That will not be the case next Sunday.

Limerick will need to battle and to be honest they will need to work really hard as a team. It will take a fair bit to break down Tipperary, yes they might have some doubts hanging over their defence but in attack they have some very serious forwards that can score goals.

Limerick have made good progress this season, however nothing that they have experienced in league will match what they can expect in championship.

The young players have made steady progress but are they ready for the shock of a big championship day at senior level? We will get a greater insight into that next Sunday.

It takes great leadership to win big championship games. It’s a collective thing that happens instinctively. The training ground provides the foundation for success, the work rate and passion must come from here and unless you do it repeatedly then you have little chance of it coming out on the day.

It takes more brain than brawn to win major games. It’s about having the cool head to do the right thing at the right time.

The most important thing in any management set up is team selection and how to get the best from the players at your disposal.

If I am honest I have some fears going into this game. I have stated them many times during the course of the league and for me the make up of our defence is the most important element of our team selection.

I have said the management have done well but I don’t think they experimented enough particularly in defence during the league. The spine of the team needs to be strong, the leaders normally hold these positions and I would be concerned if Limerick follow the pattern of the league.

At this stage I don’t expect the management to make too many changes but for me this is the team I would select.

Everyone will have their own views on team selection and where players are best suited. Tipperary are strong in attack and they will go at Limerick. They are able to create space and they are able to score goals. Jason Forde has had a great year so far and John McGrath is a proven goal ‘getter’.

Bonner Maher has only one thing in mind when he gets the ball and that is attack. How Limerick manage him will be really important. I think the Limerick management could follow the lines of the league and pick the following.

The winning of any game now depends greatly on the strength of the bench. Limerick will have options here and indeed they could surprise us all and pick some players that have not gone well in the league but have done so in training.

Names such as Donovan, Dempsey, Dowling and Downes come to mind and anyone of them may start.

The strength of the Limerick subs bench could well be the deciding factor in this game. It takes a twenty man performance to win games and I think players have to get to terms with that.

By the end of this new style championship the Limerick management will have learned a great deal about their players. We can expect team selections to change over the course of the four games and that could prove vital to the development of this Limerick team.

At the end of the league final last year I interviewed Tipperary manger Michael Ryan. He tried his best to find nuggets that he could build on but in reality his side never recovered. I met him again after the league final in Nowlan Park but it was different this time. He knew his side had done well to reach the league final but more over he had some serious players to come back.

Time and tradition will show that when Limerick go at Tipperary they have always done well. That will have to be the case again in this game but they will also have to create goal chances.

Limerick found it hard to create space for such chances during the league but I hope they have found the formula for Sunday. We will need goals to beat Tipperary.

The amount of information available to management nowadays is unreal. Between stats, graphics and video analysis it must be very confusing to both management and players.

It was interesting to hear rugby legend Paul O’Connell say at the UL GAA breakfast that he remembered nothing of what management delivered at halftime.

Too much information is worse than none. At the end of the day winning can be summed up by, Work rate, desire and application. Clip board folders and iPads have a part to play but when it matters most the players on the field must do the work, they must take the chances and they must go to a place not visited before.

This is a massive game at home for Limerick. As the weekend approaches the atmosphere will develop. The hurling championship and particularly games between Limerick and Tipperary have a way of lighting a fire of expectation. The most important thing Limerick must do on Sunday is to battle from the opening whistle, they must not allow Tipperary get away from them. All this Limerick team need now is a whiff that they are close and if they are there with ten minutes to play next Sunday then I think they will have got the ideal start to championship 2018.