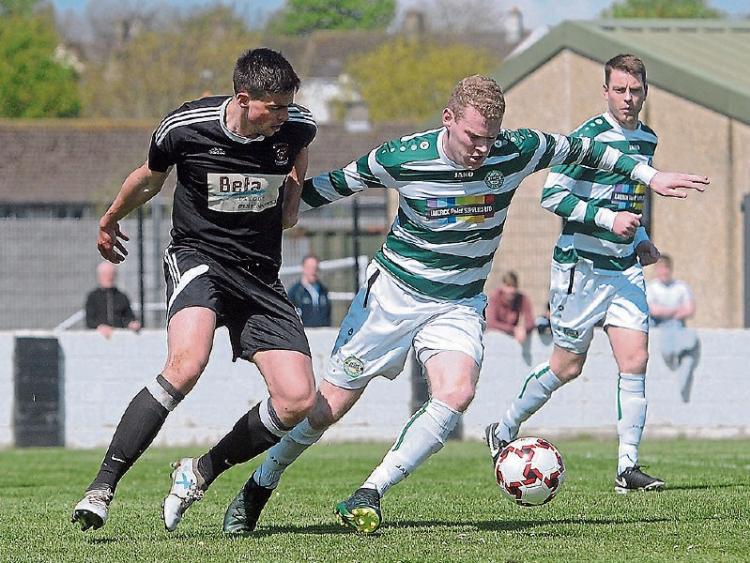 Niall Hanley, Janesboro, in action against Eoin Hanrahan, Pike Rovers when the sides met in April in the league

A huge crowd is expected to attend what could be the highlight of the season.

The two sides go into the tie in contrasting moods.

Pike are recovering physically and mentally from their defeat in the final of the FAI Junior Cup last Saturday while Janesboro are on the verge of winning back to back Premier League's for the first time in the Clubs history.

It is the second time the sides will meet in the Provincial decider as they met previously in 1981 when Jimmy McInerney's goal saw the trophy return to Pearse Stadium.

It remains to be seen how Pike have recovered from last weekend. They had a number of walking wounded after the game most notably Eoin Hanrahan and Wayne Colbert. Both hobbled out of the final and there must be doubts about their availability. A further blow to the Hoops sees Shane Walsh miss the game as he is cup tied.

Janesboro go into the tie on the back of a convincing 4-0 win over Geraldines in the semi final of the Lawson Cup. Top scorer Keith Mawdsley took a knock in the tie but it is hoped he will be okay for the clash.

Regardless of the line ups these two sides invariably produce a tight game with a single goal usually the difference.

The battles between Pat Mullins and Shane Clarke have produced some classics over the years and you can expect more of the same. The Pike defender has a further headache with Clarke's strike partner Keith Mawdsley leading the way in the goal scoring charts.

At the other end of the park Thomas Clarke will be tasked with keeping tabs on Cian Collins, who continues to sharpen after a prolonged absence.

Two of the best goalkeepers in the Province will in on show in Gary Neville and John Mulready and both will a huge bearing on the outcome.

Pike are going for their 7th Munster success while 'Boro will be looking to add their name to the trophy a third time.

The game has a 7pm kick off and should be well worth the entry fee.

Paths to the Final