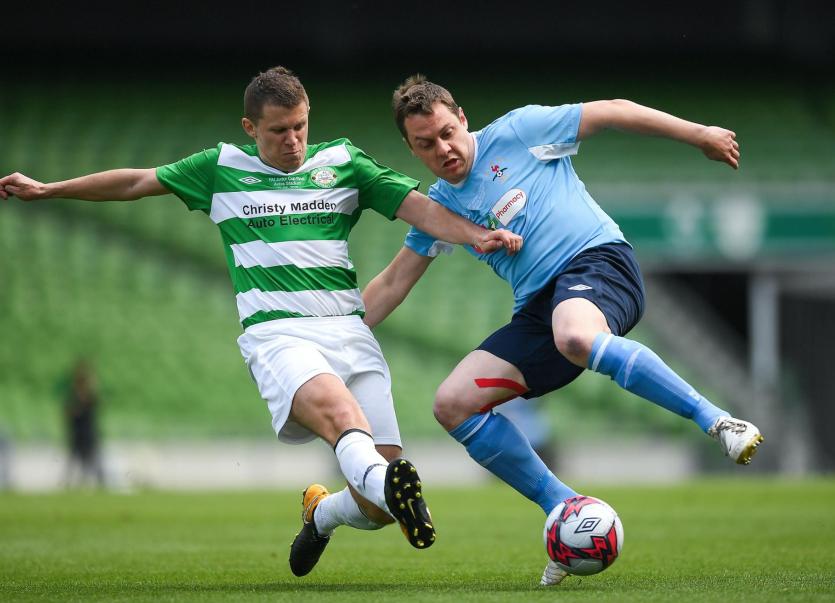 Andrew Cunneen at the Aviva Stadium

PIKE ROVERS SUFFERED shootout heartbreak in the FAI Junior Cup final at the Aviva Stadium after a hotly-contested 1-1 draw with North End United.

The opening stages felt like Pike were suffering a from two-year hangover after being shot down by Sheriff YC in 2016’s FAI Junior Cup final. They were sloppy in possession and gifted the majority of play to the Wexford counterparts.

So often, Steven McGann has been Pike’s go-to for a moment of magic but it was his error early on that almost cost the Limerick outfit.

He undercooked a pass to Wayne Colbert, allowing the experienced former Waterford United striker Alan Murphy to nip in. However, on this occasion – Pike got off the hook.

However, such is the case with Murphy’s Law that things typically wrong. And so they did. Another mix-up at the back allowed Murphy through. This time, his touch was better. His second touch brought the ball away from goal, but Pike stopper Gary Neville was adjudged to have hacked down the veteran frontman.

Pike seized the game by the scruff of the neck after what must have been an eye-opening half-time team talk.

Colin Daly’s clever runs weren’t being spotted for the majority of this tie, so he took it upon himself to make the difference on the hour mark.

Frontman Cian Collins laid-off to the playmaker on the right-hand corner of the North End box and he did the rest. Jinking in and out of tackles, Daly had the Wexford outfit chasing shadows before he was eventually up-ended by the penalty spot.

Claims for a penalty were muted, but it mattered not, as that man Steven McGann was on hand to bury past the unconvincing Lee Walker to level the tie.

As the size of the pitch began to take its toll, both sides struggled in possession. The best chance of the remainder of normal time fell to Cian Collins but Lee Walker was equal to it.

Extra-time was almost a non-event as neither side could string any moves together and the tie therefore seemed destined for a shootout from early on.

The cruellest decider in sport ultimately sealed Pike's fate, despite a valiant effort on the day.