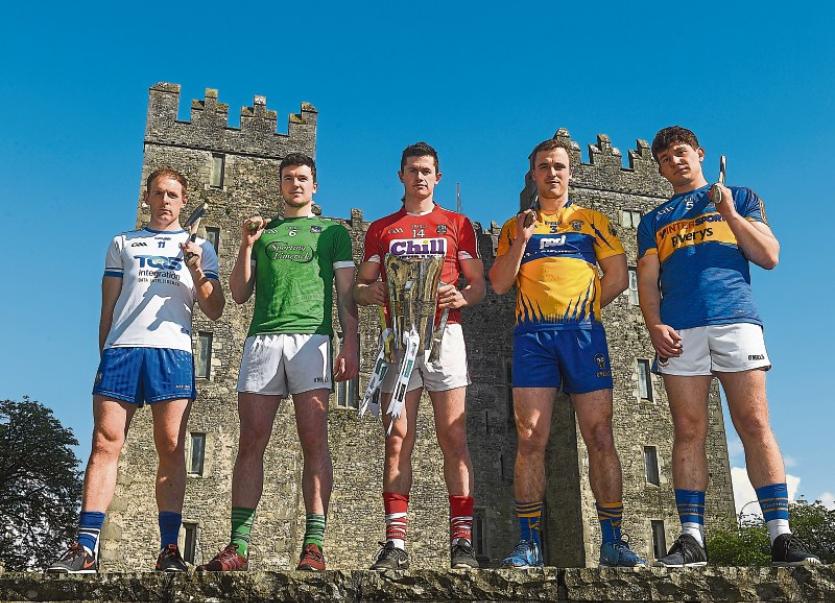 Pictured at the launch of the Munster SHC in Bunratty Castle

Tickets are all four Limerick games in the new-look Munster championship went on public sale on Tuesday May 1.

In the first week of sale, thousands have purchased tickets.

This Thursday afternoon, over 10,200 tickets were sold for Limerick v Tipperary in round one in the Gaelic Grounds on May 20.

Limerick's other home game is the June 10 tie with Waterford and already over 6,000 tickets have been pre-purchased.

Limerick travel away to Pairc Ui Chaoimh and Cusack Park.

The Limerick v Cork game is on Saturday June 2 and over 6,500 tickets have been bought in the first week.

Much attention has already focused on the final round group game between Limerick and Clare.

”Tickets are now available for all games and there won’t be any major obstacle for those games - the only game will be the Clare game,” Limerick GAA secretary Mike O’Riordan told this Tuesday’s May County Board meeting in Claughaun.

While Limerick and Clare don’t meet until the final round of group games on June 17 in Cusack Park in Ennis, the Shannonside derby has captured the public imagination.

”There are 1600 stand tickets only available for that game and I can’t see them being made available to the general public given the requirements of players, sponsors, etc. Whatever limited resources we get we will make available to the clubs,” said the secretary of the Limerick-Clare game.

”If there are tickets available, which there are, I would advise to buy right now if you are intending to go to Limerick and Clare,” he stressed.

This Thursday morning, almost 7,500 tickets were sold from the 17,500 that will go on pubic sale.

With a confirmed capacity of just under 19,000 in Cusack Park, roughly one-third of tickets for Limerick v Clare are now sold. There is less pressure in Cork and Limerick where capacity should more than cater for the demand.

The Limerick games with Waterford and Clare could yet be televised live on RTE but the schedule won’t be confirmed until after the results of the opening group games.

Tickets for all 10 games in the group stage of the Munster SHC are now on sale.

Cusack Park in Ennis is the only difference – all admission will be €20 for pre-purchase and €25 on matchday.

Juvenile tickets (U-16) will be €5 no matter when they are purchased. Students and OAPs will received a €5 concession – as was the situation in previous years, they must buy at full price and then obtain the concession as a rebate.

Tickets are on sale from Supervalu and Centra outlets and online at www.tickets.ie

"The fact that our grounds are different in capacity and contain different amounts of seats, along with the existence of the GAA Season Ticket scheme, makes offering  a 'ticket package' difficult",” said Leddy.