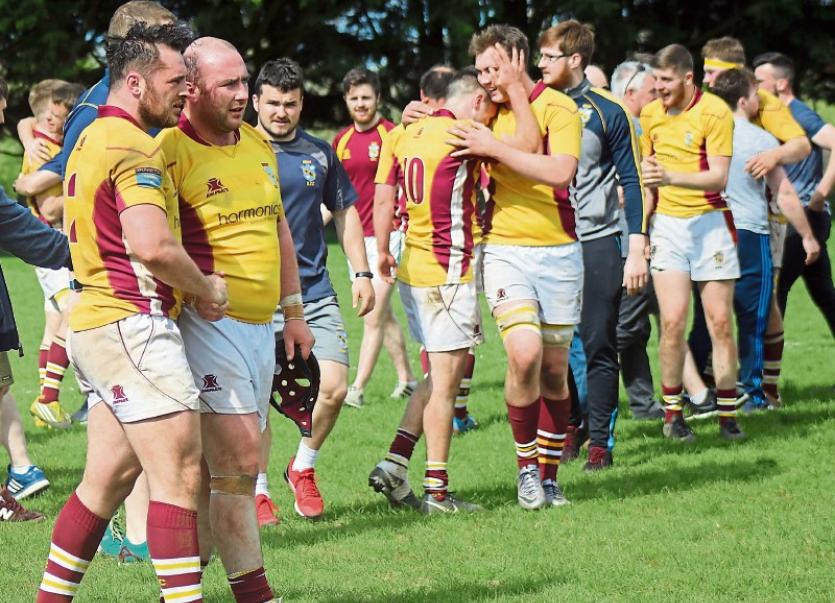 Bruff edged Bandon to retain their senior status for next season

BATTLING Bruff RFC retained their Ulster Bank League status for next season after scoring a nail-biting 24-17 play-off victory over Bandon RFC at Kilballyowen Park on Saturday.

A 79th minute converted try helped Bruff retain their senior status which they had earned in 2004 after Bandon had rallied from 7-17 down to draw level.

Replacement Brendan Deady came off the bench to grab the dramatic match-winning try late on, while David O'Grady duly added the conversion to seal a precious seven-point win for the home side.

Following their promotion to senior ranks 14 years ago, Bruff lifted the Ulster Bank League Division 3 title three years later and gained promotion to the lofty heights of Division 1B in 2010.

Bruff finished second-from-bottom in Division 2C this season, winning seven of their 18 games.

That left Eoin Cahill's men scrapping for their All-Ireland League lives, requiring a victory at home to buoyant Bandon in order to stay up. The west Cork outfit travelled in confident mood, having finished second in the All-Ireland Provincial League Championship.

Winger Christian Mulcahy's 16th-minute try saw Bandon into an early 7-0 lead. However, the South Limerick side rallied strongly to end the first half 14-7 ahead.

Experienced centre Tony Cahill converted tries from David O'Grady, who profited from a break by Liam Treacy, and Cillian Rea to give the hosts a seven-point buffer. Rea managed to barge over after some fine approach work by O'Grady, Cahill and Michael Cooke.

Despite falling further behind through a Cahill penalty, Bandon scored twice out wide through Gearoid Crowley (64 minutes) and former Cork Constitution centre Kerry Desmond (72). Both tries were unconverted, meaning the sides were level at 17 points apiece entering the final minutes.

Extra-time looked increasingly likely in Frenchman Regis Sonnes' final game in charge of Bandon, but tenacious Bruff had other ideas. Following winger Tracey's run up close to the Bandon line and several drives by the pack, the experienced Deady crashed over for the decisive try, converted by O'Grady, to keep the number of Limerick club in the league at seven.