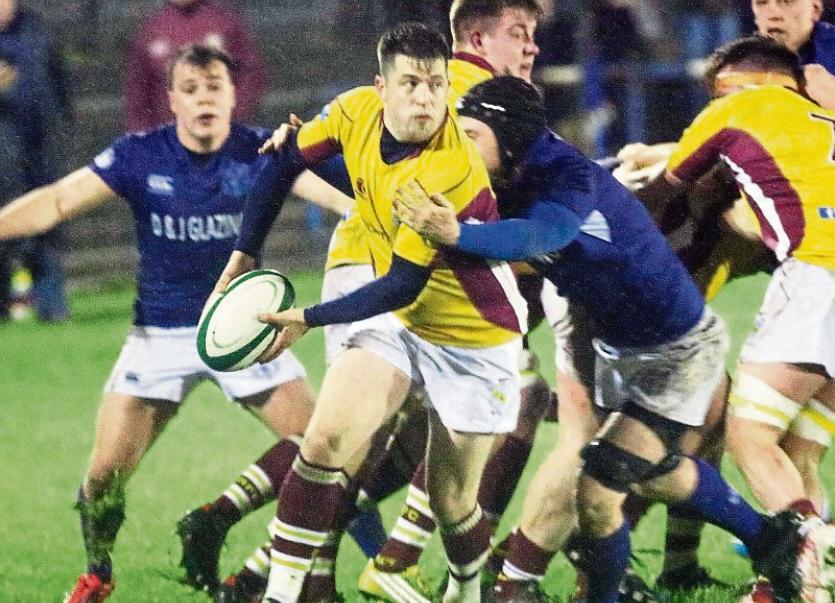 Sean Herlihy, Bruff, clearing the ball against Thomond RFC during the 2C season. The county side face Bandon in a relegation playoff this Saturday

WITH the end of the junior rugby season quickly approaching, there are still a few competitions to be decided.

After the excitement of the Munster Junior Cup final in Cork last Sunday, the relegation play-off in AIL 2C tops the bill on Saturday with Bruff’s senior status precariously balanced.

Visitors to Kilballyowen, Bandon RFC, are a very competitive side and they will fancy their chances of getting a leg in the AIL with their current squad.

Winners of the Junior Cup last season, when they got the better of Young Munster in Thomond Park, Bandon topped the Munster Junior League 1A table this season, just pipping Richmond in the final series of games.

Were Bruff to lose the game and drop to junior ranks, it would be regrettable. They have proudly represented rugby at all levels, carrying the flag for the rural strongholds of the game, producing senior international players as well providing a production line of top quality performers for senior clubs.

Saturday’s ‘winners take all’ clash promises 80 minutes of tension, high drama and rugby passion of high quality. Bruff will rally their support base for this one but they will also look back on a 2C campaign that provided some high moments before they ended up near the dreaded relegation trapdoor.

Bruff need a big game from the entire squad this Saturday. Bandon are a class side but Bruff just have to be ahead at the final whistle.

Last Sunday in Irish Independent Park in Cork, the Bruff club got a welcome boost when they beat Bantry Bay in the final of the Munster Junior Bowl by 22 points to 17.

This was a very entertaining game with Cian Clifford kicking the first points of the tie with a well struck penalty to put Bruff 3-0 up. A try by Odhran Ring pushed the Kilballyowen side further ahead at 8-0 but Bantry Bay replied with a converted try to leave just a point between the sides at 8-7.

A second Bruff try, this one scored by Patrick Thompson, made it 13-7 to the Limerick side but Bantry scored a brilliant try from the ten metre line to take a one point lead, 13-14.

Richie McAuliffe became the Bruff saviour, kicking three consecutive penalties and while Bantry Bay cut the lead to five points with a similar score from the kicking tee, the Limerick side held on for victory.

Hopefully, Bruff will have something to celebrate for the second week-end in succession next Saturday.

Also taking place this week-end are the Junior Interpros with Munster on the road to Coolmine to take on Leinster and Ulster hosting Connacht in Ards.

There were talks last season about the formation of junior international games but so far this proposal appears to be on ‘hold.’

This week-end’s interpros could be a step in that direction.

RICHMOND made it three final defeats since their last win in 1952 last Sunday when Cork Constitution just edged it in an exciting final in Irish Independent Park. The long wait continues as the city side strive to bridge that 66 year gap.

The big travelling support that made their way to Cork expressed deep disappointment. It was 3-3 after a tense first quarter but Constitution had that little extra edge that you need to win cup finals like this one. In fairness to Richmond, they fought to the finish and had they got their late seven pointer a little bit earlier, maybe, just maybe, they could have achieved their goal.

“It is always hard to take when you see players crying after a defeat, ”Richmond’s president Irene Flanagan told us after the game.

“Our boys can keep their heads up high, they played some great rugby all season but on the day Constitution did not allow us to play to our full potential and they deserved their victory. We are very disappointed to lose but that is sport. We are all very proud of this Richmond team. They have given us some wonderful moments this season.”

For those fans who travelled to Cork for this final, it proved to be a disappointing occasion.

Their impressive win over Kilfeacle in the semi-final boosted hopes of a first success in this competition since 1952 but it was not to be.

“We were really up for this final and our hopes were high but the team never really reached the form they showed all season. It’s a big disappointment, mostly for the big number of fans who travelled, but we’ll be back again next season.”

In the final of the Munster J2 league, Garryowen had a thrilling win over Cork Constitution in Dooradoyle. Tries from John Brennan and Conor Downes and two conversions and two penalties by Kevin McEvoy gave the light blues a sweet 20-17 victory over their keen Cork rivals.