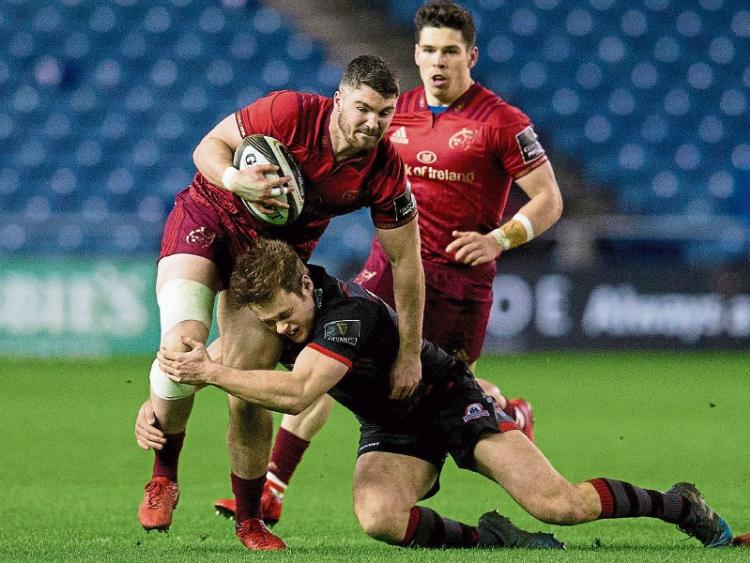 Sammy Arnold of Munster in action against Edinburgh earlier this season

FOLLOWING the loss to Racing 92 in the Champions Cup, Munster made 14 changes to their side to face Ulster last weekend. The one remaining soul? Sammy Arnold.

Arnold, who started this season playing with Garryowen in the All Ireland league, has brought his club form into the province while also securing a place in Carton House with Ireland during their Grand Slam campaign.

“Those games (with Garryowen) were hugely important for me. When you come back from injury, your timing is off. You are not doing things as well as you should. It takes time to get a feel for the game again. They are things you forget about the game when you are out injured for a while. It takes a while to get back into the swing of things. Conan Doyle, the coach at Garryowen has been brilliant for me,” Arnold admitted.

The centre's time in Carton House has only whetted his appetite for more exposure at the top level.

“I think it shows you that if you want to get there, this is what you have to do. If you want to win a grand slam, how much more there is still to learn, how much more you need to work. Joe is that guy, his attention to detail, his relentlessness, his work ethic, is unbelievable. He strives and strives and strives for perfection and I think that rubs off on the players.

"That showed during the six Nations when he went on to win the grand slam, I felt very lucky to see what it takes to win it and the hours, and weeks that goes into that was incredible.”

The more games Arnold has played the more comfortable he has looked in the 13 jersey. The former Ulster player has won Man of the Match in a Champions Cup game while he was more than capable of dealing with Messrs Nonu and Bastareaud when Munster defeat Toulon at Thomond Park.

“Ma’a Nonu was a guy, growing up, I tried to be like as best as I could, but it is kind of very hard to do that. I played a lot of 12 and loved him as a player. Basteuraud has been awesome for France for years and years and years, and I just kind of said to myself before the (Toulon) game that these guys are human, you hit them hard and it hurts and they bleed just like the rest of us. I had massive respect for them going in.

"They are two of the best centres in the world but if you go in there with an ounce of fear, you get found out early on.”

When asked if he managed to bag a jersey from the big duo, Arnold admitted that he had wanted a souvenir, but was not lucky enough to get one.

“Rory swapped jerseys with Nonu. They had a good chat and Bastareaud was taken away to do interviews so I could not really interrupt him. I will have to steal it when I see him,” he laughed.

For all Arnold's good form, one thing he has yet to do it beat Edinburgh. The midfielder has played the Scottish side twice, but is yet to taste victory against one of the form sides in the Pro14.

“I think Richard Cockerill has turned them into an incredibly physical team. If you look at them, they play simple in what they do. They exit out of their half. They play simple in their own half and when they get up the field they play physical and they try and get on top of you and best you in the collisions. That is very similar to what Leicester would have done under Cockerill.

"I think he has changed them into a very formidable team in terms of physicality. They have come on in leaps and bounds this season. They have been taking scalps all season. Like I said I think they are the form team in the Pro14 and deservedly so.”

With the potential for this weekend's clash to be Munster's last game of the season, Arnold might be forgiven for having one eye on a summer tour to Australia. Seeing as the 22 year old Surrey native was in Carton House this year, he might make the plan down under.

“Obviously if I get asked to go, I would love to go. But Robbie (Henshaw) is obviously back from injury now, Gary (Ringrose) too. Rory Scannell has been player of the year here, the rock of our team this year. I don’t like to get too far ahead of myself, my feet are firmly on the ground, and I'll take it week by week and day by day.” he added.

There was time to chat to Sammy about how the call came through for his first Ireland call up.

"I got the phone call and it said Dublin below the number and I thought, ‘I wonder who this is?’ Joe then introduced himself and asked me to come in for a few days. My girlfiend was asking, ‘who is that?’ She was roaring the house down. She was thrilled.”

When asked if he thought it was a wind up, he smiled and replied - “I could not take the risk.”