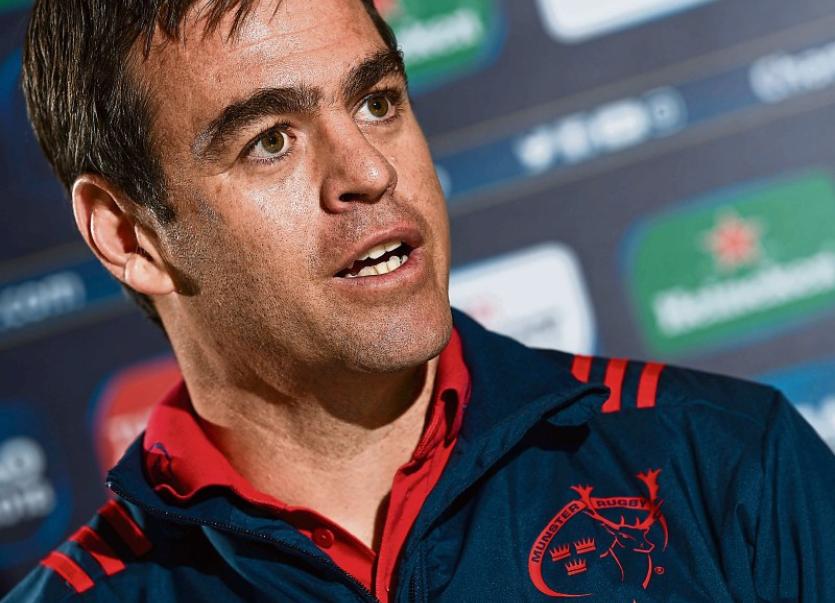 Thomond Park will be a formidable battleground for Richard Cockerill’s Edinburgh team who come into this Saturday's Pro14 quarter final after a superb season.

Edinburgh’s 15 wins were matched only by Glasgow Warriors, a tally that also set a new club record for the team from Scotland’s capital.

Munster will be eager to progress for a meeting with Leinster in the Semi-Finals. having lost in last year’s Final to Scarlets.

Speaking ahead of the game this week, Munster head coach admitted that Edinburgh are as tough a side as Munster will have faced this season.

“They did one or two things in the maul which surprised quite a few teams. You only had to watch the weekend’s game, their poaching threat and the way they attack the breakdown is something that only the Scarlets match in this competition. They have got a very interesting kicking game. Their kicking off nine is very good. It surprised a few teams. You need to clever in order to beat them. They have got a very simplistic but very good game plan. They are well drilled and have got a lot of belief. I have seen before when teams get belief and get on a roll it’s difficult to stop them. We as a squad said this week, we will have to be on our best to beat them”

On the injury front, centre Jaco Taute, who took part in the warm-up at the weekend, returned to training this week after rehabbing a long-term knee injury sustained against Cardiff Blues in September.

Hooker Niall Scannell (AC joint) and John Ryan (back) continued to be monitored by the medical team, with Ryan confirmed as not available for this weekend’s knockout game.

Those continuing to rehab, Tommy O’Donnell (shoulder), Kevin O’Byrne (hip flexor), Tyler Bleyendaal (neck), Chris Farrell (knee), and Chris Cloete (forearm) are all out for the weekend, however Cloete could see some action before the season's end.

One player who will be available is CJ Stander. The ball carrying machine will return following a rest weekend after the Racing 92 Champions Cup defeat.

“Look, we're in a job where there is a lot of pressure and high pressure. You can't dwell too long on your mistakes. For me personally, I've had a lot of losses. I think I learned a lot in rugby. Four years ago we didn't even qualify for Europe. I learned a lot then about how to work with the head and make sure that you enjoy those times. It's not the best thing, but still enjoy the lead up to it.

“It was a loss at the end of the day but you have to make peace with it because come Monday, you have to train well”

Stander is also fully aware that there is no time to look back at Racing 92, what with Edinburgh on the way to town.

“They are a team that work hard every weekend for each other. A lot of people really didn't see them coming in games, and they surprised them. They work hard for each other, have a big work rate and the team stick together. The coaching staff, they stick with their teams, especially with Richard he is a guy that coached European Cup teams, he coached Leicester and we played against them. He knows what he is doing, they haven't surprised me at all”

Stander also spoke this week about the importance of winning a trophy. Seeing as the Champions Cup dream is over, there is only one piece of silverware left to try and win.

“It (a trophy) is a thing we work for every year, it is tough to get into those semis again and a final and not get anything, especially personally if you have won something you want something again. It will be massive for the players and the coaches and from my point of view for our supporters who have always been there every Saturday pitching up to support us”

When Stander was reminded of last season's end, going home with nothing, he added that the players in the dressing room are well aware of what the losses bring, that is what drives them on as a group.

“I think when it is going well you forget about those days but when it gets tough again it is fresh in your mind. It wasn't easy. I think a lot of teams go through it through the years. It is a tough place to be. You have to dig deep in yourself. And the only people who really back you are in the room and the team”

• The Scotsmen’s only loss in the last nine rounds of the Guinness PRO14 was 20-32 at home to Ulster in round 19, whilst their only defeat in the Championship outside Scotland since September was at Toyota Cheetahs in November

• Edinburgh beat Munster 12-6 at BT Murrayfield in their only encounter this season to end a five game winning run in the series by the Irishmen.