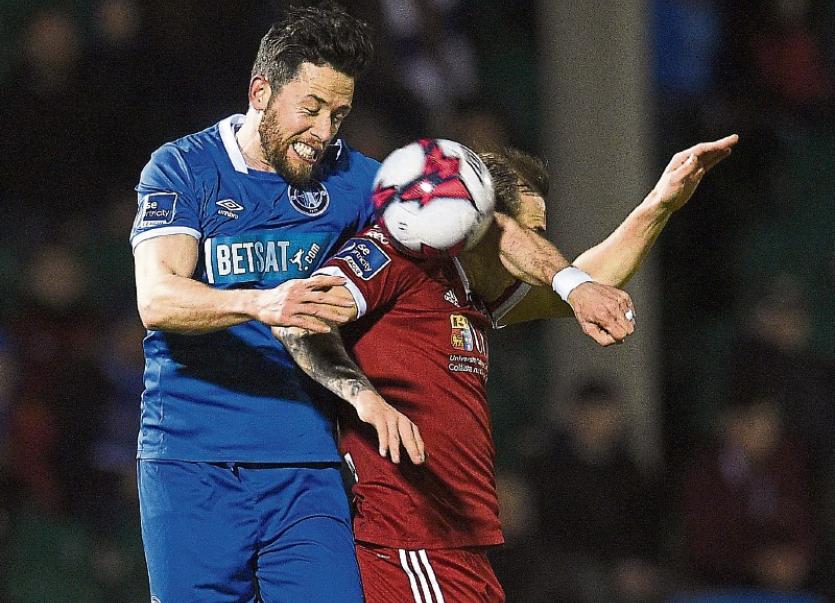 Action from when the two sides met in March this year

Tommy Barrett’s men and Cork City are both coming off the back of 3-0 league defeats – to Derry City and Shamrock Rovers respectively. The Blues will be looking to away comforts in this tie having lost five straight top-tier games at home for the first time in over 25 years.

Evidently injury-hit, Barrett hopes to have some key players back in contention. Billy Dennehy and Cian Coleman will return from suspension – the former accumulated five bookings and the latter saw red in Tallaght for a tough challenge on Aaron Bolger.

Daniel Kearns is expected to miss out, but Darren Dennehy and Shaun Kelly should be fit for this mammoth task. Mark O’Sullivan played 20 minutes against Derry City but his wasted chance to level the game gives an indication that he has rust to run off yet.

The sides have met on 13 occasions in the league since Limerick were promoted after a near-20-year exodus: Limerick have won four times – most notably in their latest triumph that saw Rodrigo Tosi and Shane Tracy put past Mark McNulty to boost survival hopes last season. Each of the four wins have come in a single-goal winning margin.

Speaking to the club website after his side’s defeat to the Candy Stripes, Barrett commented on the recent criticism of City boss John Caulfield as well as giving an update on his plans for the game.

“I don’t think there’s any pressure on them – they’re three points off the top of the table,” he said.

“There’s 60 points left to play for. But we’re not under pressure either – nobody expects us to get anything but we gave them a good game in the Markets Field. We just have to keep it tight.

“I don’t understand the criticism of John Caulfield. If he’s being criticised, there’s no hope for any of us.

Derry City manager Kenny Shiels was in a buoyant mood after his side’s win at the Markets Field but called the pitch “absolutely abysmal” and a “football deterrent” in an interview with the Derry Journal afterwards.

The Limerick Leader spoke to the LEDP following Shiels’ criticism of the surface, and CEO Liam McElligott stated that “[he thinks] the surface speaks for itself. It is a top-class pitch”.

Kick-off in Cork is at 2pm.

For more on Limerick FC see www.limerickleader.ie or use #LLSport on social media.