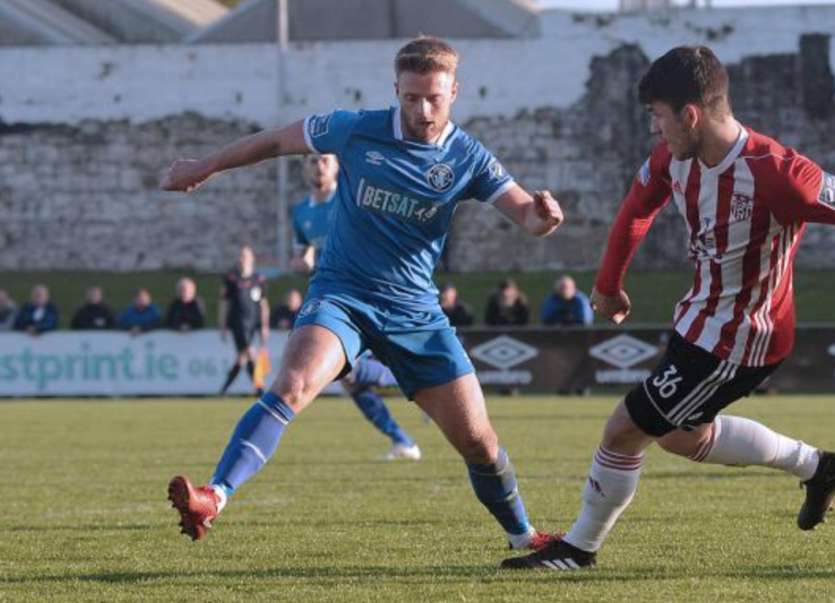 Frustration was the resounding emotion in the North Stand of the Markets Field stadium as Limerick FC slumped to a three nil defeat to a Derry side who looked like they never got out of second gear.

Limerick started in a 4-2-3-1 formation with Alan Murphy making his debut at left back and Killian Cantwell on the right side of a defence which contained two more academy graduates in Tony Whitehead and Killian Brouder.

Murphy, I felt, acquitted himself well before making way for Mark O’Sullivan in a tactical switch to 3-5-2 with twenty minutes to go. Killian Cantwell also proved once again, with his versatility, what a great signing by manager Tommy Barrett he has turned out to be.

Killian Brouder continues to impress (giving away a late penalty aside) and was commanding in the air while also being very impressive in possession of the ball. With his left foot, the towering centre back delivered some wonderful long diagonal passes throughout the game that man of the match Karl O’Sullivan used to Limerick’s advantage.

Clifford and Wearen were the holding midfielders and while I felt they over played at times, their early passes over the Derry defence for O’Sullivan and Fitzgerald to run on were too few and far between. However both tackled well and also showed good technique in possession.

With the aforementioned duo, alongside captain Shane Duggan, Limerick possess as good a midfield three as there is in the bottom half of the table. Duggan again ran his heart out for the team but the lack of quality in front of him in attack really came to light again against Derry City.

Despite being well on top overall in the first half Limerick fell behind on the stroke of half time to a Rory Patterson goal and the game remained that way until a brace from Aaron McEneff with only seven minutes remaining sealed Limerick’s fate.

Prior to the opening goal, Limerick missed more chances than they have created in all their homes to date put together. Firstly through Shane Duggan, in the very first minute of the game, however the skipper blazed over from a Karl O’Sullivan cross.

On twelve minutes Danny Morrissey was put through again by O’Sullivan but failed to hit the target. With the game still at one nil and only seven minutes remaining, substitute Mark O’Sullivan missed a free shot at goal from no more than eight yards.  A chance to give Limerick at least the point their play warranted was blown because the former Waterford Utd frontman chose to use his laces instead of the inside of his foot when the chance was presented.

When finishing chances inside the opposition penalty area the inside of the foot is the suggested technique to use while outside the box the laces are used to generate more power. O’Sullivan, while a willing runner and worker for the team, currently lacks this type of  technique in front of goal.

When Limerick switched to a 3-5-2 formation in an attempt to salvage a point, Derry immediately exploited the open spaces in the wide areas where, without full backs, the Blues were vulnerable. In this system, on defensive transitions, the three central defenders Cantwell, Whitehead and Brouder needed to spread out quickly to cover the full back positions with Eoin Wearen dropping in from midfield and making that back three a four. This didn’t happen and goals from Aaron McEneff highlighted it.

In my opinion a switch to 4-4-2 might have been more beneficial on this occasion. Playing with two strikers against a team who is playing with only one means that some other unit in the team is going to be overloaded. On the night that was the midfield unit, however this could have combated on defensive transitions by wingers becoming narrow as they would have had full backs behind them.

With set pieces also not providing goals or opportunities, there is a lot for Tommy Barrett to ponder before a trip to league champions Cork City on Saturday afternoon as his side are now sitting in the dreaded play-off position and above only Bray Wanderers in the table.