Limerick Ladies U-16 footballers march on to Munster final 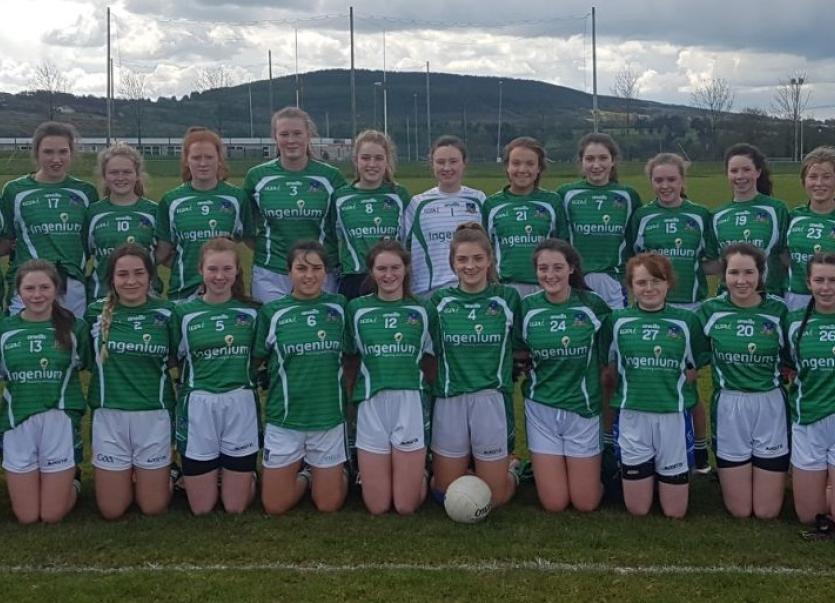 It was déjà vu for Limerick ladies U-16 footballers in Mallow on Saturday when they faced Waterford in the Munster semi-final after already meeting them in the opening round of the Championship.

This was always going to be an competitive affair after a hard-earned 4 point win in the previous match and the supporters were entertained to a football game of high quality.

Waterford started the brighter and an early goal put them in the lead but Limerick responded with a point from Iris Kenneally. They say that goals win matches, but ensuring that they are not conceded at the other end is also vitally important, and so it was the case when Emma Ryan made an excellent point-blank save from a Waterford forward to keep the opposition at bay. Back down go Limerick to the other end of the pitch and a cracking shot into the roof of the net by Orla Coughlan put Limerick immediately back in the game. Further scores by Iris Kennelly, Sarah O’Brien and Emma Donovan put Limerick ahead by 2 points at halftime, on a score line of 1-6 to 1-4.

Cometh the hour, cometh the player. The second half was like a flashback to the All-Ireland U14 final two years ago when Iris Kennelly gave a player-of the-match performance when scoring 2 goals in the second half to ease Limerick to victory. She did the same again in Mallow on Saturday to put Limerick firmly into the driving seat. Form is temporary but class is permanent!

A point by Caoimhe Rael put Limerick 7 points ahead with time running out for the Waterford ladies. A goal for Waterford with practically the last kick of the game brought the margin back to 3 points but there was no doubt that Limerick had all the hard work done and were not going to be beaten.

This was an outstanding performance from 1 to 25 and the tenacity and sheer doggedness of the six backs right throughout the game thwarted wave after wave of Waterford attacks. The mid-field partnership of Emma Donovan and Aoife Morrissey worked tirelessly from start to finish and the forward created score after score which was as a result of great passing movements and no little skill.

Let’s be in no doubt – this was an excellent performance from an outstanding committed bunch of girls and they now have the belief they can more than match Clare in the Munster final. A special word of thanks to the parents and supporters who have followed this team right throughout the year and hopefully they will have their day in the sun next week in the Munster final.