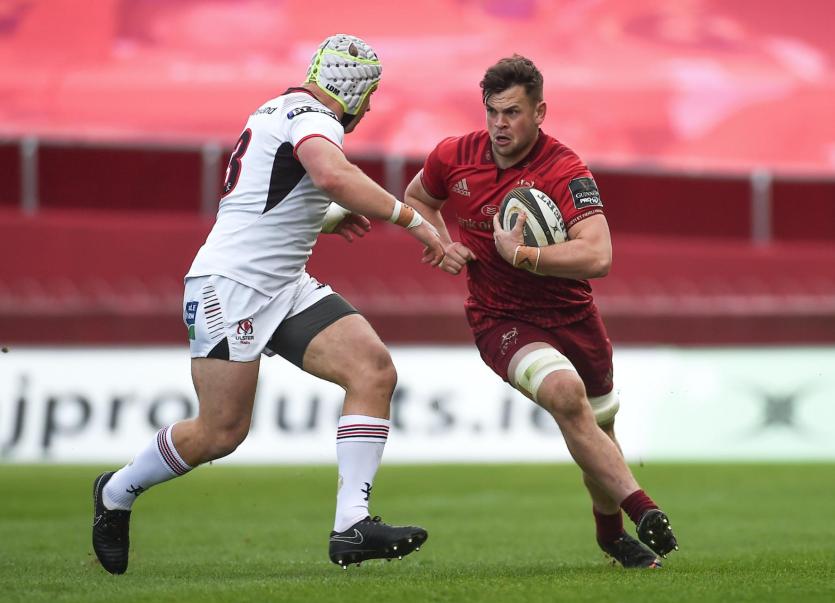 Conor Oliver of Munster in action against Luke Marshall of Ulster during the Guinness PRO14 Round 20 match between Munster and Ulster at Thomond Park in Limerick. Photo by Diarmuid Greene/Sportsfile

Munster prepared for their Pro14 quarter final next weekend (Saturday at 3.15pm in Thomond Park against Edinburgh) with a 24-24 draw with Ulster at Thomond Park this evening. Johann van Graan's side showed several changes from the side that lost to Racing 92 last weekend in Bordeaux and the understudies battled well to secure a hard fought two points.

The game could not have started better for Munster as Duncan Williams pounced on a lose ball as Ulster's David Shanahan had the ball knocked from his hands by Robin Copeland. The returning scrum half reacted first to score. In a rather novel turn of events JJ Hanrahan convert the try unaware the referee had asked for the TMO to confirm the score. Hanrahan had to retake the kick, which he duly converted once more. (7-0)

Rapid start at Thomond Park!@WilliamsDuncan opens the scoring for @Munsterrugby against @UlsterRugby with an opportunistic pick-up...

The lead only lasted 3 minutes as Stuart McCloskey crossed for a try following a line break by Grand Slam winner Jacob Stockdale. There seemed to have been a forward pass leading up to the try, however Ben Whitehouse allowed the score and Ulster levelled when Johnny McPhillips converted the conversion. (7-7)

How about that for a response?@UlsterRugby level the scores at @Munsterrugby as @JacobStockdale picks up the loose ball and offloads to @Stuart_Mc12 for the try

The visitors were to go into the lead for the first time after 15 minutes when Johnny McPhillips kicked a penalty following an infringement at the ruck by Munster. (7-10)

Munster grew back into the game and their line speed in defence paid off when a penalty earned at the ruck by Mike Sherry earned them some much needed field position. Following a line break from Darren Sweetnam, Munster's forwards were on hand to pick and go in the Ulster 22, before Brian Scott crawled over for a five pointer after 28mins. When JJ Hanrahan converted, the home side led 14-10.

Munster were minutes later reduced to 14 men as Robin Copeland was sin binned for deliberately bringing down a maul. With only seven forwards Munster were powerless to stop Rory Best cross off the back of a maul for his side's second try of the half. McPhillips kicked the conversion to leave the scores 17-14 after 34 mins.

Rory Best was to repeat that trick just five minutes later. An almost carbon copy maul saw the Irish captain cross for his second try having been in the corner for a line out following a high tackle by JJ Hanrahan. With the half whistle blown, McPhillips kicked the conversion to make it 24-14 to the visitors at the break.

Marvel at the strength of @UlsterRugby captain @RoryBest2 as he scores his second try against @Munsterrugby just before the break.

The second half started slowly, however Munster did come to life in the 48th minute. Pressurising the Ulster line before forcing a yellow card for centre Luke Marshall. From the resultant penalty, Munster took Ulster through the phases before a Gerbrandt Grobler off load set the prop up for a try, only for the former Dolphin man to knock the ball on as he crossed the line.

Referee Ben Whitehouse went back for an advantage to Munster and the province did not make the same mistake again as Robin Copeland crossed for a five pointer in the 50th minute to make up for the disappointment of Cronin's error. (24-21)

The hosts hit back!

With @UlsterRugby down to 14 men, @Munsterrugby claim their third try as Robin Copeland smashes over the whitewash!

With 67 minutes on the clock, Munster were awarded a penalty following a successful poach by Jack O'Donoghue. JJ Hanrahan duly converted the kick to leave the scores at 24-24 with the momentum back with the hosts.