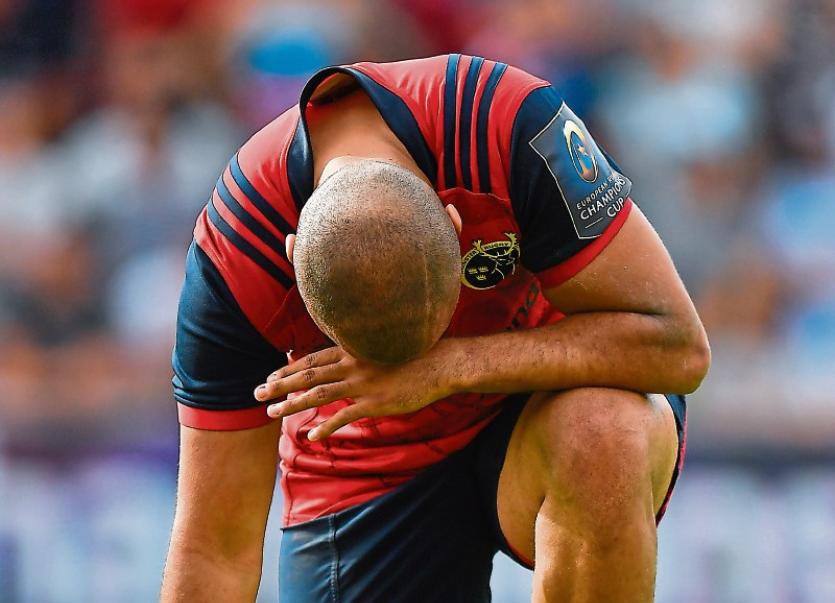 A dejected Simon Zebo after the defeat to Racing 92

AS charter flight LS6573 began its final approach to Shannon Airport shortly after 10.30pm on Sunday night, a passenger sitting towards the front of the aircraft tried to encourage those on board to break into song.

A few rows of seats back from where the Munster players and management team sat on the charter flight, the passenger sang the opening line of ‘Stand Up and Fight’ – or more accurately – croaked through it.

The 737 aircraft was full, but there were no takers for a song. Players, management and supporters alike were tired and emotional.

A sixth Champions Cup semi-final defeat in 10 seasons for Munster had sucked the life out of all on board. Munster have an issue when winning the marquee fixtures at the business end of the season.

A few hours earlier at a packed Bordeaux Airport, ripples of applause greeted the Munster players as they passed through the terminal building on their way to departure gate 92.

Players with heads bowed, the haunted look of a big game defeat etched in their faces filed through in dribs and drabs.

Thousands of Munster supporters watched them pass, some moved forward to shake the players hands or offer a comforting pact on the back.

As they approached their departure game, the Munster players passed by the only serene, calm area of the entire airport, the area where the Racing 92 players waited to board their impressive looking jet back to Paris.

There were no supporters milling about it, no cheering, clapping. The Munster players were sharing their flight with hundreds of their most passionate supporters, the majority of whom have been travelling to every away Champions Cup game for more than a decade.

A number of those on board had just returned from South Africa having spent two weeks there as Munster played two Guinness Pro14 fixtures against the Kings and Cheetahs. The trips build the strong bond between players and supporters.

The fans are respectful, recognising the players need their space and are left alone.

The Racing 92 players and management team were travelling as a group, left alone to bask in the glory of their Champions Cup semi-final success before returning to Paris.

Up to 8,000 Munster fans travelled to Bordeaux last weekend to support the province. Some spent one, two or even three nights in wine country. Several thousand more came on day trips.

An attendance of close on 25,000 at the Stade Chaban Delmas on Sunday was impressive. Racing 92s numbers were no doubt swelled by a pocket of Bordeaux rugby fans who lent their support to the Parisians.

With the 'galacticos' of French champions Paris St Germain in town on Sunday night for a glamour Ligue 1 fixture with the local FC Girondins de Bordeaux at the nearby Nouveau Stade de Bordeaux, the vast majority of the local sporting public were taken up with events there rather than at the quaint Stade Chaban Delmas.

Intriguingly, dozens of Clermont Auvergne fans made the 750km round trip to Bordeaux to support Munster for the day. Many were dressed in red Munster T-shirts, but the colours they sported elsewhere, indicated where their long-term loyalty lay.

Munster go again this Saturday when Ulster visit Thomond Park for a final round Pro 14  game. It will take time for Munster to get over Sunday’s defeat.

The odds are stacked against the province bouncing back to win the Pro 14 title. But Munster have beaten the odds before.