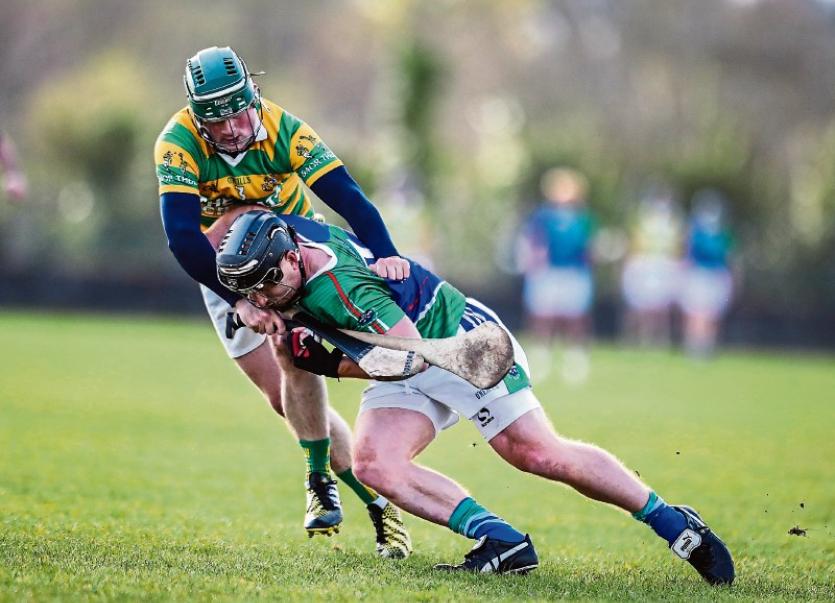 Finn Hourigan, Murroe-Boher attempts to break past Patrick Carroll, South Liberties in the Limerick SHC round one

EVERY Limerick SHC title this decade was won by the Big Three of Na Piarsaigh, Kilmallock and Patrickswell.

That trio signaled their 2018 intent with round one wins in the Credit Union Limerick SHC last weekend. The trio were Group One winners in the new seeded championship.

In Group Two, Ahane, Monaleen and South Liberties had wins.

None of the six round one winners meet in round two action this Saturday and Sunday ahead of the break for the Munster SHC – round three of the Limerick SHC takes place on July 27-29.

There are two games this Saturday.

Champions Na Piarsaigh are first into action. The Paul Beary managed Caherdavin men had eight points to spare over Doon in round one and that was without Peter Casey and David Breen from their All Ireland club SHC final replay defeat just four weeks earlier.

On Saturday (3.30) in Bruff, Na Piarsaigh play Ballybrown. When these sides last meet in the championship Ballybrown were 5-12 to 0-21 winners in September 2016.

Ballybrown scored just two points from play as they lost to Kilmallock by 14-points in round one.

Also on Saturday (5.00) Cappamore play Monaleen in Kilmallock in a repeat of the 2016 Premier IHC final, which Monaleen won. Tony Power back Cappamore coach on that occasion but is now part of the new management team with his home club Monaleen. Former Limerick hurler Damien Reale is the Monaleen manager.

On Sunday (1.00), Ahane play Murroe-Boher in Cappamore. Ahane needed to score the final five points to overcome Cappamore in round one, while Murroe-Boher looked on course for victory until a late South Liberties scoring run.

Patrickswell and Doon were the beaten Limerick SHC semi finalists last year. On Sunday (2.00) in Kilmallock they meet for the first time since The Well’s 2016 quarter final win. Aaron Gillane scored an early goal in the big Patrickswell win over Adare in round one but then limped out of action 10-minutes into the second half.

There are two games Sunday evening at 7.00.

In Newcastle West, Kilmallock play Adare. The sides haven’t met in this championship since Kilmallock’s two point quarter final win over 2014. Adare have won both games to-date in their Limerick SFC title defence and called upon six duals players in their disappointing 14-point hurling loss to Patrickswell last Saturday.

In Bruff, South Liberties play Knockainey. U-21 player Brian Ryan was the Liberties’ hero in their 1-13 to 1-12 round one win over Murroe-Boher, when Barry Nash scoring the winner’s goal.

After this weekend’s club championship, attention turns to the Munster U-21 hurling championship – Limerick travel to Ennis to play Clare on Bank Holiday Monday, May 7.