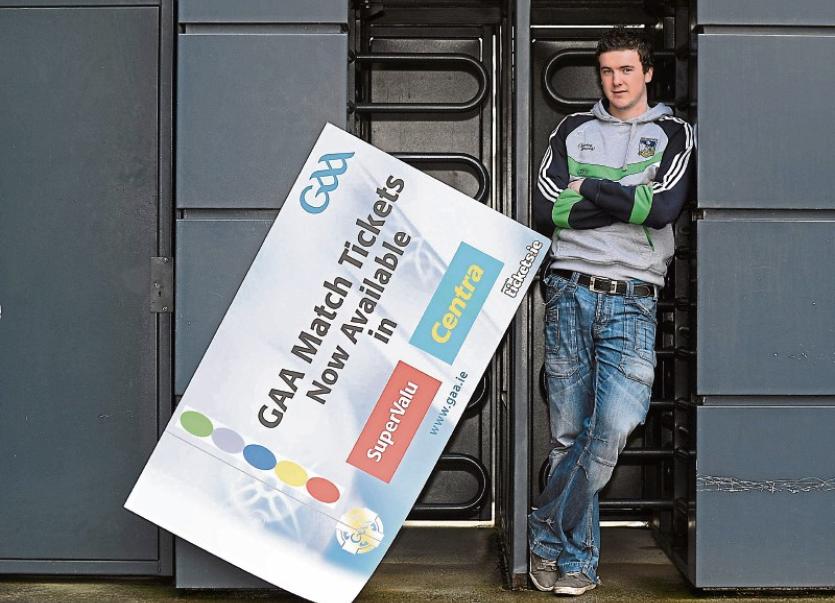 Declan Hannon at a 2012 announcement of ticket sales

TICKETS for Limerick's four round robin games in the new-look Munster SHC will go on public sale on Tuesday May 1.

The Munster Council have confirmed that tickets for all 10 games in the group stage will go on sale together.

Tickets are being priced at a pre-purchase price of €20 for stand tickets and €15 for terrace tickets if bought in advance of matchday. On matchday, stand tickets will be €25 and terrace €20.

Cusack Park in Ennis is the only difference – all admission will be €20 for pre-purchase and €25 on matchday.

Juvenile tickets (U16) will be €5 no matter when they are purchased. Students and OAPs will received a €5 concession – as was the situation in previous years, they must buy at full price and then obtain the concession as a rebate.

The tickets will go on sale from Supervalu and Centra outlets and online at tickets.ie

County Boards will receive an allocation for distribution to clubs, sponsors, players, etc but the majority of tickets are expected to be sold from the shop outlets and online.

"In recent years, there has been a major change in how supporters purchase tickets, with greater numbers of tickets being sold through the Tickets.ie network (Supervalu, Centra and online), and less tickets being sold through County Boards. Last year, for example, for the two hurling semi finals and the quarter final, of the total attendance of 82,429 that attended the three games, Tickets.ie (Supervalu, Centra and online) sold 48,639 (59%) of tickets, while the participating counties sold 10,751 or 13% of tickets. Sales at the ground amounted to 9,685 tickets, or 11.7%. Other channels, such as sales to the Season Ticket scheme, accounted for the remainder," outlined Leddy.

"Last year, three counties in Munster played one Munster Senior Hurling Championship game, whereas this year, all five counties will play four games. Therefore, the new format will present new challenges in terms of ticket sales, and it will be impractical for counties and clubs to handle large amounts of tickets, given that there will be just one week between most of the games. It is time consuming for clubs to receive orders, forward orders to the County Board, receive their allocation, distribute the tickets, collect the payment and forward the payment to the County Board. Therefore, our aim is to place the majority of stand tickets on sale through the Tickets.ie network and to encourage pre-match day sales," he outlined.

"We want to avoid large numbers of people coming to the grounds on the day to purchase and with 120 Supervalu and Centra stores across the province selling GAA match tickets, and with the buy online and print at home option, it has never been more convenient for supporters to source tickets. We also want to ensure that those who buy early get the best available tickets. However, County Boards will receive an allocation for distribution to clubs, sponsors, players and so on, but the majority of tickets will be placed on sale through the Tickets.ie network, which as already stated, has been selling most of our tickets in recent years."

He added: "The fact that our grounds are different in capacity and contain different amounts of seats, along with the existence of the GAA Season Ticket scheme, makes offering  a 'ticket package' difficult".

"A different arrangement will be in place for the final and the competing counties will receive a much larger allocation."