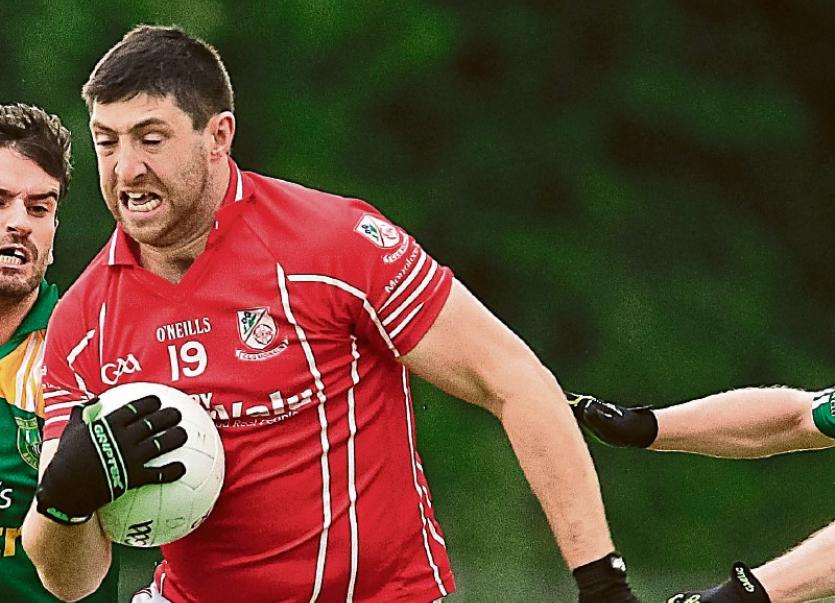 MONALEEN and Na Piarsaigh played out a draw in the Limerick SFC this Thursday evening.

It finished Monaleen 2-6 Na Piarsaigh 0-12 in Claughaun, in a game that was called off at half time almost two weeks ago due to thunder and lightening.

A 40 metre Aaron Costelloe free from out near the right sideline tied the scores two minutes into injury time to give Na Piarsaigh some reward for a clash they dominated in terms of territory and possession throughout.

After Graham O’Connell’s free opened for Monaleen off the the first action from the throw-in, Na Piarsaigh put a successions of pretty movements together which didn’t lead anywhere. Their opponents’ more direct approach yielded a second score from Brian Carson before the Northsiders’ dominance of possession drew a free for Eoin Hogan to convert.

After more moves forward died from lack of conviction, Tommy Grimes took it upon himself to fist over the equaliser off a movement created by Ronan Lynch but the Castletroy side immediately struck back when Dan Enright split the post off Jack Hoare’s pass. The three scoring minutes continued with Grimes then hoofing over from distance and his midfield opponent Dan Power replying off the next action.

There matters stood as the game snoozed as Monalen were content to contain Na Piarsaigh to hopeful pot shots until a quick break led to skipper Luke Kavanagh restoring their lead. However, the Northsiders kept pressing and were rewarded in injury time when skipper Kevin Nolan arrived from defence to tie the scores at 0-5 apiece.

Monaleen reverted to six forwards for the second half and Luke Kavanagh restored their lead within a minute by catching the delivery and brushing off the challenge to score.

Bursting in from the wing, Gordon Browne’s rasper was tipped over by Limerick captain Donal O’Sullivan’s spectacular diving save and they quickly followed up as Hogan put them ahead for the first time.

However, Na Piarsaigh continued to dominate possession and draw the fouls. After a few efforts went astray, Costelloe tried his luck from the right corner to send over an inspiring equaliser.

Then a long Cian O’Dwyer delivery was spilled by the advancing Collins and Tony Barry didn’t turn down the simple tap over the line.

It was game on when Brown took on the challenges to reduce the margin to one but frustratingly distant as Monaleen’s Jack Hoare and Pádraig Quinn gained enough injury time possession to eat into the clock before a turnover led to the last gasp free that Costelloe converted.