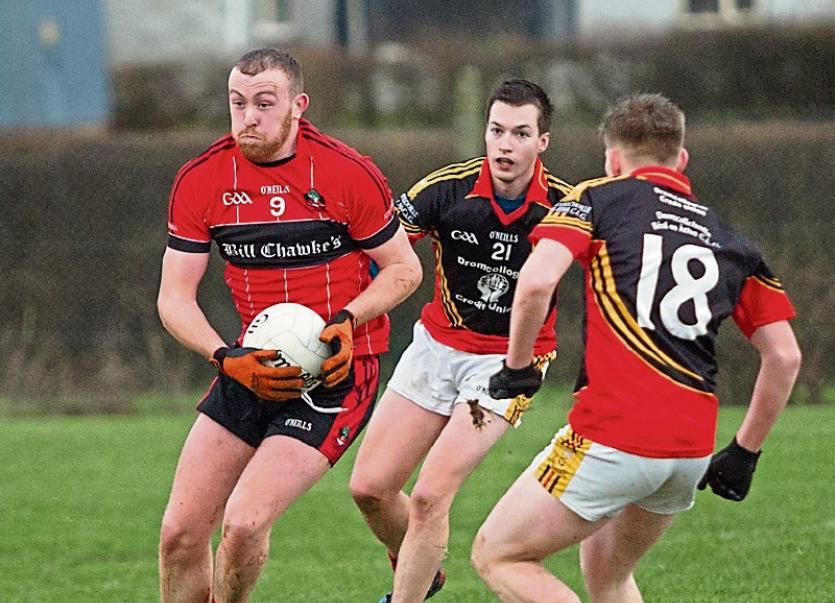 Adare beat Ballylanders this Saturday evening, 2-12 to 0-15 in Caherdavin to follow up last week’s opening round win over Drom-Broadford.

In the only other game played this evening, Dromcollogher-Broadford bounced back to winning ways with a 0-10 to 0-6 win over Na Piarsaigh.

Adare were 1-7 to 0-6 ahead at half time with Hugh Bourke goaling before half time. Four Kieran O’Callaghan frees had kept Ballylanders in the game in the first half but points from Jack English and Robbie Bourke frees had Adare in pole position before the Hugh Bourke goal.

Ballylanders started the second half on top and four points in a row had them ahead with Dave McCarthy and Brian O’Connell among the scores.

But back came Adare and Charlie McCarthy had their second goal. Davey Lyons points sealed the win.

Drom-Broadford finished strongly to secure their win over Na Piarsaigh in Askeaton. The winners were 0-4 to 0-3 ahead at half time – Dylan Cronin, Aaron Costelloe and David Dempsey had the city side clear before Gerard O’Gorman, Cillian Fahy and Kevin Noonan frees hit back.

Dylan Cronin and Eoin Hogan points had the game level at 0-6 each but the west Limerick side finished on top with points from Ray Lynch, Paul Madigan and Keith Lacey.

Elsehwere in round two, Monaleen v St Senans and St Patricks v St Kierans were both called off on Friday evening due to the weather.

There are two games on Sunday (6.30) – Fr Caseys v Newcastle West in Athea and Oola v Ballysteen in Clarina.