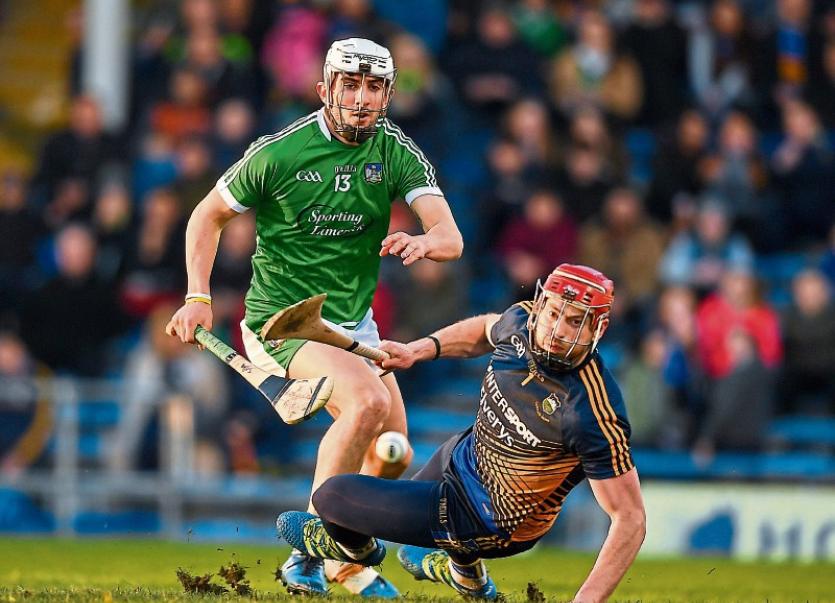 Limerick ended their National League run in Thurles last weekend but we learned enough to suggest that this group of players have potential to deliver much more as the year progresses.

This was a cracking game of hurling and one that saw them build on the previous games in the league. It was a game of drama and much excitement and when the Limerick management look back they will also see lots of room for improvement.

This game gave us a snapshot of what these teams will deliver in the championship but as mentioned in previous weeks Limerick will have to make positional switches and also some changes if they are to fully express themselves.

Many of the mistakes that were made in this game have been made in other games and at some stage John Kiely and his management team will have to act. Placing faith in players is an admirable quality but for the long term development of the team the time has come to have a serious look at the spine of the team. This has been a good league for Limerick and progress has been made. They have the ingredients and now it’s a case of making sure the right players are in the right places.

It’s heartwarming to see our county back mixing it with the bigger teams. More over the supporters are and will respond when a team is going in the right direction. One of the most satisfying things about this game with Tipperary and other games was that this team were not willing to give up. I really liked the bottle they showed. That is such a great quality in a team and while many of these lads are young they certainly are showing a hunger and confidence that has given the entire county a boost.

The last three games that Limerick played in the league will stand to them. Those games against Galway, Clare and now Tipperary are the kind of games that bring players and management along.

Two areas of Limerick's game that needs serious attention is their shooting and decision making. Some of the wides were really poor and this has been common in many of their games. Those wides have proven costly to Limerick and they need to be much more clinical. Tipperary on the other hand were clinical. They used the ball well and showed far greater economy than Limerick.

Had Limerick took the many chances that came their way particularly in the first half the outcome could have been so different. Some of the wides were terrible and often the player with the ball made really bad choices. I have long been a fan of Diarmuid Byrnes. His arrival on the senior team has added much needed bite. He has shown his ability to hit long range points but he has also shown his ability to hit a scatter of them wide. Pot shots from long range are great if they go over but when they don’t it puts huge pressure on the team. Don’t get me wrong I like how Byrnes has the bottle to shoot but he must play a more percentage game and that way both he and the team will benefit.

It took a lot of courage and hard work to haul back Tipperary on a few occasions during this game. Limerick looked in real trouble a few times but you would have to admire how they fought their way back. That was a tradition many great Limerick teams had, I am delighted to see that returning. It has been missing for sometime and thankfully we are going in the right direction.

Limerick showed great qualities to finish level with Tipperary in normal time. Tom Morrissey showed some steel to score what was a difficult free. He worked hard throughout and could well have finished with a couple of goals had he taken a couple of extra steps and not opted to hand pass.

In extra time Tipperary were gifted a goal when a mistake by Nicky Quaid went straight into the hands of Tipperary forward Jason Forde. He blasted it past Quaid and that was a major turning point in the game.

When the same player found the net a second time Limerick were always going to find it difficult to recover from that. The Limerick full backline struggled and they were badly caught for Forde’s second goal.

Cian Lynch had a fine game once again and his movement of the ball was really important. Paul Browne was a help to him when he came off the bench and this is an area that Limerick will need to be very strong in. I expect to see Ronan Maher and Brendan Maher here when Limerick face Tipperary in the championship.

Losing Aaron Gillane was a blow to Limerick but he should possibly have gone off much earlier. He struggled with an ankle injury but to his credit he worked very hard despite his injury.

When Limerick kept the ball moving fast they troubled Tipperary but when it was tight and close Limerick were exposed by Tipperary. Referee James Keenan from Wicklow left a fair bit go and a couple of Tipperary players were lucky to stay on the field. Tipperary were strong on the tackle, they didn’t hold back and it was like they wanted to leave a few reminders for the championship.

What was very evident in the game was the honesty expressed by both teams. They gave it their all and the crowd loved it. Shooting sixty five scores between them provided great excitement but then again I was not surprised as these counties always bring out the best in each other.

Playing well is one thing but Limerick lost and from this game the management will have lots of questions that will need to be answered. Jason Forde caused all sorts of problems for Seamus Hickey and I think most people would suggest that full back is not his position. Mike Casey of Na Piarsaigh will be a contender to fill this and also Richie McCarthy. The Limerick half backline needs to be far more commanding. Byrnes is settled here but Declan Hannon and Dan Morrissey need to attack the ball more. Kyle Hayes has to be a serious option for centre back and it’s vital that Limerick settle this crucial area very soon. The Limerick defence have a habit of giving away a lot of frees and that is something that needs attention. Games are won by fine margins and mistakes will be punished.

With only a few weeks to championship we can certainly look forward knowing that the team will battle. They have made good progress but that game with Tipperary will have provided them with many positives and if they can build on it then they will test many teams in the championship. Tipperary will be happy also. They have some big players to come back and it’s all pointing to a massive opening of the Munster championship in the Gaelic Grounds.

The battle to make the starting fifteen will be stiff but that is a great position to be in. For far too long it was very predictable but thankfully every player will have to give his all in training and matches for the next few weeks. The challenges facing manager John Kiely and his management team is to get the best players in the right positions.