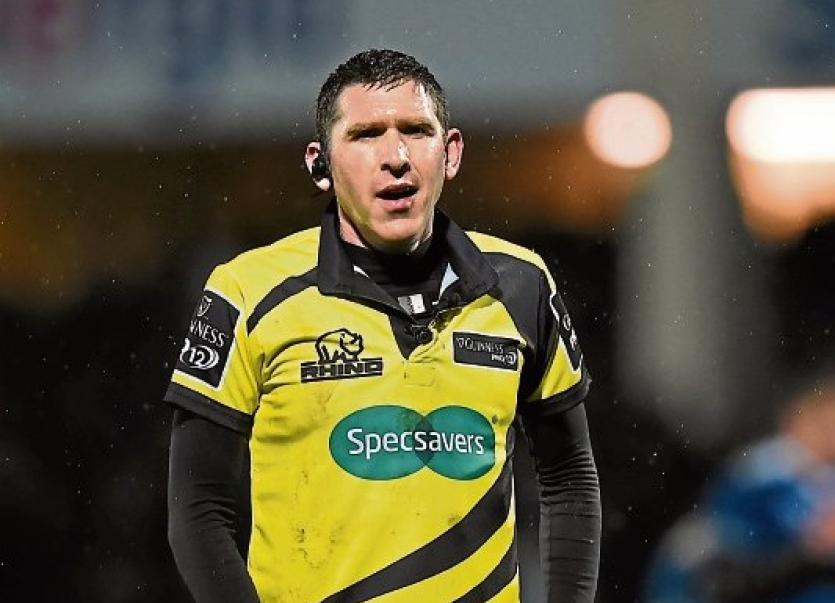 This weekend Limerick referee George Clancy will become only the second referee to reach a century of appearances in the Guinness PRO14 when he takes charge of Scarlets versus Glasgow Warriors on Saturday.

Last year, Nigel Owens (WRU) made his 150th appearance in the Championship and will now be joined by Clancy as the only match officials in the Guinness PRO14 to have made 100 or more appearances.

Last October, Clancy was one of seven IRFU match officials to become a full-time professional after a career which has seen him appear in two World Cups and take charge of vital knock-out games in both the PRO14 and European competition.

Greg Garner, Elite Referee Manager for PRO14 Rugby, congratulated Clancy on this significant career achievement: "In my first season involved in the PRO14 it’s been very reassuring to have a core of experienced referees such as George Clancy to select from. It’s often pointed out that the referee’s job is a difficult one, but it is an even greater accomplishment to persevere and establish a career as an international match official.

"George has refereed at the highest levels of the game at club and international level and becoming just the second official to reach the century mark in the Championship is a great credit to him and the system he has come through," Garner added.

"This season we have done a lot of work to strengthen our processes around preparation, performance and review while working even closer with the Referee Managers across all of our participating unions. It is rewarding to see a number of officials make their debuts this season, but the role played by the likes of George, Nigel Owens and John Lacey ensures that our next generation of referees have a high standard to emulate."

Dudley Phillips, IRFU Head of Referees, commended Clancy for the example he has set: "We’re delighted to see George reach this milestone, it is a testament to his dedication to refereeing. He is widely respected throughout the PRO14 and the refereeing community. From his club roots in Bruff to the international stage he sets an example for younger referees to follow."

Clancy Profile
The IRFU match official made his Championship debut on October 15, 2004 taking charge of Borders versus Newport-Gwent Dragons in a game that finished 14-6 in favour of the Welsh side.
From there Clancy made his first appearance in a European Shield match in December of 2004 before taking charge of his first European Cup game in January 2005, overseeing a Bath away win in France against Bourgoin.

In 2009, Clancy held the whistle for the European Challenge Cup Final, a fixture which he would again officiate in 2011. In total, Clancy has made 89 appearances in Europe which is second only to Nigel Owens.

His international debut came in June 2008 when Clancy was appointed to South Africa versus Italy. Since then the 40-year-old has appeared at the 2011 and 2015 Rugby World Cups making a total of 47 appearances at Test level.