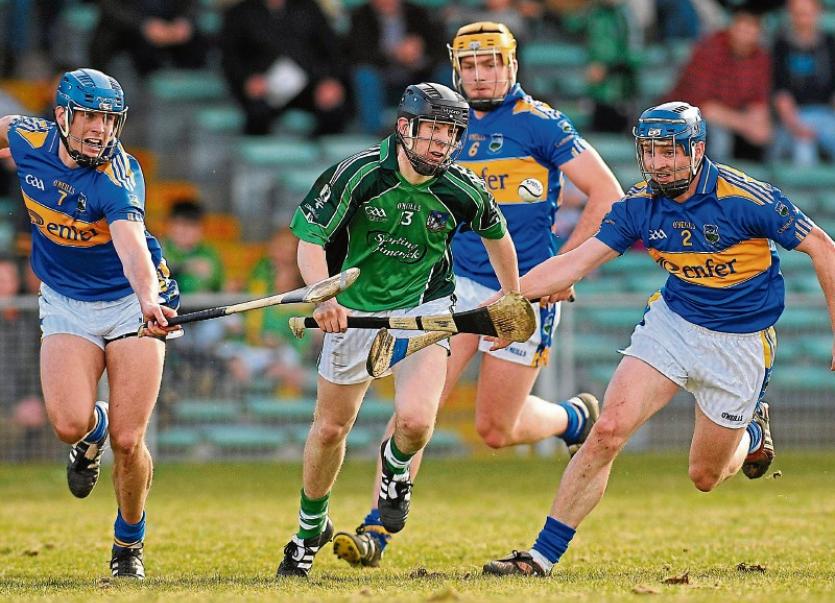 Last time out: Graeme Mulcahy, Limerick, in action against, from left, Hugh Maloney, Padraic Maher and Paddy Stapleton, Tipperary when the two sides last met in the league in 2010

REACHING the April 8 Allianz Hurling League final would be a “big step” forward for Limerick according to inter-county manager John Kiely.

Limerick bring a nine game unbeaten run into Saturday’s league semi final in Thurles, which the Shannonside manager feels will be the biggest test of the season.

“We are in with teams now that are all contenders and good quality sides and games are going to ebb and flow and we have to accept that we are not going to dominate games at this stage of the competition like we might earlier in the league,” said John Kiely.

Winning promotion from Division 1B was a welcome milestone after eight years outside of the top flight but Kiely isn’t getting carried away.

The last two games against Galway and Clare put Limerick in the spotlight.

“There is a lot to be taken from the manner of the last two games - the fact that they were down a good number of scores from the outset. People might say it was a slow start but in essence when you analyse it we did create a lot of chances but didn’t convert while the opposition were that bit more efficient at that stage of the game so were creating the chances, just not converting,” he explained.

“There was no panic or internal concerns within the team that they couldn’t keep going to the end.”

“There is great resilience and honesty there but we've got to keep it going,” he said.

“In our performances to-date the hallmark is our work ethic and the intensity we bring to the games and the consistency of that from start to finish in the matches. They can be hard to find at times and can take a bit of time - this is still a very young team but they are quick learners and have been through the mill so we don’t see any reason why they can’t push on,” he stressed.

“Focus is very firmly on Saturday and trying to produce a decent performance and see where it takes us – it would be a big step there is no doubt about that.”

He added: “It has brought us further along the road towards championship and has narrowed the gap between league and championship. For us Saturday is about picking out our best performers and concerning ourselves with our own game to try play as best as we possibly can and see where we go from there”.

Consistency is the target of all but the Limerick manager is content with progress.

“Tipp had a poor start and were 10-2 down at one stage - consistency is hard to get at any time of the year because the opposition is so good that they are bound to get a patch in the game where they are going to have dominance and it’s about minimising the effectiveness of that dominance at that time and maximising your own purple patch.”

Tipperary are the hot favourites to beat Limerick and win the league title – the men in green are listed as a 9/4 chance to beat the 2/5 favourites on Saturday.

He added: “I think there are four teams that are very real in their ambitions to get to the final and there should be two full-on encounters”.

“They have been very impressive, without pushing it - they rotated their panel in a big way and tried out a lot of players. They showed a great capacity to look after the opposition teams,” said Kiely.

“They got to the league final last year and the fact that they didn’t win the title means that we are expecting a very tough battle on Saturday. For us it’s about picking out our best performance and concerning our on own game to try play as best as we possibly can and see where we go from there.”

The Limerick manager gave his players a rest period after sudden death frees were needed after 100-minutes failed to find a winner in the St Patricks weekend Bank Holiday Monday quarter final with Clare.

“We didn’t go back until Thursday night after the Monday and they needed it all - it was a long long evening’s hurling and took a bit of time to recover from to be honest. They should be very fresh for this weekend.”

Limerick won't rush the Na Piarsaigh players back in to action for Saturday confirmed Kiely.

“We will be giving the Na Piarsaigh players a break - they won’t be considered for Saturday,” the Limerick manager confirmed.

All bar one of the remainder of his 43-man panel are available for selection.

“We are as good as we have been all year - we have only a few knocks that will be gone by Saturday. Darragh O’Donovan is going to return to training this week hopefully and obviously won’t be involved on Saturday but it’s good to see him get back on the pitch with a hurley in his hand - his recovery has gone extremely well and he got a lot of physical work done in the meantime so he is in great shape just to get some hurling into him,” explained Kiely.

While the Doon man won’t be involved, there is better news on Barry Nash (knee) and Graeme Mulcahy (concussion).

“Barry Nash is fully back in training - he has a number of weeks training and he played a full match with us on Saturday and he is 100%. Graeme Mulcahy is back from his return to play protocols - he went through the procedures set out and came through with no setbacks and he trained last Thursday and played with us on Saturday, so he is 100%,” outlined the Limerick hurling manager this week.