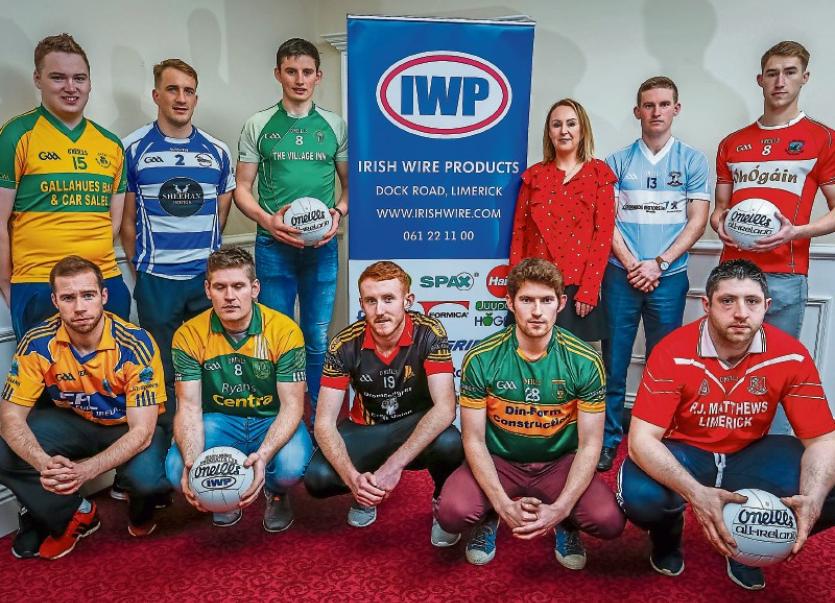 Representatives from the Limerick Senior Football clubs in this season's championships

THE Senior and Intermediate club football championships return this weekend in what should be an exciting long weekend of club action.

The Irish Wire sponsored Senior football championship begins on Thursday night with two giants of the Limerick game meeting in Knockaderry at 6.30pm.

Holders Adare face the almost evergreen Drom/Broadford in the opening game of group one. On the same night city sides Monaleen and Na Piarsaigh get their senior championship campaigns underway in Claughaun. Again, that game throws in at 6.30pm.

The final game in group one sees Ballylanders take on St Senan's in Kilmallock at 6.30pm on Friday evening.

Group two in the senior grade gets underway on Friday night also as Oola face Fr Casey's in Bruff, again at 6.30pm. In what is somewhat of a staggered start for group two, St Kieran's will take on Ballysteen on Sunday evening, while Newcastle West and St Patrick's will lock horns on Tuesday April 3.

While the senior championship might be the top tier of the local football hierarchy, there will be few more hotly contested championships this season, nationwide, than the Griffin's coaches sponsored Limerick intermediate football championship.

Group two of this highly anticipated new season sees Galtee Gaels, Castlemahon, Gerald Griffins, Mountcollins, Galbally and recently relegated Rathkeale do battle in what should be a very tight group.

“The format has worked quite well for the last number of years. If we cast our minds back to the last weekend of last season there were some teams who could both be relegated and promoted in the course of a round. That is a good thing for all of the teams and the sponsors too”

Defending champions Adare, who have brought in former Limerick senior manager Maurice Horan to coach the side, are fully aware that the target is on their backs this season, following their surprise county title win last season.

“We don't think about it like that really” added Adare manager Harry Gleeson.

“I have a motto. You never lose, you only win or you learn. We decided last season to look after ourselves only and we would take it from there” the county winning coach added.

Speaking about the addition of Horan to his backroom team, Gleeson admitted that his players deserved a coach of that calibre.

“The players deserve coaches like Maurice Horan and Niall Crowley. If we were to appoint anyone else below that level, we would have been taking a step back. The lads want to be pushed and they want to learn more”

On the prospect of facing Dromcollogher/Broadford in the opening round, Gleeson is expecting a really tough game.

“I expect them to be waiting for us in the long grass. If I was their manager, that is what I would be doing” he smiled.