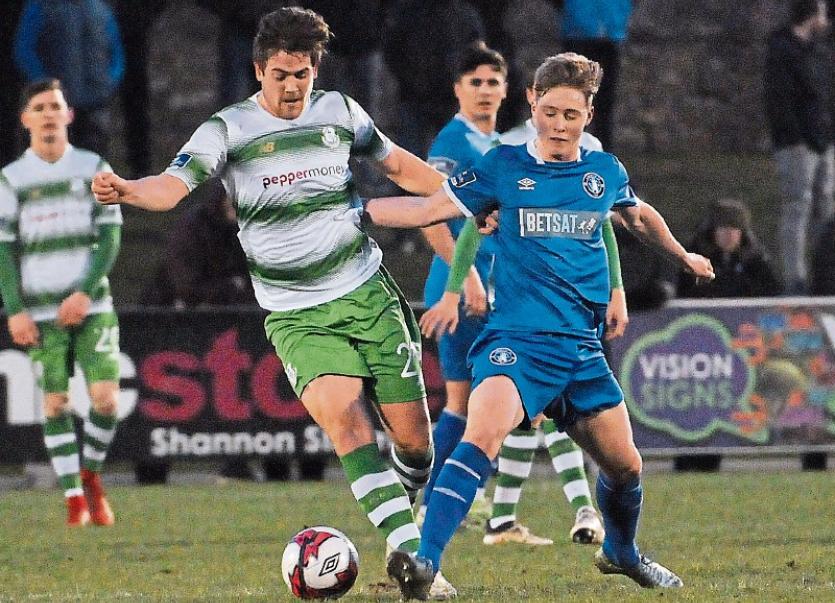 LIMERICK FC will look to bounce back from their opening home league defeat of the season on Bank Holiday Monday when facing St Patrick’s Athletic at Richmond Park this Friday, 7.45pm.

Tommy Barrett’s Limerick side, who have taken eight points from their opening seven fixtures, remain sixth in the SSE Airtricity League Premier Division table, despite Monday’s 1-0 defeat to Shamrock Rovers at the Markets Field.

Limerick have been hit by a lengthy injury list at an early stage of the season. The Blues were minus the services of the likes of Daniel Kearns, Eoin Wearen, Danny Morrissey, Shane Tracy, Colm Walsh-O'Loghlen, Mark O'Sullivan, Darren Dennehy and Barry Maguire for the Hoops game.

St Pat’s scheduled game on Monday was postponed due to the weather.

Manager Tommy Barrett said: “We will have to play a bit more obviously up in Pat’s.

“Every game is tough, no matter where we go or who you play, it is going to be tough. The thing about it is to keep our defence as tight as possible and see can we get something.

“We will have to wait and see who we have available for the St Pat’s game. Shaun looks like he got an ankle knock there again.

“Can we get a couple of lads back for Friday night? There are a few of them a long way off, but hopefully we can get one or two more back.

“Shane Tracy is due back for St Pat’s. Darren (Dennehy) we are hoping will be back as well. Barry Maguire will be touch and go, I’d say for Pat’s.

”Daniel Kearns and Eoin Wearen are a couple of weeks off, Danny Morrissey could be next week or the week after and then we have Mark O’Sullivan who is probably three weeks away from a return. Colm Walsh-O’Loghlen has been sick, so he should be back this week.”

Reflecting on Monday night’s 1-0 defeat to Shamrock Rovers, Limerick captain Shane Duggan said: “To be honest, I don’t think there was that many chances in the game. To give away the penalty was very frustrating.

”I thought we held them quite well although we didn’t really create many chances ourselves. That is another penalty given away now. We have had two tough games.

“We just need to bounce back on Friday night against St Pat’s.

“The young lads came in and did very well. We are down a few bodies from injuries and it is tough on them.

“Young William Fitz (Fitzgerald) was excellent again and hopefully with that bit of experience he can push on.”

Duggan said: ”Obviously going into every home game you are looking for a positive results. We are realistic too. We have played against the champions (Cork City) and I thought we did very well against them.

”Against Shamrock Rovers we probably didn’t play as well as we did against Cork, but we held them. They didn’t really create too many chances and I think the longer the game went on we were frustrating them as well.

”They started going more direct. One point from two home games against two good teams is not the return we would have wanted, but it is still not the end of the world.

”We have a lot of good games coming up and we have to start picking up three points now.

“We have a very young squad now at the moment. We are down bodies. They are still bedding into the league. I think they are doing very well.

“I think the way they (St Pat’s) play, they are more open, with the way we shape up, we might catch them on the counter attack and that is what we will be looking to do.”