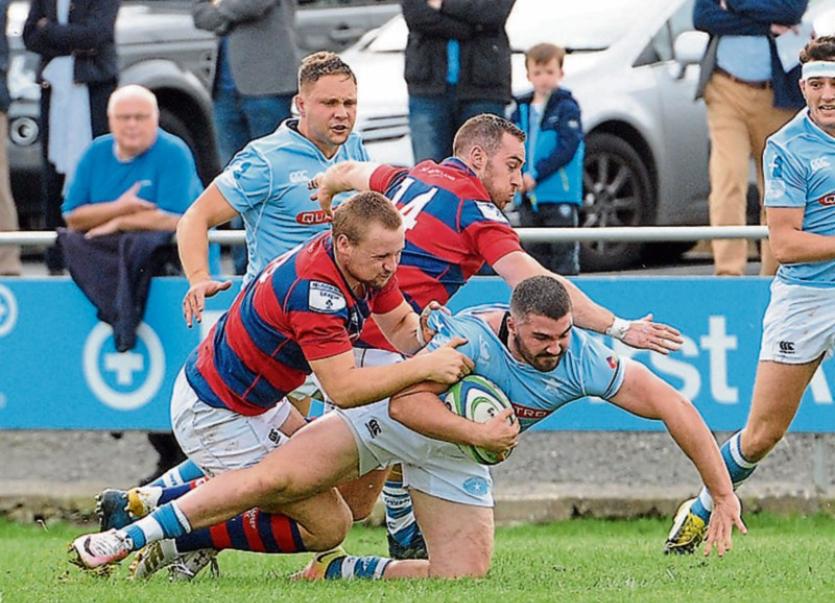 Sam Arnold in action for Garryowen against Clontarf

SAM Arnold admits he would probably have ‘laughed in your face’ if you told him he’d go from playing with Garryowen in the Ulster Bank League last autumn to being called up to train with Ireland’s Grand Slam winning squad this spring.

But that’s life as a professional rugby player, you just never know what’s coming around the corner. And Arnold is quick to stress the importance of being ready to grab an opportunity when it arrives.

In contrast, the former Ireland U-20 international has made 10 starts for the province since November, including the two big Champions Cup fixtures against Leicester in December.

Arnold recently signed a two-year contract extension with Munster which will keep him at the province until June 2020.

Reflecting on how his career at Munster has hit top gear since the autumn, Arnold said:

“It’s been strange, no doubt about that.  If you had said it to me at the start of the season, I’d probably have laughed in your face.

“For me personally, it’s been great to get that experience in camp and be in the squad for the last two games. It’s nice to see what it takes to win a Grand Slam and the work that goes behind it.

“They all have Grand Slams now but they are guys you learn from and growing up you would have looked up to.

“You pinch yourself sometimes when you’re in there and try to soak up what you can and learn off as many of them while you can.

“To get that look at what it takes to win a Grand Slam, there was so much that went into it and everyone played a part in it.

“It was awesome to see what it takes to go that next step and I’m very grateful that Joe (Schmidt) gave me the opportunity to be  in there.

“But from here on, for me it’s about focusing on Munster.  The next two weeks are massive and they are going to signify how the season goes come May.

Asked how a professional rugby player can ensure he is as ready as possible to take his chance to step up when called upon, Arnold said:

“It’s so physical, you’re always going to be looking after something during the training week and make sure it’s 100% for the weekend so you can go full throttle.

“You have to rehab, you have to manage and play with it and get it right.  It’s part of the game.”

Munster kick-off the business end of the season this Saturday when the Scarlets arrive at Thomond Park for a crucial Guinness pro14 fixture.

Munster’s lengthy injury list provides an opportunity for other squad members to impress a week out from the glamour Champions Cup quarter-final clash with Toulon at Thomond Park on Easter Saturday.

“We have had guys who stepped in before and they have managed to do a job.  But this is the crunch time of the season.”