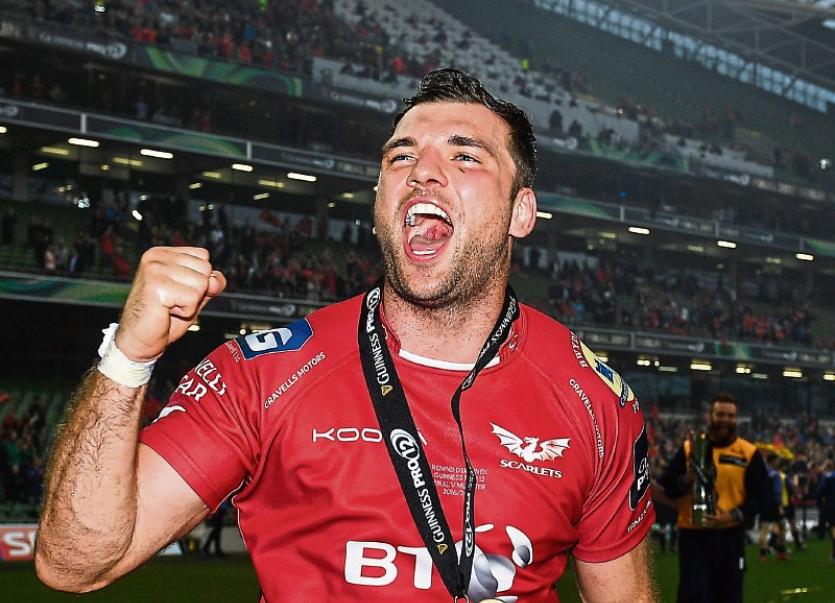 Tadhg Beirne of the Scarlets who will join Munster next season

INJURY-HIT Munster face their final run-out before the glamour Champions Cup quarter-final with Toulon when the Scarlets visit Thomond Park for a crucial Guinness Pro14 fixture this Saturday, 5.30pm.

Munster suffered a disappointing 12-6 defeat in their Pro14 fixture away to Edinburgh on Friday night.

Munster have now lost seven of their 17 league fixtures this season. The province sits second in the Conference A table, 11 points off behind table toppers Glasgow Warriors.

Munster are seven points ahead of the third-placed Toyota Cheetahs and while well placed to secure a home quarter-final in the Pro14, Johann van Graan’s charges look set to be away at the semi-final stage should they advance.

Munster have been dealt a double injury blow this week with confirmation that out-half Tyler Bleyendaal and scrum-half Duncan Williams will miss the rest of the season due to injury.

New Zealander Bleyendaal required surgery in a bid to rectify ongoing symptoms with his neck, while Williams underwent surgery after sustaining facial injuries during a training session last week.

Munster head coach Johann van Graan expects Keith Earls to be sidelined for ‘quite a long time’ after suffering a knee injury against England last weekend. Earls is to undergo a scan for the injury and will require specialist assessment to determine the full extent of the injury he sustained in Twickenham during Joe Schmidt’s side’s famous win.

Munster head coach van Graan said: “I spoke to Keith on Saturday evening. I congratulated our Irish guys on their performance and exchanged a few text messages over the past two days.

“He (Keith Earls) was in a lot of pain. If you just looked at the clip, he seems to be in a bit of trouble and knowing Earlsie he is quite a tough man.

"He has been through a lot and just watching the footage if you look at him celebrating in the circle afterwards he jumped on one leg, so like I said, I don't have any medical confirmation at this stage, but I fear he is going to be out for quite a long time.”