Martin Kiely: Limerick's honesty and work rate are paying off 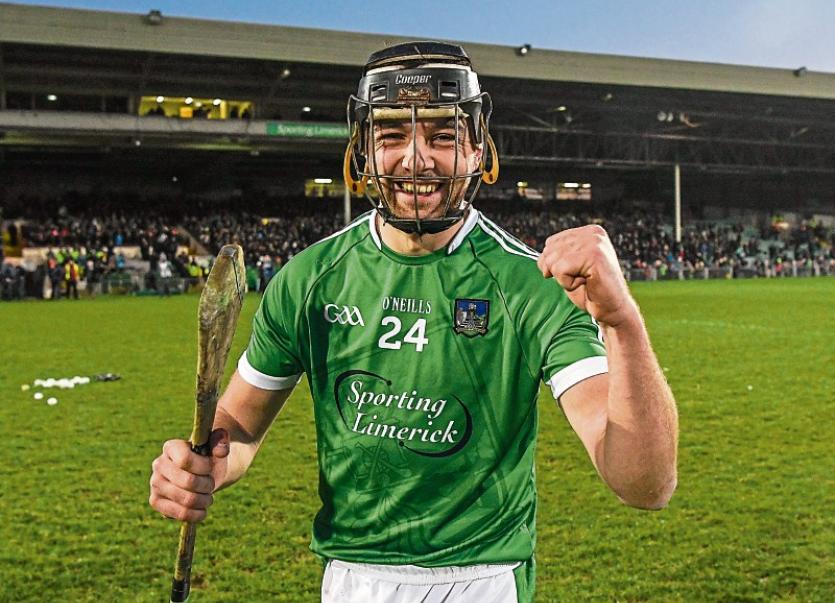 For the first time in the history of the National Hurling League the outcome of such an important game was decided by a free taking competition.

It was a case of high drama last Monday evening at the Gaelic Grounds when after almost three hours, a free by Colin Ryan sealed Limerick's passage to the National League semi final.

That was a historic score by the Pallasgreen man and while it was a cruel way to decide a game from a Limerick point of view it was yet another major step forward for the development of this team.

Limerick showed great battling qualities to stay in this game. Like in previous games they started slowly and were behind by eight points after twenty odd minutes. Clare had the wind and they made Limerick look very ordinary as they won most ball in the air.

More concerning was that Limerick didn’t look to have the same sort of work rate as Clare. Limerick struggled in key positions and were badly exposed around midfield where Tony Kelly and Colm Galvin were dominant.

One issue that requires major attention by Limerick is the number of frees the backs are giving away. Clare ran at them and time after time the Limerick defence were forced to give away frees. Peter Duggan was really sharp for Clare and finished the game with 0-19 points to his credit.

To compete at the highest level you need a player that stands out from the rest and in Aaron Gillane Limerick have a player that they have been missing for a while. He hit some great scores from play and frees but his goal after twenty three minutes started the Limerick revival. That score was badly needed because Limerick were outclassed by Clare up to then. They failed to compete for ball and many players allowed the game pass them by. In total Limerick hit twenty wides and some of them were really bad. It is good to see players shooting but at some point learning has to kick in. Those misses could have proved very costly but they got out of jail in this game. On another day they might not be so lucky.

Tony Kelly, David Reidy, David Fitzgerald and Conor McGrath were causing a lot of problems for Limerick and it took them a while to come to terms with them.

The goal by Gillane was followed by points from the same player and it greatly helped to settle Limerick. Gearoid Hegarty and Tom Morrissey worked really hard for Limerick. They continuously made the journey back into the half backline and their efforts had a telling effect on this game. Cian Lynch was busy at midfield but such was the dominance of Kelly he was not given much time on the ball.

For all of Clare’s hurling in the opening half they had only a three point advantage at halftime. Limerick had the wind in the second half but they needed more than that to get a hold on this game.

The introduction of Colin Ryan for Paul Browne turned the game in Limerick's favour. With his first effort Ryan scored a fine point and finished the contest with four to his credit. Ryan has buckets of ability and with focus he has so much more to offer. His biggest asset is that he has really good hands. Mix that with composure and balance and the ingredients of a top player are at hand.

Gillane flashed Limericks second goal to the net after great work by Tom Morrissey and Seamus Flanagan. Aaron Gillane showed a fair bit of class to score that goal and it really lifted Limerick. The match was turning out to be a battle now and I really liked the way this team are starting to battle. They didn’t give up, they stood up and while some players had a poor evening others came to the fore.

Clare were running out of gas and their management were now really concerned. They could see that Tom Morrissey was causing them trouble and that Hegarty was running at them. The Clare full backline looked shaky, they look like they are lacking in confidence and a forward can smell that. Pat Ryan was not long on the field and he rattled the net and that saw Limerick lead 3-15 to 0-21.

To Clare’s credit they did rally and some fine points from Peter Duggan saw them go one clear deep in injury time. Limerick got one chance and Colin Ryan showed some metal to have a go with a line ball from a very acute angle. Ryan’s score saw the stands lift as the game went to extra time. It took two periods of extra time and a shoot out to find a winner and when all that was done it was Limerick who move into the league semi final.

It fell to Colin Ryan to convert the magic score after Niall Deasy’s effort went wide. When I asked Ryan after the game how he felt about the score he said,

“Sure I am hitting points like that since I was seven or eight. It was just another free to me. I had to put it over and I didn’t feel any great pressure. It was as an important win for the team and it’s great to be one step away from a league final.”

From a confidence point of view this was a good win for Limerick but I am still not convinced by our defensive set up. Dan Morrissey tries hard but he has a habit of giving away frees and I don’t like how the half backline is losing shape.

Nicky Quaid was also shaky in goals and was lucky on a couple of occasions. These are the games that allow you learn about your team because they will find that teams will be less forgiving in the championship.

Limerick are making progress and those lads on the field are working hard but we need to learn from the mistakes that have been repeated against Galway and now against Clare. As it stands Limerick are in a great position to make the league final. Reaching a league final might not be too important to other teams but for Limerick it will provide valuable learning that could reap reward in the championship.

Playing two high tempo games in succession and winning is what many of these young players needed. Confidence is a vital tool in sport and it’s good to see players going in the right direction.

Sure it was great to win but supporters would do well to keep their feet on the ground. Big days and bigger challenges lie ahead. From now on it is about finding ways to make their efforts count. They are working hard but they need to take the chances presented. The forward line need to be more clinical. Many times players opted to shoot on sight when another player was better placed. Experience will see them improve on that but they are moving closer to a level that mistakes will be punished.

While I can pick out mistakes in Limerick's play, I have to acknowledge the honest effort of the players. They are working very hard and when a team does that they often are rewarded. The outcome of this game gave us an indication of the intensity we can expect in the championship and very little will separate Limerick and Clare when they meet in the championship in a few weeks time. For now we will take the win regardless of how it was achieved but making history and winning is what Limerick hurling people want to see more of.